But the scars of its economic crisis are slow to fade. 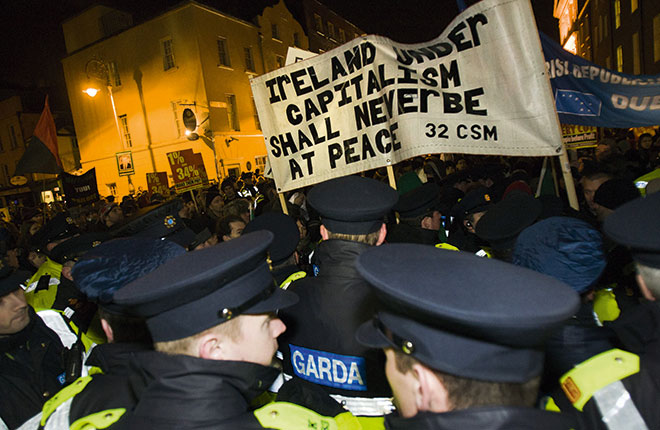 After a seven year sickness, Ireland is raising its head and leaving austerity behind. Intervention from the troika – the International Monetary Fund (IMF), European Union and European Central Bank (ECB) – has managed to straighten the accounts, the economy is growing once more and its debt is dropping, but Ireland is still nursing its wounds.

In 2008, the bursting of the housing bubble put the banking system under stress and dragged the island into a deep recession. Over the following two years, unemployment spiked from 5% to nearly 15%, the Irish Stock Exchange lost 75% of its capital value compared to its peak and the deficit soared to over 30% of its GDP.

Despite the introduction of new taxes and unpopular measures on education and healthcare, in 2010 the country was forced out of the bonds market. In November of that year then Taoiseach (Prime Minister) Brian Cowen – the leader of Fianna Fáil (the Republican Party) – confirmed on live television that the country clearly needed to request aid from the EU-ECB-IMF. “Do not underestimate the scale of our economic problems, but we must have faith in our ability as a people to recover and prosper once more,” said Cowan, explaining the urgent need to restructure the banking system, which at the time was on the verge of collapse.

As they’d done for Greece, the troika offered Ireland a substantial loan package in exchange for a strict reforms agenda. The €85 billion bailout was used to nationalize, and downsize, the major banking institutions. The initial upshot was that public debt rose to 126.9% of GDP.

Taxes were hiked, spending was cut and the country ended up ceding its sovereignty to international financial institutions, which the Irish saw as a defeat – especially when the scandals came to light. “We’re still paying for the crimes of the banks and governments,” says Odharnait Coyne from the town of Sligo. “After all the disclosures we’ve been forced to listen to, it’s us taxpayers footing the loans taken out to salvage us.” Most disconcerting was the storm surrounding the former chairman of the Anglo Irish Bank Seán FitzPatrick, who, having filed for bankruptcy, then admitted to having received €87 million in loans from the institution he headed.

“Those in power showed they were incapable of making the right decisions for the good of the country and in various cases proved to be corrupt,” adds Coyne, explaining how various governments were responsible for not holding financial institutions accountable during the years of the economic boom.

At the 2011 elections, Fianna Fáil, the party that had led the country for over two decades, plummeted in the polls – from 41.6% to 17.4% – and was overtaken both by their historical opposition, Fine Gael, and their ally, the Labour Party. Seen from the outside, the troika’s recovery plan has all the makings of a success story: in December 2013, the Irish Republic officially exited the bailout programme while earlier in May they had already returned to the international bonds market. Large US corporations like IBM and Amazon have gone back to investing in the country; others such as Apple and Google have had their European headquarters there for some time now.

The main attraction is the Irish taxation system and its 12.5% corporate tax. Maintaining this low rate was the only point the Cowen administration was unwilling to negotiate with the EU-ECB-IMF. The European Commission’s estimates at the close of 2014 are rosy: they see a 4.6% growth in the GDP, the public debt rapidly dropping to 110.5%, the deficit at a low 3.7% and an upturn in consumer spending, albeit a timid one. Yet the fear lingers among the middle class that this is just a flash-in-the-pan recovery.

“I’m convinced this so-called growth is nothing but a new bubble, and I don’t believe the crisis is over,” adds Coyne, who today works in Dublin and is clearly worried about the future of her two-and-a-half-year-old son. “It’s true employment’s risen, but since 2008 there’s also been a sharp rise in emigration. Plus there’s a new housing crisis, especially in town, where real estate prices increase on a daily basis, as does rent.”

Work is still a sore spot. Unemployment – currently standing at 11% – primarily affects young people, and university graduates are once again leaving the country. Samantha Di Gesaro Magee, a manager for an American multinational company, confirms that “many 25- to 30-year-olds in Ireland think it’s a better option to go abroad. They know they can’t put their degrees to use here.” She emigrated from Italy in the late 1990s, when Ireland was known as the ‘Celtic Tiger’ and drew young people from all over Europe thanks to a booming economy. Today, this trend is inverted: since 2010 the migration balance has been negative.

“My sister-in-law says hers is the forgotten generation, which was forced to emigrate again”, says Di Gesaro Magee. “Seven of her closest friends are now in Australia and two of my husband’s architect friends went to New York in search of opportunities.” Yet the greatest paradox lies in the real estate sector which caused the crisis. Outside Dublin there are plenty of half-finished new residential buildings and rows of terraced houses that remain unsold despite 50% price drops.

In the city, however, the market is up and running again and in August property prices were 25% higher than the previous year. From one week to the next, sellers’ asking prices fluctuate by thousands of euros and homebuyers can’t be seen dallying. In other words, a long, cold season is drawing to a close, the remedy worked and the fever has come down. The patient, however, doesn’t seem to have learned to bundle up appropriately.