It is included in this year’s expansive economic budget, as it was in 2018. Yet there’s still no sign of public investment

The budget that was despatched by the Italian Parliament was very different to the one they first set eyes on, even though it was approved without discussion and in fact, without the members of that same having any chance of knowing what was in it. But is it after all very different from those of previous governments? Three key words can provide an indication of how much it differs from the past: safeguard clauses, interest payments, investments. The safeguard clauses are an Italian speciality, cooked up for the first time in 2011 by the last Berlusconi government and then confirmed year after year by Monti’s technical government, the three centre-left governments headed by Letta, Renzi and Gentiloni, and now by Salvini-Di Maio‘s right wing one. The other two are significant outlays, found in all state accounts but crucial for the Italian one. A country whose public debt is among the highest in Europe, while its public investments are among the lowest.

Safeguard clauses, aka bear traps – designed to snap into action if the funds can’t be found any other way – are a staple of Italy’s public finances since the year 2011. They were conceived by Giulio Tremonti, Berlusconi’s finance minister, at the height of the European sovereign debt crisis. Tremonti’s clauses differed slightly from their successors, as they offered two possible alternatives, both equally painful: a horizontal cut of expenditure or an increase in VAT.

Since 2015 the trap is a one way street, the only option is to raise VAT rates. It’s a form of guarantee offered to the European Commission and is supposed to ensure compliance with the shifting parameters of the deficit/GDP ratio. It is also binding for the national government.  Which for the past seven years has used most of its budgets to cover these clauses. And from the outset this has always at least partly been achieved by more deficit spending, which increases the state’s debt. It’s a paradox: I agree to guarantee clauses so that I won’t exceed the deficit, and then I increase the deficit to cover them. Though with the centre-left governments this coverage was achieved by agreeing the level of deficit allowed, by negotiating this flexibility. This time, with the first budget produced by Europe’s first populist government, the negotiation took place after the budget had been approved, with a second draft, while the original one was simply a blatant attempt to unhinge those same European constraints. The difference may seem just more psycho-politics, but seeing as the economy feeds on expectations, the repercussions were no small matter, owing to the rise in the spread and the resulting additional debt interest payments negatively affecting the books.

This, however, is not the only difference. The other one concerns the timing of the trap. Even the Conte government, like the previous ones, has limited its clause coverage measures to the first year (a practice that the Parliamentary budget office (PBO) has criticised, as it breeds uncertainty). But this time the current government hasn’t just postponed the trap snap in the short term – a year – it’s gone one step further: it has expanded it for the two following years. So that now we find ourselves facing a programmed increase in VAT and taxes to the tune of 23 billion euro in 2020 and almost 29 in 2021 (9, 4 and 13 billion more than the amount ‘inherited’ from the programmes of the previous governments). The triggering of the clauses would raise tax burden as high as 43-44% (figures provided to Parliament, as estimates, by PBO President Giuseppe Pisauro when answering questions from MPs), an increase of between 1.2 and 1.5 GDP points.  If instead the clauses are ‘defused’ without alternative coverage, the deficit/GDP ratio will rise to the fateful 3% threshold for both 2020 and 2021.

We were reminded of this by European Economic Affairs Commissioner Pierre Moscovici: Italy spends more on interest every year than it does on education. The cost of honouring debts with Italian bond holders (30% of which live abroad, a share that is now dropping significantly) amounted to 83.6 billion euro a year in 2012, at the height of the sovereign debt crisis; and gradually dropped down to 65.5 in 2017. This was due to the drop in interest rates and the spread between Italian and German securities, two events that were determined by the ECB’s quantitative easing programme and the line of negotiation opened between the Italian government and the European authorities.

Both these conditions have changed during 2018, partly owing to the scheduled pullback on QE  and the initial defiance shown by the Italian government towards the European Commission. Interest expenditure started to rise once more during the second half of 2018, when the spread was riding high and Italian treasury bonds interest rates were on the up. The Bank of Italy did the math when asked for its opinion on the budget: in the second half of 2018, the shift in expectations has increased interest expenditure by 1.5 billion (for June-November). According to BankItalia’s estimates if interest rates don’t back off the cost of servicing the debt will rise by 5 billion in 2019 and 9 in 2020. After the agreement with Brussels, the tension dropped, but it could rise again shortly, partly owing to the knock-on effect experienced by Italian banks, whose assets may be weakened further if the value of Italian treasury bonds continues to drop.

The latest Technical Note issued by the Ministry of Economics and Finance still expects interest payments to drop slightly, but in all likelihood this figure will have to be reviewed in the final accounts. And, as a ratio of GDP, the official projections already indicate a U-turn in the coming years: a rise in expenditure, estimated at 3.7% in 2018, 3.8% in 2020 and 4% in 2021. The tendency to reduce the ratio between debt servicing and GDP which began in 2013 (when it stood at 4.8%) has now been reversed. And this is probably the most significant difference in the recent economic policies: the already considerable resources we have to pass on from the public accounts to rentiers are now increasing once more.

The uncertainty doesn’t just affect the spread. But, as the PBO president Pisauro mentioned in his aforementioned audition, it also affect the budget’s expansionary impact. The multiplier of public expenditure or lower  taxes, that number on which the world’s top economists have come unstuck (to the point that the IMF had to own up for not having foreseen the devastating effect that the austerity policies would have in times of crisis), also hinges on the credibility of the government that is implementing the measures in question. As well as the type of expenditure: however uncertain the estimates on the multipliers, there’s almost unanimous agreement that investment spending is more “profitable” than current spending. But then there’s an equally unanimous tendency for governments to prefer current expenditure. The centre-left budgets did so (with their 80 euro a month bonus and tax rebates, right up to the last public employment contracts), and so does the 2019 budget, to an even greater extent, with funds earmarked for a ‘basic income’ and pensions. Italy’s public investment expenditure since 2008 has dropped at an average rate of 4% a year; in ten years it has dropped by one point of GDP. In the first version of the populist’s budget there was a small rise, which was later cut to reduce recourse to deficit spending and meet European parameters – even though the Commission had underlined a “deficit” in public investments in Italy. A deficit which at present no one seems to care about. 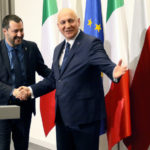