The return of reason

Twenty nine, fourteen, seven: Or twenty nine billion in total, 14 of which to be sourced from fresh resources, half of which (7 billion) supposedly to be found by fighting tax evasion. These are the most important figures contained in the Update on the Economic and Finance Document (NADEF), which is the first economic planning document produced by the new government, the one that outlines the general picture which will be filled out with the actual provisions that will produce the economic budget for 2020.

A few essential aspects of the picture were already established, partly as a result of the international circumstances and European policies, and partly due to a series of decisions taken by the previous government. Among them, the one with the most impact is not the budget presented exactly one year ago for 2019, the one that took the EU to task before being reigned in but not before producing considerable economic fallout in terms of debt servicing costs, but rather the budget adjustment tabled last June. Approved almost on the sly (with the two main majority shareholders of the League-5Star government both absent at the time), this measure avoided the infringement procedure that the European Union had already embarked upon. The other crucial factor has been the change of majority and government, which removed the prospect of a new clash with the European Union and the resulting repercussions on the risk assessment of its public debt, delivered in terms of spread points. As a result of these political and economic dynamics, the deficit trend – meaning what would take place in 2020 without any economic measures being introduced – has dropped, granting the government a certain amount of leeway before it rises again by asking Brussels for the equivalent flexibility; and, what’s more, the cost of servicing the interest on public debt securities has also dropped.

The latter is the real “treasure trove” right now: at the start of the year, as the Bank of Italy underlined during its audition on the NADEF, Italy’s sovereign spread amounted to 270 base points; at the end of May, with the previous government insisting it intended to introduce a flat tax regime costed at more than 30 billion while also paying off the VAT clauses, a package worth 54 billion in  one go, the spread had risen to 300 points; and had then dropped back down to 140 points, a level below that published at the start of 2018. In terms of GDP percentage, this means that public expenditure to service the debt will drop by 3.2-3.3%. But it’s worth looking at what this means in real terms: interest on debt, which amounted to 64.6 billion in 2016, will drop to 61.3 billion in 2019 and to 59.2 billion in 2020. We are still the European country with the highest debt servicing burden, but it hasn’t grown any further and we are actually back on a path towards its gradual reduction. If things are to stay this way, much will depend on the government’s credibility, but more importantly on the choices made by the ECB, which for the time being seems intent on continuing its expansive policies, and on international financial stability, which is instead much less predictable given the storm clouds brewing over Washington and London.

While the new picture we’ve just outlined shows the opportunities and the constraints affecting the up-and-coming period, the contents of the measures are also, partly, predetermined. In particular, the main issue to be addressed by this measure is the actual reason for the birth of the new government: avoiding a rise of VAT. A sum of 23.1 billion euro has been set aside for this purpose, amounting to 1.3% of GDP. Is this measure expansive? Of course, if we consider that if no measure were introduced this tax increase on consumption would immediately weigh down the private sector of the economy. But one thing is avoiding a fall, another is getting a push in the back. The latter is one of the intentions of this government, highlighted in writing in the NADEF with a broad programme of fiscal stimulus, “that is not just meant to ward off cyclical weakening but should also forcefully address structural issues such as the lack of public investment, climate change and social tensions, in order to build a new paradigm for sustainable growth on a social and environmental level based on technological innovation and skill development”. A Green New Deal, a closing of the social gap, a new economy and value given to human resources: all of this to be achieved with what’s left of the budget once the VAT burden is lifted, meaning 6 billion euro. Part of which, it should be noted, is already earmarked for expenditure that has already been planned and to renew lapsing measures.

If we set aside all the rather impromptu proposals that every minister and political entourage has seen fit to bandy about during the days when the budget was being prepared (such as for example a family bonus), what has actually been put down in writing and the Finance Minister Roberto Gualtieri is insisting on is a reduction of the tax wedge, meaning the taxes and dues levied on labour. For this measure, that both the industrialists and the trade unions are calling for, a sum equal to 0.15% of GDP has been set aside for 2020, which will increase up to 0.3% of GDP in 2021. It’s not much but, as the minister points out, it’s a clear indication of the way forward. To do more, one would have to delve into the resources committed to redistributive measures decided by the previous government (citizen’s income and ‘quota 100’ for pensions) but this is currently not politically viable. Or, as part of the government would have preferred, one could have not completely stifled the VAT clauses, and thus allowed consumption costs to rise selectively on certain goods, ruling out those that have a greater impact on lower income brackets: but even on this front – unless something changes between now and December – there doesn’t seem to be a political consensus.

The expansive reach of the budget, besides the amounts and destination of the expenditure (or lower taxes), also depends on the coverage. This begs the question: how much of these 29 billion has to be financed by somehow drawing resources from citizens and corporations? According to the government’s plans, this figure stands at 14 billion. More than half the budget will be funded by expanding the deficit, which shall in fact rise from an estimated 1.4% – meaning the deficit that would be achieved if policies are not changed, including the rise in VAT – to 2.2% of GDP. Last year the League-5 Star government had set its deficit increase objective at 2.4%, which, after being censored by Brussels, it reduced to 2.04% – and then it ultimately reached 2.2%, after the updates during the course of the year. In other words, we are once again creating more debt, with the consent (yet to be formalised) of the European Commission, thanks to new and more collaborative mood music and the awareness of certain specific requirements linked to the financial situation.

So we’re left with the 14 billion that still need to be funded. The lion’s share of this amount is supposed to be rustled up by fighting tax evasion: 7 billion. Both the Bank of Italy and the Parliamentary Budget Office, in their auditions for the NADEF, termed this goal as being extremely ambitious. But once again, as for the tax wedge, the underlying intent is what matters. The “fiscal compliance” meaning the rate of obedience in terms of taxation, is often linked to technical tools (and electronic invoicing has proven effective beyond all expectations) but also to a particular political and cultural climate. On which this new government is clearly relying, obviously more than on previous flagship undertakings of the past and now abandoned, such as the fight against the use of cash, which from now on will be waged using disincentives and incentives rather than caps and prohibitions. One number that has instead been removed from all forecasts, and which previous governments constantly overestimated, was revenue from privatisations: for this year, their estimated impact on GDP has been reduced from 1% to zero. For 2020 a more realistic figure of 0.2% is indicated. The other resources to be found through spending cuts and taxes to reach the 14 billion still have to be decided: the indication is that spending will be cut selectively, for example by cutting tax incentives that are harmful to the environment. 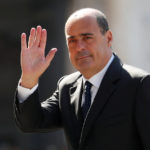 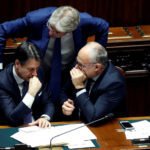 Italy back in Europe 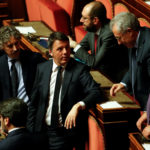