M5S and the League: Putin and the Italian constitutional referendum

There is something that links the major parties supporting the “No” vote to the constitutional referendum of 4 December: their love for Putin. And the fact that they go to Moscow, rather than to Rome, to corroborate their positions.

Really, you could wonder what the point might be of going to roll out a placard for the No vote on Red Square in Moscow. Just in front of the Kremlin. It’s what Matteo Salvini, leader of the far right Northern League party, did a few days ago.

It must be said that it wasn’t absolutely helpful. It helped, for example, to understand that his reasons are only related to his personal political design (the resignation of Renzi and his hope to become the leader of the right-wing parties’ coalition in new elections, see the placard) and to show Salvini’s fans what freedom looks like in Moscow. One minute after opening the billboard and having twittered the picture, two policemen approached and reminded him that in Russia any unauthorized demonstration is forbidden. Dobro pozhalovat, Mr. Salvini. Welcome to Moscow.

But the basic question remains. Why go to Putin to boast the support to “No”?

Everyone in Moscow screaming “No”

Salvini was preceded by a delegation of the 5 Stars Movement, officially to take part in an initiative for “No” organized by Italians in Russia. Welcomed as a state delegation by Russian television, the 5 Stars MPs went to Moscow to give more strength to their “No” in the referendum (against Italy’s PM Matteo Renzi). And even Berlusconi, as soon as he finished his personal calculations and having opted for “No”, is said to have sent his trusted emissary, Valentino Valentini, although we have no confirmation from Moscow. Anyhow, in the age of the post-truth that’s fine too.

Does Putin stand for “No”? Apparently Salvini answered the question without surprises. The Russian President, unlike Obama, hasn’t endorsed any of the choices. But there are many signs that seem to indicate a strong interest by the Kremlin in “No”. Such as the fact that RT – the Kremlin-backed multilingual tv spreading its disinformatsija around the world – has begun to sharpen its weapons (for example boosting the news of a few hundred demonstrating in Rome against Renzi while thousands were supporting “Yes” a few streets away), or Sputnik – the other means of disinformation, in Italian and 30 other languages – that linked the referendum to sanctions on Russia and Italian soldiers deployed in Latvia.

Whether the Russian media are endorsing the “No” or not, there is a common thread that ties together the anti-establishment 5 Stars Movement and lobby against sanctions, Salvini’s racist populism and the anti-European forces that elected Putin as their mentor, Berlusconi’s political calculations and the referendum: no one cares about the constitution. The reform of the constitution, supposed to be the subject of the referendum, is not the subject of discussion. Instead, the subject is the survival of the government, early elections, exit from the euro, the rage against Brussels and the use of migrants as scapegoats. The interest in reform is supplanted by the interest in political gains for a xenophobic and destructive International, made up of forces united only by the desire to divide, which fills busloads of political beggars heading to Moscow and social network profiles filled with anger and falsehoods.

It is obvious that Putin has no interest in the constitutional architecture of Italy, in the powers of the new Senate or the rewriting of Title V. He can however have interest in a vote that breaks the government, leads to new elections and makes it possible for anti-sanctions, anti-European, anti-euro, anti-Nato parties to govern Italy.

Sad to say, the popular vote has recently given some bad resultst, like Brexit, and the Dutch rejection of the Association Agreement with Ukraine. Hopefully Italy could be an exception.

Eurasian Forum, the political economic elite of Italy and Russia against sanctions 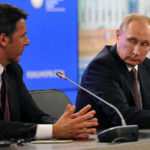 The Greater Eurasia, Putin’s idea of Europe after Brexit