A champion of a European Renaissance and a politician’s rather than an accountant’s view of Europe, Macron has not managed to avoid a crisis with Italy or overcome German and Northern Europe’s distrust

This article has been published in the May/June issue of eastwest.

The next European elections will coincide with the second anniversary of Emmanuel Macron‘s accession to the Elysèe Palace.

There’s no doubt that, with the chaotic Brexit on the doorstep, Angela Merkel heading into the sunset and other European governors with confused or short-sighted identities, over the last 24 months the French president has been the most visible figure during a critical season for the European Union.

Even more critical if considered against the backdrop of French society’s profound distress and the political climate that has prevented his two predecessors, Nicolas Sarkozy and François Hollande from being re-elected at the end of their first five year term in office (it had only ever happened before to Valery Giscard d’Estaing in 1981).

The circumstances that enabled Macron  and his novel political entity, La Republique en Marche, to with the electoral competion are well-known: the collapse of the Socialist Party, the implosion of the Republicains (buckled by the Fillon affair), the menacing advance of the Front National, the improvisation behind Jean Luc Melanchon’s left wing grouping, and finally the centrist faction set up by François Bayrou.

The common denominator of all these factors was once again that same “social rift” that had previously been singled out by Emmanuel Todd and taken on board by Jacques Chirac as a winning issue for his election to the presidency in 1995, but was also the cause of the fall of Alain Juppé two years later and the subsequent tiresome cohabitation with Lionel Jospin up to 2002.

Ever since his election it was clear that Emmanuel Macron was well aware of these sinister precedents that stemmed from the difficulties encountered by his two predecessors in their attempts to get broad sections of French society (almost five million public employees, rural classes undergoing transition, growing temporary employment, youth unemployment, chronic unrest in the suburbs) to accept a drop in public spending and the fearsome deficit foreseen by European commitments. During his visit to Berlin on 26 May 2017, in his press conference with the Chancellor, Macron stated that he had had to face the “rage” of the French and believed that “Europe should serve its citizens and not vice versa”. A very explicit and brave statement, clearly aimed at his host, accompanied with the usual and ritualistic reference to the trust placed in the “French-German motor” as the flywheel of European integration.

Four months later, in September 2017 at the Sorbonne he painted a picture of the much needed reform leading to a more political and less mechanical governance of the Eurozone (a European Finance Minister with a coordinated budget, a Stabilisation Fund, greater power granted to the European Parliament). In other words, a bold attempt to merge the “Europe of Regulations” (Stability and Growth Pact of 1977, Fiscal Compact of 2012) with anti-cyclical policies, partly through a review of the German “export oriented” policies, and the connected trade surpluses, and support for internal demand.

This request was somehow reiterated in May 2018 at Aachen during the awarding of the Charlemagne Prize. The Sorbonne address, with which the French President set himself up as a champion of smart  and more poignantly dynamic pro-European thinking, targeting populisms alongside ‘accounting’ paralysis, was met by a resounding silence, unfortunately broken by the result of the German federal elections in which the Grosse Koalition lost out and the AfD made a giant leap forward, and the concurrent refusal of the so called “Hanseatic League”, headed by the Netherlands and the Scandinavian countries to consider any changes to the Eurozone.

The transatlantic relations during the Trump era have been the other stage on which the French President’s European leadership has stood out.

His visit to Washington in April 2018, after Trump’s attendance at the Bastille Day celebrations on 14 July 2017, stoked expectations that Paris would manage to hold up Europe’s end while working to reduce the tensions across Atlantic, given the difficulties encountered by Berlin on various sensitive issues, such as its own export surplus, its NATO ‘burden sharing’ and its avowal of the North Stream 2 gas pipeline from Russia.

Unfortunately the various actions implemented by Washington’s, ranging from the refusal to back the climate agreement, its stance on the Iranian accord (including the threat of ‘secondary’ sanctions against Tehran’s trade partners, France being among those with the most to lose) and ultimately the breakdown of the INF treaty (on intermediate nuclear missiles targeting Russian and European cities), have highlighted the limited success of the French initiatives and those of the so called ‘French-German engine’ which is showing signs of wear when dealing with these accelerating geopolitical variables.

The bilateral agreement signed in Aachen on 22 January gave the impression of being little more than a voluntary commemoration of the French agreement signed in 1963, with little hope of providing a platform to mobilise Europe on the many delicate and complex issues on the European agenda. The most poignant of these being a European defence force independent of NATO, which however many European partners (Poland, the Baltic nations, the Netherlands, Italy and Romania) still view very favourably. The readiness of neutral countries such as Sweden and Finland to follow the French leadership, for different yet convergent reasons, is also doubtful. Even Germany, despite its recent displays of intolerance towards American unilateralism, is still a long way from sharing the French interventionist approach adopted in recent years in Libya, Syria, the Sahel and Yemen: the “Great Switzerland syndrome”, rich and uninvolved,  is understandably entrenched in German DNA having learnt its lesson in the 20th century.

In actual fact Macron’s ‘message’ on a European Renaissance of 3 March was met with a mixture of indifference and irony in Berlin and in many other European capitals.

Annegret Kramp-Karrenbauer, who is set to replace Merkel, after warning that European integration ‘depends on conduct and economic results and not politics’, launched an implicit challenge to the French Europeanism by suggesting that Paris’ permanent seat on the UN’s Security Council should become a “European seat”!. Then again, Sigmar Gabriel, the former Social Democrat Vice Chancellor, after praising Macron’s anti-populist message, underlined how the European Union for France is a power ‘multiplier’ and called for a Conference on Cooperation and Security in Europe with the involvement of Russia as a way of solving the Ukrainian crisis.

“The most recent event that confirms Gabriel’s comment was provided in the 3+1 formula adopted for the visit of Xi Jinping. After signing agreements and contracts worth close to 40 billion dollars the day before, Emmanuel Macron then exhibited Angela Merkel and Jean-Claude Juncker as ‘witnesses’ to a strictly European approach to China and the New Silk Road programme.

However, the European Council meeting in Brussels, which took place at the same time, left it up to the various governments to decide whether or not to to implement the Huawei 5G system.

Ultimately, the leadership of the ‘European’ party as the 26 May elections approach has unquestionably increased Macron’s visibility, though the volatility of the French social framework, allied with a political void following the German elections in 2017, have proffered an indication of improvisation and insufficient attempts to seek cohesion with European partners that has undermined the effectiveness of these initiatives.

This is the picture against which one should frame the tensions that have mounted between France and Italy. While the pointed criticism of the Conte government’s migration policies have seemed to be inspired by ‘domestic’ considerations given the close ties between Salvini and Le Pen, Macron’s attitude towards the Fincantieri-STX agreement, reached in Hollande’s day by the Gentiloni government, has provided tangible confirmation that “European industrial champions”, capable of standing their ground against American or Chinese giants are only welcomed by Paris when it’s a French or French-German initiative, as is the case of the Siemens-Alsthom agreement on railways, which in any case has been blocked by the European anti-trust authorities.

Once the current pre-electoral hiatus us over, it will be advisable that in both Paris and Rome they start thinking about the ‘aftermath’ of 26 May. Even the effects on public expenditure required to quell the tensions underlying the incidents that have overwhelmed French public life would suggest the need for a serious joint evaluation of the issues underpinning Eurozone growth, in line with the previously announced reform proposals rightly put forward by the French presidency.

The leading forces in the new Europe 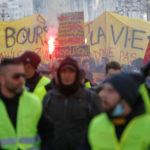 The élite vs the burbs