The Frelimo leadership bet the country on the dream, that the gas bonanza would benefit everyone by 2020. But last week it lost 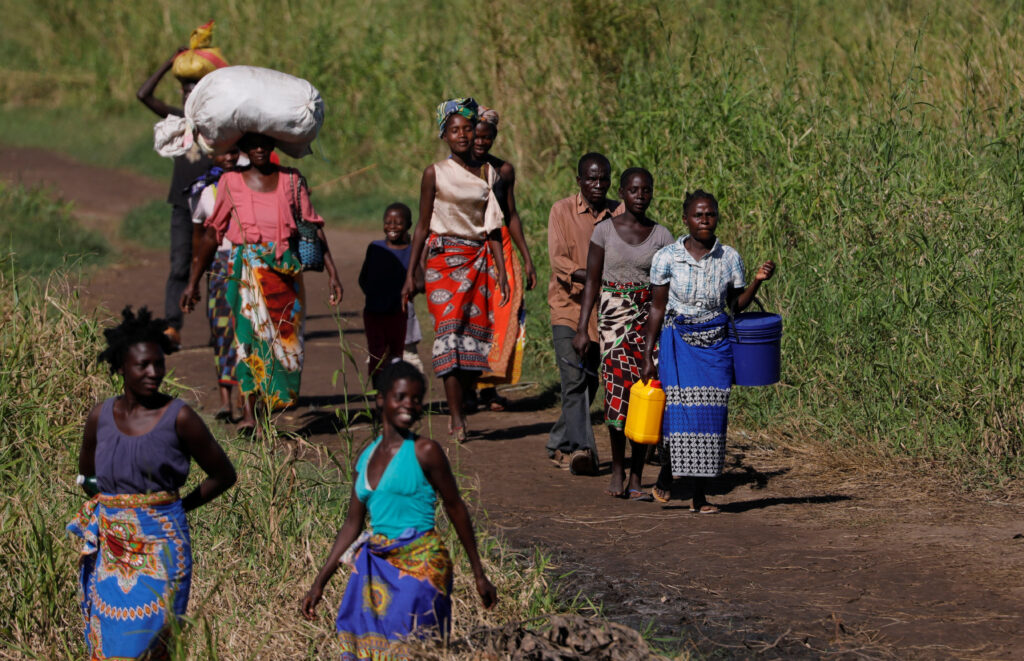 Maria Jofresse, 25, walks with her parents to a camp for the displaced in the aftermath of Cyclone Idai, in John Segredo, near Beira, Mozambique April 3, 2019. Maria Jofresse lost her two children to the storm. In the midst of the floods, she dug their small graves but can’t find them anymore. “People suffered indeed but no one suffered as I did because I lost the most precious things I had – my kids,” she said. REUTERS/Zohra Bensemra

The Frelimo leadership was dazzled by the gas, and believed Mozambique would be like Abu Dhabi, Qatar, or Kuwait. Gas would make the elite fabulously wealthy and also trickle down to ordinary people. Poverty and inequality are increasing, but there was no reason to spend money on rural development because the gas bonanza would end poverty. Of course, the elites could take their share early, as with the $2 bn secret debt in 2012. The gas bonanza would benefit everyone by 2020, delayed to 2025, and then to 2030. The people would believe the dreams.

But in Cabo Delgado they did not, and an insurgency began in 2017 – over growing poverty and inequality, as well as political and economic exclusion. There is very broad agreement that initially al Shabaab was local people with local leadership. There is a huge debate as to whether Islamic State now controls al Shabaab, but even advocates of that view accept that IS took over an existing local insurgency. Local people saw the development of ruby mines and the initial gas development, and realised there were no jobs for them; the gas and ruby money was not trickling down to them.

Three multinational giants control the gas – ENI (Italy) the far offshore section, ExxonMobil (US) the middle section, and Total (France, taking over from Anadarko) the section closest to the coast. ENI was first to start, with a small floating gas liquification platform ordered in 2017 but not yet in operation. Total began serious work on part of its gas production and liquification plant last year.

So work has begun on only a small part of the dreamed of gas bonanza. But in the last two years, the global market picture has changed. Gas is a fossil fuel coming under environmental pressure so predictions of demand 20 years from now are falling, while Russia and Saudi Arabia have upped production to try to capture what is left of the market. Many gas projects across the world have been abandoned. Collapsing markets have already combined with security questions about Cabo Delgado. ExxonMobil has made clear it is unlikely to go ahead; ENI has said nothing about anything more than the initial floating platform.

Insurgents reached the gates of Total on New Year’s eve, and Total pulled out its staff. It said it would not employ a private army for protection. The Total CEO told President Filipe Nyusi personally that Total would only return if Mozambique would guarantee security in a 25 km cordon around the gas project on the Afungi Peninsula.

Last week Nyusi staked his personal prestige and that of the nation on a promise of security. Total agreed to go back to work. Two days later insurgents occupied Palma, within the security cordon, killing contract staff working on the project. Total says work “is obviously now suspended” and will only resume when government really can provide security. It was Nyusi’s last roll of the dice. The whole gas gamble was bet on a promise of security, and Nyusi – and Mozambique – lost the bet.

Will Total return? Not in the short term. It will take perhaps two years for US, Portuguese and other trainers to create a functioning army. Total has other interests in Africa; it has only spent a small part of the $20 bn project cost, and can still walk away. Even if it returns it will demand a much more favourable deal with Mozambique. ExxonMobil has already written off $20 bn of gas assets elsewhere in the world and will not go ahead in Cabo Delgado. It looks increasingly like ENI’s floating platform will be the only gas production in Mozambique.

Mozambique is waking up to the realisation that billions of dollars flowing into the state budget and local pockets was only a dream. Frelimo bet the country on that dream. And last week it lost.

Thanks to Mozambique News Reports and Clippings.