The situation in Myanmar is now near catastrophe. In its fifth week of bloodshed, the Military Regime is unable to calm the protests and the message from China seems like a pass to use force 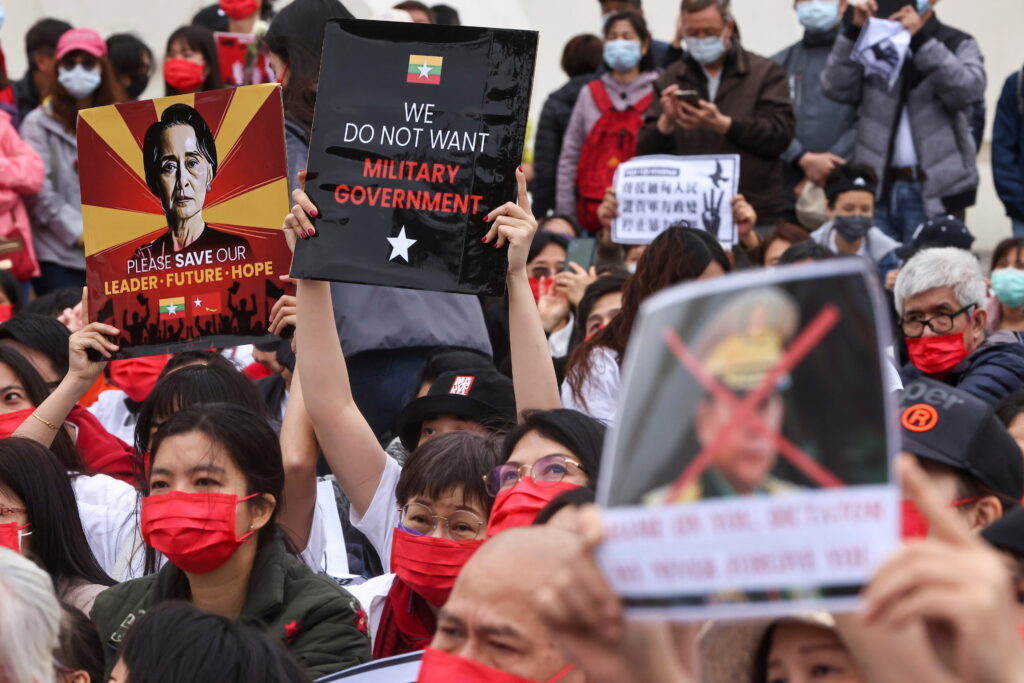 On February 1 2021, Myanmar’s armed forces staged a coup d’état, arresting the country’s leader Aung San Suu Kyi and all the leaders of the National League for Democracy. The party of the Burmese leader last November 2020 had won the elections with an overwhelming majority in Parliament, for a total of 970 seats out of 1170 (approximately 83%). This is no coincidence, considering that in recent years, the party led by Suu Kyi has grown considerably following the 2015 victory.

According to the new Constitution approved in 2008, 25% of the seats belong to the Union Solidarity and Development Party, the party of the armed forces, which until November controlled the fundamental ministries in the administration of the country: Interior, Border Control and Defence. Immediately after the coup d’état, people poured into the streets, protesting harshly against the military regime led by General Hlaing, headed by the armed forces since 2011 and became a strong politician with the democratic transition started in 2012 who, after an attempt to quell the protests, decided to intervene by force.

Read “The heroin epidemic in Myanmar”.

The coup of the military was an attempt to remove Aung San Suu Kyi, who last March 11 was accused on public television of corruption by a real estate developer for receiving a large sum of money, to help the affairs of this person… As the military regime tries to make San Suu Kyi look bad, Myanmar has plunged into chaos between the military’s move to take power and thousands of people taking to the streets in a bid to restore democracy and secure the release of Aung San Suu Kyi and other elected leaders. The security forces have responded to the protests with increased violence, with more than 150 deaths, as reported by the UN High Commissioner for Human Rights. In this chaos, more than two thousand people have been arrested, while hundreds are missing or unaccounted for.

In addition, for more than a month there have been nightly internet blackouts that make it increasingly difficult to organize or share images of protests, while even the non-governmental media have been put under pressure. However, through Signal, a platform similar to WhatsApp, the situation in Myanmar is now very clear on the international stage.

The US and EU have both condemned the golpe. New Secretary of State Antony Blinken called for the immediate release of government officials and leaders of the country, stating that America will always be at the side of the Burmese people. EC President Charles Michel has also weighed in, saying the coup d’état is a serious obstacle to democratic transition, peace and development.

China and Russia have taken a softer approach by saying that this operation is part of the internal developments of the country, but that both will closely monitor the situation. And it is precisely in the last few days, the position of Beijing has changed. The anger of the demonstrators has turned against the people of Chinese origin and against the companies in Beijing, thus jeopardizing Chinese investments in Burma. On 14 March, 30 Chinese factories were set on fire and two people were injured. Chinese Foreign Minister, Lijan Zhao intervened by asking the local military government to protect Beijing’s interests. In addition, Beijing exercised its veto in the UN Security Council not to condemn the coup in Burma, which is seen by many of the demonstrators as an explicit support of the Asian giant to the military.

The violence of recent days and the despair of the demonstrators no longer rule out a civil war, and the international community is called to act decisively to stop the massacre.