Nadezhda Savchenko, why this is her hardest fight

There were no news about lieutenant Nadezhda Savchenko since she was captured by separatist in east Ukraine and imprisoned in Lugansk, until she was taken to court in Voronezh, Russia. She is charged of murder and illegal immigration. According to the Ukrainians she was kidnapped by FSB, while Russians claim she illegally crossed the border fleeing from Ukraine. Still a major indication of Moscow involvement in Donbass civil war. 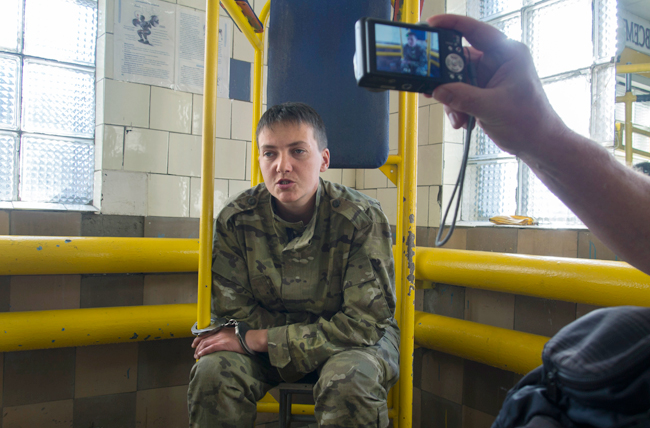 The Russian Investigative Committee, a sort of superpower of attorney directly subordinate to the Kremlin, has released its own version without batting an eyelid: Nadezhda Savchenko entered Russia illegally, seeking refuge from the war in Donbass, and was arrested because found without documents. Once recognized as an Air Force pilot in Kiev, the charge of murder was added to the illegal immigration. She is allegedly responsible of the death of Igor Kornelyuk and Anton Voloshin, two Russian journalists killed by mortar fire on June 17 at Metalist, near Lugansk. At this time Nadezhda is reportedly imprisoned in Voronezh, southern Russia, about 200 kilometers from the border with Ukraine.

Lieutenant Nadezhda Savchenko is the most famous woman pilot of Ukraine, with career of over ten years in the armed forces of Kyiv, first as a paratrooper and later as the Mi-24 gunman. In a video uploaded on YouTube by his own jailers when she was still in Lugansk, she appears proud and fearless while responding to leading questions. Between 2004 and 2005, she took part to the Ukrainian contingent in Iraq. “It was a survival school,” she said in a promotional video produced by Military. “War changes your scale of values.” Nadezhda is now at war again.

The hashtag # SaveOurGirl began to circulate on twitter almost immediately after Nadezhda ended up in the hands of the separatist militia of Lugansk. The circumstances of his capture are confusing. According to the pro-Russians she was captured during a clash with troops of the battalion Aydar, the unit responsible of the mortar shells that killed the two Russian journalists, and involved in fighting in Lugansk. Nadezhda herself, however, gave a different version in an interview given during her imprisonment to a Russian journalist of Komsomolskaya Pravda, Nikolai Varsegov (among the few to have access to all premises controlled by the separatists). She said she was captured while trying to rescue the wounded of a battle near Shchastya, and that she is not there on a mission with her helicopter but only as a volunteer to help out her fellow soldiers.

Nadezhda has remained in the hands of the separatists since June 18, the date of her seizure and upload of the video, and surely she was still there until June 24, the day when Varsegov interviewed her. But then she disappeared without traces. As long as she was taken to court in Voronezh on July 9. Her Russian lawyer said that she has not been presented with her charges. The court adjourned the hearing to August 30, extending the detention of Nadezhda at least until then.

The Battle of Nadezhda

It’s really hard to believe the version of the Russian Prosecutor. Let’s recap. Nadezhda was captured and imprisoned by separatists in Lugansk, in the east Ukraine under the control of pro-Russian. She’s a professional soldier, well known in Ukraine, who fiercely refuses to give information about the contingent of Kiev during the interrogation uploaded to Youtube. In the same interview, while handcuffed to an iron pipe, said she had given oath to Ukraine and that she is fighting against the Russian invaders. According to the version of the Investigative Committee, this soldier would have escaped from the clutches of his captors, and illegally taken shelter in Russia. Nadezhda than, would have been stopped by chance and only after recognized as the responsible for the deaths of the two Russian journalists.

Unless we want to give credence to such an imaginative reconstruction, the story of Nadezhda Savchenko proves that Russia’s involvement in the war in Donbass is more and more an open secret. The contacts between the pro-Russian militia and the Russian authorities are something more than a moral and ideological support and, paradoxically, the recent allegations of separatist leader Pavel Gubarev of having been abandoned by Moscow are the counter-evidence.

Separatists perhaps thought at the beginning to use their hostages as a precious bargaining chip in return of the liberation of prisoners by Kyiv authorities, but now that Nadezhda is in the hands of Moscow are quite different interests at stake, beginning with new sanctions threatened by U.S. and EU. This is certain Nadezhda’s hardest fight.