There is war in Ukraine, the International Red Cross say

While in Kiev the parade for Independence Day strolled along the Khreshatik, separatists in Donetsk made POWs parade between their bayonets and an angry mob. In the same time, the International Committee of the Red Cross leaked the decision to formally upgrade the Ukrainian crisis to "international conflict". This opens the way to the Hague tribunal.

No wonder if the Russian Foreign Minister Sergei Lavrov has not seen anything humiliating in the parade of prisoners of war in Donetsk. "I've seen photos," Lavrov said, "and I found nothing close to an abuse." We too have seen the photos, but we think differently. The Ukrainian prisoners were paraded under the threat of bayonets of the militia. Visibly disoriented and frightened, with long beards, the soldiers had to submit to the public curiosity of an angry crowd that taunted them. The march was followed by three trucks which theatrically washed the road after them. The fact that both the militia and Lavrov consider this a suitable treatment for POWs is just another clue of the distance that keeps Russia separated from the West. Just like the treatment of political opposition, the LGBT community, religions other than Christian Orthodox, ethnic minorities in Crimea, and so on.

The Ukrainian government would have better to change the name of counter-terrorism operation. In fact, qualify separatists as terrorists was a mistake from the beginning of the riots in the south and east of the country, when protesters occupied public buildings just as Maidaners did a few months before in Kiev. At that time, Prime Minister Azarov and President Yanukovych were about to put down the rebellion by launching a counter-terrorism operation.

But it is also a mistake now, and of a different nature. Now that the Donbass unrest is a war between the Ukrainian National Guard and an irregular army fed and composed in large part by the Russians. Terrorism or war is not a trivial difference.

According to sources quoted by Reuters, the International Committee of the Red Cross, ICRC, has raised the level of the crisis in Ukraine "international conflict". To say that there is war in Donbass not like to reinvent the wheel. The ICRC is the watchdog of the Geneva Conventions on the rules of war and its classification of a conflict makes the difference between applicability and non-applicability of the Conventions. If the rumor were to be confirmed, cases such as the downing of the flight MH17 or the shelling of residential areas may be treated as war crimes and pass under the jurisdiction of the International Criminal Court in The Hague. And the parade of prisoners of war in Donetsk too.


I kill your children 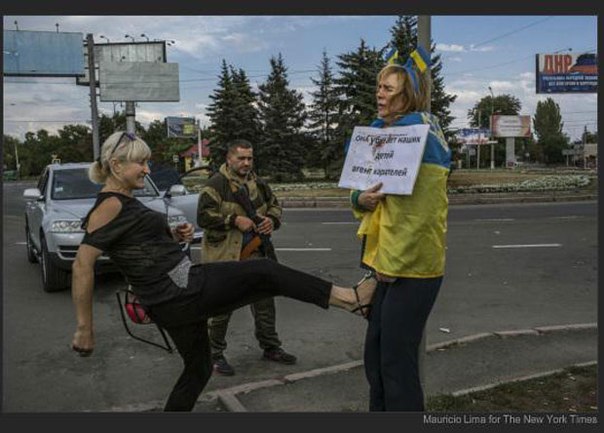 I wonder if Lavrov is also aware of other treatments reserved by separatists to their enemies. Like for example the case of the woman in the photo. According to the military who have abducted and tied to a stake in the Ukrainian town, she is a spy. She is suspected of reporting the enemy separatist’s artillery positions in Donetsk. They wrapped her in a Ukrainian flag and forced her to hold a sign that read, "She kills your children." Then they incited the (few) passersby to vent their anger on her, slapping and kicking her. "For what she did she deserves it all," said a militiaman who pretended to shoot her.

"Russia was a model for us," many eastern Ukrainians told me recently "But after what we saw happen in the territories controlled by separatists, we much prefer remain in Ukraine, even with all its flaws." They spoke in their native language, Russian.

As I wrote, the Ukrainian dilemma is no longer just a matter of language or cultural affiliation, but a choice between a European model of society and values, and Russian one. For which, for example, forcing a prisoner to a mockery is not an abuse.