Medvedev’s watch against everyone’s else

It is long time that Kremlin observers keep an eye on most important wrists of Russia, discovering interesting details. From Putin’s spokesman watch worth $620,000  to Patriarch Kirill’s one for sale at $30,000 to Medvedev’s $6 dollars fake.

Vladimir Putin’s spokesman, Dmitry Peskov, made the headlines a few weeks ago. In a photo of his wedding with ice skater Tatiana Navka, he carelessly showed his wristwatch. The opposition leader Alexey Navalny, also known as an activist and anti-corruption blogger, immediately identified the piece at Peskov’s wrist. It’s a Richard Mille RM 52-01, limited edition of 30 pieces, for sale at $620,000. It is equal to four years of the official (high) salary, and Navalny has publicly asked where he got the money to buy it.

"It is a wedding gift to my wife," said Peskov then to the press. "The watch is indeed very expensive, but it costs far less than some people have said. As to where Tatiana found the money for the watch, that does not concern anyone."

Navalny soon published one more photo (below), shot a couple of months earlier, of Peskov with the same timepiece. He didn’t comment. 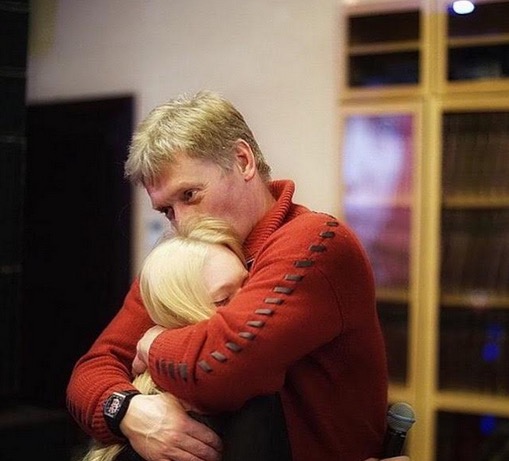 The story reminded me of the hilarious case of Patriarch Kirill watch, from a few years ago. The press service of the "Russian pope" published on the Patriarchate website a photo of a small miracle. During an official meeting, the patriarch was not wearing any clock, but the lacquered table he was sitting at showed the reflection of a $30,000 Breguet. Kirill spokesman said quickly that the photoshopping was a "fool mistake" by a press office young employee. But he did not specify if he was referring to the fact that he forgot to erase the reflection on the table.

What about Putin? The Russian president is not less than his associates. Solidarnost party activists, founded by Boris Nemtsov, have tried to count his watches, but lost count. Certainly, we know that he gifted a child of a first $10,000 Blancpain and  a worker during a visit to a factory of a second Blancpain, taking both off his wrist in front of cameras. Then he throw a third Blancpain into a liquid concrete on hydroelectric plant construction site, as a gesture of good luck. Finally, a fourth one that escaped his compulsive generosity, has been spotted several times at his wrist. But the Tsar’s collection also boasts a $60,000 Patek Philippe and a $500,000 Lange & Sohne.

But disappointment appeared on the face of the observers of Kremlin’s most powerful wrists when, a few days ago, photos of a President’s meeting with Dmitry Medvev were released. During a BBQ after a workout morning at a (private) gym, the former Russian President showed a replica of a plastic Casio, for sale at $6 on Chinese websites.

Medvedev is known, unlike the other top brass, for often wearing digital watches, smartwatch and similar things from considerably lower prices than those of his colleagues. But this time he's outdone himself.

The president the West liked, the man who for four years from 2008 to 2012 made many hope for a turning point in Russian politics, one of Kremlin "presentable faces " speaks the same language of his colleagues to send a different message. Russians, however, seem to be indifferent.