Bread and eggs: Easter for all

For our Easter installment on Soul Kitchen, I've come up with a type of food that crosses geographical, cultural and religious borders and is similarly prepared between Jews, Catholics and Orthodoxes alike: Easter bread with eggs. 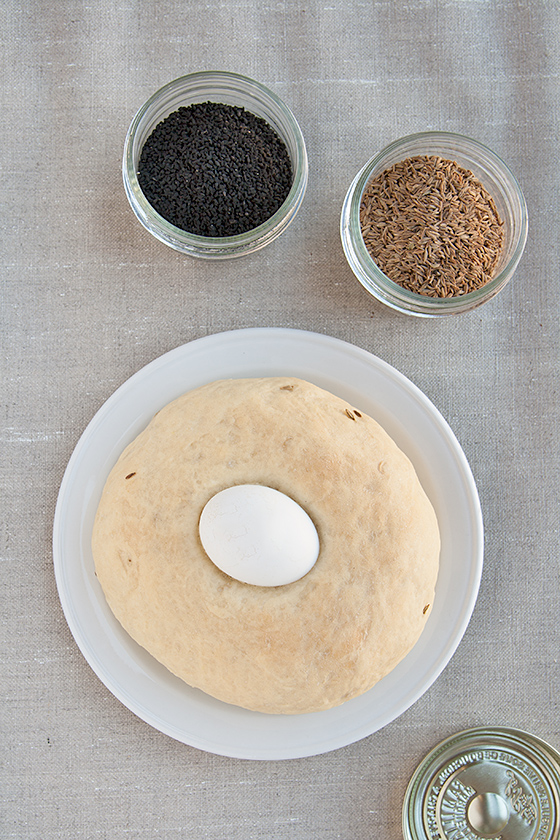 Mimuna is a traditional feast held the day after Passover among North African Jews, both in Italy and abroad: it marks the start of spring and the return to eating leavened bread and bread by-products, forbidden throughout the week of Passover.

The word derives from the Hebrew word for faith, and means happiness in Arabic, but the origin and meaning of the word mimuna is not certain.

The mimuna festivities basically begins with the ceremony of kneading a bread dough, that goes by the same name as the holiday: all the members of the family attend the ceremony and there is a great deal of anticipation for the new bread, after many days of abstinence.
Mimuna bread is a round festive bread that is very special because it has an egg tucked in the centre of the loaf: eggs symbolize the circularity and ciclicity of life, and are supposed to bring good luck.

In Italy, on Easter, breads similar to mimuna are baked in different parts of the country, especially in the South.
During the time right before Easter, Quaresima or Lent, many of the faithful commit to fasting or giving up certain types of luxuries as a form of penitence: most Christians would stop eating meat, cheese, and especially eggs, in order to purify for Easter.

In ancient times, eggs were always forbidden during Lent as well as on other traditional fast days in Western Christianity, and this tradition still continues today among the Eastern Christian Churches.

That's the reason why after Lent people would bake rich, often sweet breads specifically with eggs in them.

In Sicily, for instance, the typical Easter bread is cuddura: a sweet bread shaped like a ring, just like mimuna, with hard boiled eggs in it.

These types of bread are very common in all the countries around the Mediterrean sea: you can find something similar in Puglia, Calabria, Campagna, but if you think of it, the Greek tsoureki, as well, is essentially the same thing.

Eggs are common pretty everywhere during the season of Eastertide: in Christianity, they symbolize the empty tomb of Jesus, but they were a traditional symbol of fertility and rebirth even pre-dating Christian traditions.

Is there any Easter recipe from your background that features bread and eggs?
I'd love to read your stories in the comments!

Pour water and oil in a big bowl and use them to mix yeast and sugar together.
Slowly, but confidently, bring in the flour and the seeds and continue to mix, first with a wooden spoon, then with your hands; when you're halfway, add salt, seeds and raisins.
With a bit of elbow grease, simply push, fold, slap and roll the dough around, over and over, for 4 or 5 minutes until you have a silky and elastic dough.
Flour the top of your dough. Put it in a bowl, cover with cling film, and allow it to prove for about an hour until doubled in size – ideally in a warm, moist, draught-free place.
In the meantime, boil your eggs: you want them hard-boiled, so they won’t crack in the oven.
Once the dough has doubled in size, knock the air out for 30 seconds by bashing it and squashing it.
You can now shape the dough into a ring, place one egg inside each dough ring, then leave it to prove for a second time, for 30 minutes.
Preheat the oven to 180°C/350°F.

Very gently place your breads on to a baking tray covered in parchment paper and into the preheated oven.
Bake the breads for some 20/30 minutes or until cooked and light. You can tell if the bread is cooked by tapping its bottom – if it sounds hollow it’s done, if it doesn’t then pop it back in for a little longer.
Once cooked, place the bread on a rack and allow it to cool for at least 30 minutes.