Most dangerous food in the world

We use to talk about food all the time, there are thousands of recipes on tv, on internet and many are cookbooks published every day in the world. But not everyone mention about some of the most dangerous foods on earth. I'm going to let you know about some of them now.


Let's start with what perhaps is one of the most dangerous food in the world.

The puffer fish or "Fugu".  "Seriously? Puffer fish is so cute, it seems harmless. What evil can do? " Well, few people know that puffer fish is one of the most poisonous fish in the world, so dangerous that chefs who has to handle and cook it, must have a "license" of at least 5 years with which they can prove they have cooked and handled it all this time. If only a small dose of venom, content in fish liver, stomach and ovaries, touched its flesh and is ingested, the person would die in a matter of a few minutes.

The potent venom is called "Tetrodotoxin", 12,000 times more powerful than cyanide. Some people who tasted sashimi made with this fish, have warned a sense of mouth tingling for few minutes. This fish must be eaten only in super recognized and famous restaurants.

Let's move forward a bit, in Iceland. The "Hackarl" are nothing more than strips of  shark fermented and then dried. Maybe you don't know that shark has no kidneys and its body it's full of trimethylamine oxide, a dangerous neurotoxin that is lethal if ingested. Thanks to the treatment that this meat receives, it becomes completely edible and is considered a delicacy both in Iceland and in Greenland. 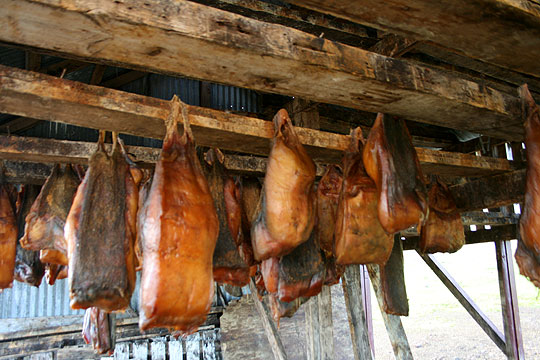 How many of you have eaten food made with rhubarb? I did, many times. I recently  discovered that leaves of this plant are very poisonous. You can't eat it cooked nor raw because they contain "oxalate", a corrosive acid that cause the poisoning of the victim that eats it. Their ingestion in fact causes the individual a very strong malaise that may last for days and, in severe cases, coma.

The Sannakji is a specialty that is "cooking" in South Korea. In truth this dish requires a very quick preparation, because they cut the fish while he's still alive and  the tentacles are then are served on a plate ... while still moving. This  is very dangerous because if the tentacles are not chewed well enough, they may stick to the walls of the throat, with the risk of suffocation. In South Korea, at least a dozen people a year die because of this dish.

The Ackee is a fruit native from Africa, then brought to Jamaica in the 18th century, where he became quickly popular. The fruit is poisonous both unripe and overripe and only a small part is edible. Its black seeds inside are highly toxic and the only edible part is the yellow one.

But without going into Countries so far, now I'm going to show you a small list of some toxic foods that we use to eat normally everyday:

- Beans: very few people know that the beans should never be eaten raw. They are toxic because they contain a toxin, the phytohaemagglutinin, and although the swallowed in small doses can cause illnesses that can last for days.

- Tomasto leaves: this leaves are highly poisonous, infact they contain glycoalkaloids, which causes severe stomach pains and drowsiness. If taken in high doses, it can even be deadly.

- Seeds of peaches: the seeds that remain inside the shell are highly toxic, indeed contain about 90 mg of cyanide. Yes, you got it. Cyanide. So do a lot of careful not to ingest them.