Will the Supreme Court and the judicial powers manage to stymie President Trump’s populist attacks and safeguard democracy in the US?

Two years ago, Donald Trump entered the White House as the 45th President of the United States of America. His election brought about one of the most unexpected pages of recent history and marked the start of a phase of great uncertainty, not just for political life in the US as much as for the stability of the international system of liberal values. Besides the aggressive rhetoric that marks daily life in American politics these days, what is more worrying for experts are the effects of the Trump Administration’s choices on the state of health of the country’s democracy. Our considerations therefore focus on the identity crisis that is pervading American society and the weak spots of the federal institutions charged with safeguarding the integrity of the liberal democratic system.

The democratic crisis in the US has been part of an ongoing discussion that began well before the tycoon decided to launch his candidacy for the primaries in 2015. Trump’s rise is just one of the more striking symptoms of this critical political phase and had been announced on many occasions by the more far-sighted political commentators. Among these, Samuel P. Huntington was writing about a democratic crisis in the US in his famous Trilateral Commission Report in the Seventies and then followed this up in the book American Politics: The Promise of Disharmony. In this latter research published in 1981, far too soon to be fully appreciated by his contemporaries, he spoke of an identity crises that resurfaces on a cyclical basis within American society, when citizens are divided and call in to question national beliefs, meaning the political ideals enshrined in the constitution, which are the only true points of reference in United States history.

The dangers at these times are extreme seeing as the American community can risk sacrificing the very ideals that underpin its institutions, whenever politics becomes polarised to such an extent that it can mislay its ability to accept compromise. Huntington calls these phases Creedal Passion Periods, and they come about periodically every fifty years, from the time of the War of Independence to the civil rights battles led by Martin Luther King. According to Huntington, the next critical period was expected to come right at the end of this decade.

If the US is actually embroiled in one of these identity crises, the last hope for their democracy are the institutions that have been put in place to safeguard their constitution. In this historical situation, with the blue wave not managing to completely tip the political balance in Congress and the Republicans retaining control over the Senate, the weakness of the political opposition has become very clear. The reason is simple, the Democrats can’t stop any of Trump’s most important nominations because the selection of those holding the top 1200 positions in the judicial system, the federal agencies and the independent institutions is in the hands of the President, who appoints them, and the Senate who can ratify the appointment or not.

As things stand, the Supreme Court has become the keystone of democracy, although it is not immune to threats on its independence. Relations between Trump and the justice system have not been ideal ever since the start of 2017. Two years ago the main risk was the President’s repeated attacks on the courts, in the attempt to compromise their credibility and independence. The most outrageous instances where those involving the dismissal of the head of the FBI James Comey and of the New York prosecutor Preet Bharara. Today, the greatest fear is no longer the full frontal or media attacks on the courts, but the appointment of new judges. Many fear that these independent institutions are being weakened and shall not be strong enough to limit Trumpism in power. The litmus test of the risk that American institutions are currently having to weather is the absence of dialogue and the mutual face-offs in the recent appointments of members of the Supreme Court. After Trump’s arrival these appointments have given rise to political clashes and instances of prevarication, as if the practice of bipartisan selection and choice had been abolished. This is a very telling warning sign.

One has to ask oneself whether the Supreme Court is in a position to protect democracy seeing that Trump has already managed to appoint two members and that a majority of the Court’s members has now been appointed by Republican Presidents. What is more worrying is the risk that Trump may be able to appoint another member of the court before the end of 2020.

After Judge Anthony Kennedy decided to leave his post at the age of 81 last summer, there are two possibilities that Trump will once again have the opportunity of exercising his power of appointment. The factors at play are unpredictable, but there is one significant figure: before Kennedy, the other 11 judges who have left the Court have done so on average on reaching the age of 80 and the judges appointed by President Clinton have already crossed this threshold: there are rumours that Stephen Breyer and Ruth Bader Ginsburg could follow Kennedy and his predecessor’s example, leaving one or more Court positions vacant. What is striking here is that the Democrats will not be able to stop Trump seeing as the voting procedure no longer requires a qualified majority ever since the Republicans activated the so called nuclear option to successfully approve the appointment of Judge Neil Gorsuch.

Besides the issue of the new appointments, the Court enjoys a broad level of independence. Its members have no reason to support the President or the majority’s decisions seeing as they are appointed for life and cannot apply for any higher post in American institutions. In this way the founding fathers meant to guarantee the Supreme Court’s independence as much as possible. Nevertheless, no system is completely fool-proof. The Court can be marginalised or its decisions be left unheeded. For example, in some cases the President can influence, delay or block the implementation of the Court’s decisions. If this were to happen, a degeneration of the balance of power could even undermine what James Maddison referred to as the “auxiliary precautions”, meaning the (written and unwritten) provisions that regulate the operation of the system of checks and balances contained in the constitution. Probably, if its operation were threatened, the Court would not let itself be easily overrun and would defend its prerogative without backing down in any clash with the White House. One detail over all the rest provides a glimmer of hope: according to analyses by Jeff Yates and Andrew Whitford, the President’s level of appreciation can influence the Court’s decisions. In other words, it is more likely that the Court will stand against the administration if the President’s approval levels are low. This means that the current Supreme Court could firmly oppose Trump’s decisions given his low level of estimation among the population. This leaves room for hope.

There is ultimately also the risk that the Court’s credibility be further undermined. Thought its judges are independent, they are not unknown to make choices that may be explicitly in line with conservative or liberal-reformist thinking. In this regard, the Court can tip the balance in many debates that have split public opinion, leaving rifts open on issues such as the rights of the LGBT community or abortion that are sometimes irreconcilable. If the Court should favour a conservative interpretation on these issues, the resulting unpopularity could end up damaging the last of the great federal institutions, with American democracy then left tottering on the brink, with unforeseeable repercussions. 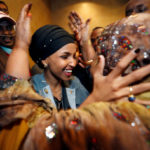