Putin, Medvedchuk and the remote control on Ukraine

At the time of one of his last visits in Ukraine, in 2013, Vladimir Putin dismissed in the space of a couple of hours then President Viktor Yanukovych and ran to Crimea to spend evening with the father of her goddaughter.

Viktor Medvedchuk welcomed the godfather of his daughter in a luxurious villa on the beach. Not surprisingly, today Putin chose him as a peace envoy of Russia to deal with Kiev on the separatist issue. 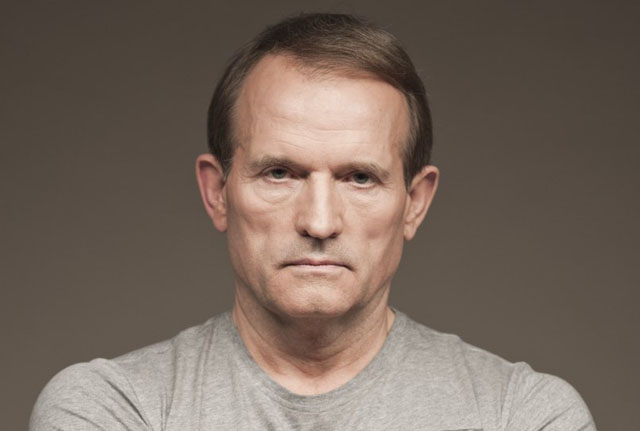 Medvedchuk has always been one of the most powerful men in Ukraine and the fact that Putin is his daughter’s godfather is not the only link with the Kremlin. He was a member and speaker of parliament and head of the presidential administration at the time of Leonid Kuchma, second President of Ukraine and Moscow-backed man in Kiev. Nevertheless, he began to exercise his real power when he retired from public life, sponsoring the rise of Yanukovych and founding the pro-Russian organization “Ukrainian Choice”, Trojan horse of Moscow in Kiev. During Euromaidan, Medvedchuk came out of the shadows to take strong positions against the demonstrations and in favor of entry into the Customs Union with Russia. The group Automaidan – famous for its parades of honking cars – took aim at one of his residences in Kiev, considering him the instigator of December and January repression. “If you want war, you get war,” seems to have said Medvedchuk. The organizer of Automaidan, Dmytro Bulatov, was later kidnapped and tortured for eight days by men with Russian accent, as he could tell after fleeing to Lithuania. Medvedchuk was then enrolled in the list of U.S. sanctions.

The choice of Medvedchuk – actually made along with Angela Merkel – is not a surprise itself and says a lot about Russian intentions about the separatist issue in Ukraine. The oligarch who most opposed the signing of the Association Agreement with the EU, who has opposed from the first hour Euromaidan, who would bring Ukraine in the Eurasian Union and who is even blacklisted by the U.S., is now called to mediate between Kiev and separatist leaders. Definitely not the most conciliatory man. But perfectly in line with the Russian action in the Donbass in recent weeks.

The risk of a Russian invasion of Ukraine seems now dispelled, after Putin requested the upper house of parliament to revoke the authorization for the use of the army, and after the (partial) withdrawal of troops from the border. But Russian action for the control of Donbass is in full progress. It is no longer only matter of logistics and supply of weapons to the separatists – what military experts call “hybrid war” – nor the infowarfor brainwashing the Russian-speaking population. Putin is putting his men at the command of the self-proclaimed republics of Donetsk and Lugansk.

On May 29, the (pro-)Russian and Chechen militia unit “Vostok Batalion” surrounded the palace of the regional government of Donetsk, decapitating the self-proclaimed authorities who occupied it. New men began to appear at the top of the separatist republics, gradually replacing the first-time rebels. The “prime minister” Aleksander Borodai, the “defense minister” Igor Girkin – known as Strelkov, according to many a former agent of the service Russian military intelligence – and the Cossack Aleksander Mozhaev are all Russian citizens. In mid-June, finally, Strelkov arrested the self-proclaimed people’s mayor of Slovjansk, Vjacheslav Ponomarev, one of the most prominent people’s leaders in the Donbass. Eventually, the appointment of the faithful Medvedchuk.

Moscow was losing control of the rebellion leaders and could not let it happen. The first generation separatists began to operate as mavericks: they firstly ignored Putin’s call to postpone the referendum, then demanded more and more loudly Russian military intervention and, above all, they were losing sight of the military goal and proving they were conducting an amateurish guerrilla. With them at command places, Kiev’s anti-terror operation would have a quick epilogue.

Now that the Kremlin has put all the right people at the right places, it seems to have what it needs to continue its remote-controlled war. Without risking of bogging down in to an open conflict and continuing to make a constant pressure on Kiev and its Western allies. Meanwhile Medvedchuk began to mark tightly Poroshenko. “The end of the ceasefire in the Donbass is a strategic mistake for Ukraine,” he wrote on his Facebook page.