Britain’s Queen Elizabeth II arrives for a visit at Royal British Legion Industries village in Aylesford, Britain, November 6, 2019. REUTERS/Hannah McKay Johnson’s advice was illegal but the Queen still approved it. The Scots are asking her to resign while English constitutionalists stand up for her

When Brenda Hale, President of the Supreme Court of the United Kingdom, appeared in front of the cameras on the morning of the 24 September 2019 to announce one of the most important decisions in British constitutional history those who know her best already realized what the court had decided. Indeed, the Baroness of Richmond – a lover of decorative jewelry – was wearing a large spider-shaped brooch: not exactly the best of omens for Boris Johnson.

With a calm tone of voice similar to that of the actress Angela Lansbury – She Wrote Murder – Lady Hale explained why the Supreme Court, with a unanimous decision, believed the advice given to Queen Elizabeth II at Balmoral Castle on 28 August was «unlawful, void and of no effect». One can only speculate as to the reaction of the Queen, but that she «was not amused» is probably a gross understatement. Like anyone the Queen certainly does not like to be misled or, to be more explicit, lied to. However, many commentators have posed the question of whether, in actual fact, the Queen should have refused to prorogue Parliament because it was evident what Johnson was trying to do i.e. sidestep so as to obtain a no-deal Brexit. Now while from a strictly legal perspective it should be stressed that Elizabeth II did no wrong because the origins of the unlawfulness are to be found in the advice given to the Queen by Johnson, politically, some could argue that the Sovereign is in a very uncomfortable position indeed.

As might have been expected the anti-monarchists have come out in flocks claiming that the Queen should go. Graham Smith, spokesman of the anti-Monarchy group Republic, argues that the Queen’s decision to approve prorogation was unconstitutional and that she cannot defend herself by saying she did what she was told to because, he argued, she is responsible to act as a check and balance, while Andy Wightman, member of the Scottish Greens, tweeted that: «It is clear that Prime Minister (in advising, Royal Commissioners in implementing) and Queen (in ordering) all acted unlawfully. All should resign». A legitimate statement though one should remind Wightman that monarchs don’t resign they abdicate…

The writer Anthony Barnett has stated that the constitutional convention that the Queen is above politics has led her to her historic humiliation. He questions the relevance of her role, describing it as «redundant», «useless crown» or «the hollow heart of the unwritten British constitution». He argues that if she had been a president or if the constitution was written, she could have argued that Boris Johnson’s motives were incorrect and she could have refused to approve prorogation. The Scottish columnist Joyce McMillan also argues that the Queen’s decisions are usually based on past custom and practice. As it was unusual to prorogate for such a period of time, she should have refused. As things stand she is helping Boris Johnson in «undermining institutions» and Brexit only shows that her stabilizing role is eroding.

Other commentators, however, such as Catherine Haddon, from the Institute for Government, have underlined that all of this has actually reinforced the importance of keeping the Queen out of politics and Philippe Sands, professor of law at University College London, has claimed that the Queen was protected by the decision of the Supreme Court and that her public image is intact.

One should remember that after the Queen ordered Parliament to be prorogued, Jeremy Corbyn, the leader of the Labour Party, and Jo Swinson, the leader of the Liberal Democrats demanded an urgent meeting with the Queen. However, after consulting with her advisors, she refused to see them and indeed the constitutional expert Bob Morris believes that if the Queen had agreed, she would have acted against the prime minister and would have been in a much more difficult position.

One may be a Republican or a Monarchist, but the truth of the matter is that expecting that the Queen would have stopped the prorogation is to misunderstand her constitutional role. The Queen cannot choose between advisers. She has to accept the advice given by the government, who is itself responsible to Parliament. From a strictly constitutional perspective – and that is what matters – the Queen could not have refused to prorogue Parliament because that would have meant interfering in political matters. One should not forget that, unlike for example the President of the Republic in Italy, according to British constitutional law the Queen has very limited powers. For example while the Italian Head of State can refuse to sign a law and send it back to Parliament if s/he believes the law is breaching the Constitution, the Queen can do nothing of the sort. Indeed if she were to refuse to sign a law approved by Parliament she would be overthrowing the Constitution.

There is a constitutional convention according to which a monarch cannot refuse royal assent to a law approved by Parliament and indeed the last monarch to withhold royal assent was Queen Anne back in 1708. Again, unlike her Italian counterpart, the Queen has no discretionary powers when it comes to appointing the prime minister. In fact, according to another constitutional convention the Queen is obliged to choose the leader of the party that has the majority in Parliament. If a government does fall, again unlike the Italian President, she will not start conducting talks with the various political parties or anything of that nature. She will patiently wait until the leader of the party with the most votes informs her that an agreement has been reached and that s/he is able to form a government: at that point the Queen will appoint that very person prime minister.

From a political perspective the problem today is that for the first time in British history the Queen cannot trust the prime minister who clearly misled her and judging by the expression she had on 14 October, while delivering her speech after the opening of Parliament, she appeared to be immensely displeased. Former conservative prime minister Sir John Major has commented that «no prime minister must ever treat the monarch or Parliament in this way again». Former Attorney General Dominic Grieve has gone as far as to say that he believes that the Queen could sack Boris Johnson, if he refused to seek an extension to Article 50 process and attempted to push through a no-deal exit without the approval of the Parliament. The Financial Time considers that possible today but «it would be an exceptional constitutional act in modern times». On the contrary for Robert Hazell, professor of government and constitution, at UCL, the Queen could only dismiss him if he lost a vote of no confidence and refused to resign and if the House of Commons indicated clearly who should be appointed as prime minister. Again from a strictly constitutional perspective Hazell is right.

Finally one should point out that there is another very strong argument – both political and legal – with which one should applaud the fact that Elizabeth II did not refuse to prorogue and that is that it allowed the appropriate constitutional body, the UK Supreme Court – created exactly a decade ago, to affirm its role as the guardian of the British Constitution and parliamentary sovereignty. This is an extremely positive constitutional development that would not have occurred if the Queen had interfered.

In a nutshell, it goes without saying that arguing in favour of abolishing the Monarchy is perfectly legitimate, but accusing the Queen of violating the Constitution because she did not stop Boris Johnson’s unlawful prorogation of Parliament is simply untenable. 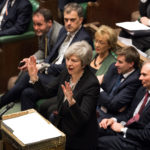