Salome Zurabishvili is the first woman president of the former Soviet Republic. The ex-diplomat with a French accent is set on making her country part of the EU

In Tbilisi, in Europe Square, the Georgian and European Union banners flutter in the wind side by side, forming a sparkling circle in which the EU blue merges with the white and red, the colours traditionally associated with Georgia. In these parts, when one suggests that Georgia could possibly become a member of the European Union, the locals smile to themselves, as if this was some kind of lightweight banter, a ridiculous concept to be discussed at length in one of the capital’s countless wine bars, in front of a glass of excellent Georgian wine.

Someone who loves to speak about Europe is Salomè Zurabishvili, a former diplomat born in France who in recent months, after a tense and controversial electoral campaign, was elected President of Georgia, becoming the first woman to hold such a post in the history of the former Soviet republic. In the hours that immediately followed her election, Zurabishvili stated that Georgia “has decided in favour of Europe”, and announced her readiness to pursue the goal of EU (and NATO) membership with the support of a few strategic partners, including the United States. The 67 year old will remain in power until 2024, and her successor, after the constitutional reform of 2017, will be selected by an electoral college comprised of 300 members.

The Zurabishvili family fled Georgia in 1921, when the country fell into the hands of the Bolsheviks. Her parents gave birth to a baby girl many years later in Paris, in 1952. Salomé Zurabishvili therefore found herself in the ideal position to study international relations at a prestigious institute in the capital and make a very good name for herself in French diplomatic circles. After fruitful work experiences in the United States and Chad, in 2003 Zurabishvili was appointed French ambassador to Tbilisi, in Georgia, where she was subsequently given the position of foreign minister by former President Mikheil Saakashvili.

Although she speaks Georgian with a strong French accent, the new president will nevertheless have to try and earn the trust of the 4 million individuals who currently make up today’s Georgian society, having overcome the initial diffidence she had met when she first moved back to her country of origin. During the course of her mandate, the former 67 year old diplomat will try to follow the example of her colleague Vaira Vike-Freiberga, the former president of Latvia (who also grew up abroad), who successfully managed to ferry her country towards NATO and European Union membership.

Last November, Salomè Zurabishvili achieved what can only be described as an overwhelming triumph: the former diplomat won the Georgian presidential elections with 59.52% of the vote, outstripping her main rival, Grigol Vashadze, by a huge margin. His ballots on accounted for 40.48% of the vote. The opposition parties immediately questioned the ballot count, claiming it was tainted by irregularities and called for the parliamentary elections scheduled for 2020 to be brought forward. Salomè Zurabishvili was elected with the backing of the Georgian Dream party, founded by the country’s richest man, Bidzina Ivanishvili, who many believe to be the true puppet master of Georgian politics. Aside from the controversies, it has to be said that Zurabishvili’s intention of propelling Georgia into Europe was apparent from the outset, and was confirmed by her subsequent statements.

The new president’s European ambitions could however meet considerable resistance with regard to the issues related to Abkhazia and Southern Ossetia, two separatist regions which still have Russian troops on their territories, and with which Georgia has broken off diplomatic relations for some time now. The two regions are internationally recognised as an integral part of Georgia, but Russia, after the short conflict with Tbilisi in 2008, has recognised their independence along with very few other states. Since the war Russia has maintained an occupation force on the ground in both regions. According to President Zurabishvili, at the moment the conditions are not ripe to restore relations with Moscow, and the situation looks likely to stay that way for quite some time yet.

Located at a crossroads between east and west, in the heart of the Caucasus, Georgia obtained its independence from Russia in 1991, but Moscow’s influence over Georgian affairs persists, even many years later. One of the most important aspects of political dialectics in Georgia, revolves around the capacity of the individual parties to ward off the pressure (whether real or perceived) exerted by Russia.

All else aside, relations between Georgia and the European Union are already in pretty good shape. The EU is Tbilisi’s main trade partner and over the course of the years there have been significant steps forward made on issues such as economic integration and financial assistance. In spite of the improved relations and Zurabishvili’s best intentions, the path that leads to Georgia’s full integration in the European Union is still likely to be a very long and windy one.

“The emphasis placed by Zurabishvili on the fact that Georgia has chosen to align with Europe has sent a very clear message”, Eastwest was told by a European Union spokesperson; “This has been further confirmed by Zurabishvili’s decision to make her first official visit abroad to the European Union. We are very much in favour of this commitment to improve the political association and economic integration between the EU and Georgia and can’t wait to cooperate further with President Zurabishvili”.

One area in which Salomè Zurabashvili certainly made her mark during the first weeks after her election was her uncompromising approach to the Russian Federation, especially with regard to the vexed question of Abkhazia and Southern Ossetia. This was partly aided by the backing of the European Parliament, which in June 2018 approved a resolution that called on Russia to review its decision to recognise the independence of the two regions. The new president has addressed the issue of Russian occupation on a number of occasions, and has gone so far as to term it “unacceptable” and direct harsh criticism at Moscow’s attitude in the area.

The fact that the European institutions seem well-disposed towards Georgia, even on such a delicate matter as territorial integrity, is undoubtedly a positive sign, especially when we consider Tbilisi’s ambition to open its doors to the west. The lack of actual solutions to the issue could however hinder Tbilisi’s rapprochement with the EU, especially if no significant steps forward are taken in the medium term.

“Membership of the European Union is one of the Georgian government’s top priorities, we are told by Alex Melikishvili, principal research analyst with the advisory firm IHS Markit; “It’s an objective that is still way off, and certainly Tbilisi is aware that right now the EU has many more pressing issues to deal with. However, the EU is still very popular among Georgians, as the latest polls have shown, including the one taken in June 2018. It turned out that the EU is even more popular that NATO”.

The dossier on Georgia’s membership of the EU is certainly complex, but a figure of the standing of Salomè Zurabishvili, with her extensive diplomatic experience and her wide-ranging international contacts, seems at least the best person to handle it, probably better than anyone else. Her entire mandate will in any case be judged on the results she brings home in foreign policy, an issue on which Zurabishvili has based most of her political communication. 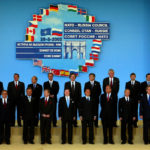 Europe in the crossfire