Six Reasons why war in Ukraine is better than the truce

It is almost three weeks that there is a ceasefire in the Donbass, but shelling on the cities continues and people still die. Mass media seem to look away more than ever, while the political parties are vociferous about a non-existent peace. In the meanwhile, the inhabitants of the cities under control of separatist are waiting to know their fate in an exhausting uncertain mood. 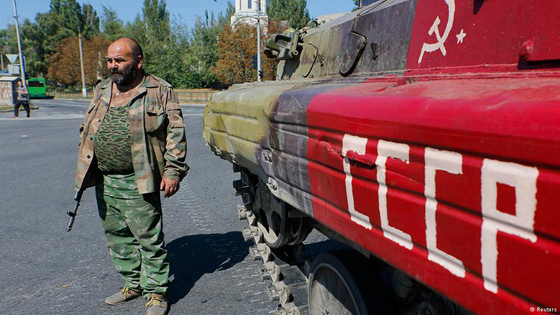 “We will be a new Transnistria,” a resident of Donetsk told me few days ago. He wanted to say that the ongoing truce, which seems to hold, is likely to transform the Donbass in a new frozen conflict. As we talked on Skype, we had to truncate abruptly communication. “Damn, I heard two shots right near here,” he said. “I’d better go down to the shelter.”

In the weeks since the beginning of the ceasefire between the Ukrainian army and the separatist’s militia, attacks from both sides were repeated, albeit at a slower pace. Between ten and twenty people died. According to many, it makes no sense to talk of truce, while according to others, the declaration of a cease-fire is equivalent to a surrender of Kiev. Here are six reasons why freezing the current situation in Donbass may prove to be a mistake.

1. The decision to stop the fighting to support a peace plan comes at a critical moment of the war. Government troops and paramilitary battalions loyal to Kiev were enjoying success after another and were already on the outskirts of Donetsk and Lugansk. Their advance seemed unstoppable and, according to government sources, the liberation of the entire east was expected by the Independence Day of Ukraine on August 24. Just when the goal seemed within reach, a new front in the south – near the port of Mariupol, on the coast of the Sea of ​​Azov – opened, giving the rebels a new and large chunk of territory. The truce is now freezing a situation much more favorable to the rebels, with over 300 kilometers of border with Russia out of government control.

2. The separatist’s counter offensive in the southeast has been possible thanks to a substantial help from Russia. Although it is difficult to say how many Russian troops have entered into Ukraine and which and how many weapons they have given to the separatists, the direct involvement of Moscow in the conflict is now an open secret. Europe and the United States have launched the third level of selective sanctions against Russia that, despite what is believed by many, are having some effects. The permeability of such a long strip of border, together with the truce, allows rebels to strengthen their positions with Russian help under the banner of peace, making sanctions fourth level unlikely to come.

3. Freezing the current situation is equivalent to a defeat of Kiev. It is true, as claimed by those who favor the truce, that there is a huge disproportion between the Ukrainian army and the Russian war machine. Nevertheless, the Russian involvement could be uncovered only fighting. The withdrawal of Russian troops in recent days, instead of a victory, proves they accomplished their mission. The “maskirovka” operation of the past few weeks obtained its goal: to grab a large slice of strategic territory (the coast of the Sea of ​​Azov is the direct overland link with the occupied Crimea) without openly invade Ukraine.

4. The ceasefire is strongly backed by President Poroshenko. It is a crucial step to a lasting peace. What is almost a unilateral ceasefire, currently ties the hands of Ukrainian army. According to the OSCE report, the majority of clashes are due to militia attacks towards Ukrainian troops, which just take their lumps not to blow up the truce. In addition, while the Ukrainians withdrew from positions advanced, the separatists have been able to strengthen their positions, perhaps irreparably undermining the military efforts of the past few weeks.

5. According to United Nations, the war death toll reached 2,200, but the UN itself says that it is a very conservative figure. This is definitely a reason to stop the conflict. Nevertheless, if five-month war against separatists only served to lose most of the Donbass, all these people will have died in vain.

6. Just while ratifying the Association Agreement with the European Union, the Rada also passed a special law. The law “On special procedure of local self-governing in some districts of Donetsk and Luhansk regions.”, along with the truce, is another key step in the Poroshenko’s peace plan set by the trilateral contact group in Minsk. It provides for a transitional period of three years for the creation of local government, through elections to be held after the complete pacification of the territory. In ten points, the law sets the stage for a subsequent definition of details by the Rada itself, starting with their exact identification of the territory included in “some areas of the regions of Donetsk and Lugansk.” The more the separatists hold the gained ground, many more towns and villages will fall under the “areas” of the law. Given the repeated reference to “local government authorities,” the peace process is likely to involve the leaders of the Donetskaja and Luganskaja Respublika, also considering the amnesty that the law guarantees them. Beyond the good intentions of the law, the inevitable approximation of the terms and procedures provides an opportunity for Russia and the separatists to keep the conflict frozen. The Donbass could really become another Transnistria.