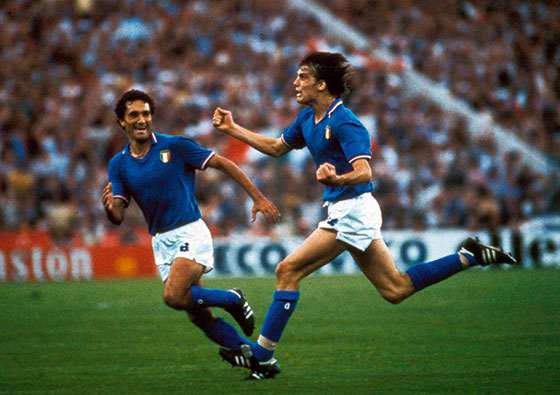 The starting whistle: on 12 June 2014, just as Brazil was kicking off the Football World Cup against Croatia in the Sao Paolo stadium, three Israeli youngsters disappeared from Gush Etzion, an Israeli settlement near Hebron, on the West Bank. The Brazilians scored three goals to clinch a victory that kindled the country’s trophy hopes, while the latest Israel-Palestine conflict was erupting almost 7,000 miles [11,000 km] away.

Two players, Mesut Özil, the Turkish born midfielder playing for Germany under Joachim Loew, and Islam Slimani, a striker in the Algerian team that did Africa proud in Brazil, ended up being entangled in the two top news stories in the summer of 2014. Both Muslims, they had to deal with the start of Ramadan and the usual onslaught of propaganda. News travels fast between the web and the press: Özil and Slimani (along with all his fellow players) were going to donate their FIFA prize money to the population of Gaza. The news quickly spread through the Gaza Strip and went viral on the internet.

Özil, a star of the German team and the UK club Arsenal, had apparently pledged 600 thousand dollars to the Palestinian cause. But had he? Angela Merkel had lifted the World Cup to the heavens and Özil was already on holiday when his agent told the AP news agency: “The claim that Mezut donated money to Gaza is not true. Maybe in the future, who knows?” he added ambiguously.

Mesut then explained on his Facebook page: his world cup bonus would be used to provide surgery for 23 sick Brazilian children. His personal thank-you “for the hospitality of the people of Brazil.” Videos and photos testified his philanthropic gesture. No sign of Gaza.

But there’s a precedent, from two years back, involving a Palestinian boy killed wearing a Real Madrid number 23 jersey, the number worn by Özil when he played in Spain. The tragic image was soon all over the web, followed by a tweet –#Free Gaza – ostensibly sent by the German international star. But it was not from his official account. It was another fake.

Another mischievous tweet reported that the Algerian national side would donate its second round prize money – 9 million dollars (€7.1 M) –to Palestinian children. In Porto Alegre on 30 June, Germany beat the ‘Desert Foxes’ 2 – 1 in extra time. Algeria’s Brazilian adventure ended at this knockout stage, though the team had done themselves proud.

Two days later, the news went viral, thanks to Jordanian sports writer Abu Nada: Islam Slimani had apparently announced he was pledging his entire world cup bonus to the children of Gaza. “They need it more than us,” the footballer allegedly commented.

The first mention in print appeared in the Dutch daily Algemeen Dagblad, with British papersThe Independent and Daily Mail close behind. The Algerian daily El Khabar referred to it briefly without quoting sources.

Mohamed Raouraoua, the President of the Algerian Football Federation (FAF) and member of the FIFA executive committee said nothing. Indeed, the head of football’s ruling body, Sepp Blatter, had been very clear about this: no politics in stadiums. In fact, Argentina had recently been fined over a banner displayed by its players during a friendly against Slovenia. It referred to the old dispute with Britain over the Falkland/ Malvinas islands. So Raouraoua had no intention of breaking FIFA’s rules.

The buzz was eventually silenced by the magazine France Football (which assigns the European Footballer of the Year prize), in an article by journalist Nabil Djellit, an expert on Maghrebi football. “They will not be donating their prize money to Gaza as has been claimed on the web and on certain TV stations. The words of the Algerians were distorted.” A view echoed by Al Jazeera reporter Mezahi Maher, “Twitter rumour gone mad.”

But in Gaza they still believe it. And it’s not the first time. In 1982, when Italy won the World Cup, everyone in Gaza was convinced Gli Azzurri – the Italian national team – had dedicated the trophy to the Palestinians. No one officially denied it and the myth of Marco Tardelli and Paolo Rossi has continued to grow among the Gazan population.

The Algerian team led by Bosnian coach, Vahid Halilhodžić, returned home to a hero’s welcome. They paraded through the capital’s streets on a bus, and amid the chanting and smoke bombs, a Palestinian flag. Impossible not to spot. But no official comment was made about the alleged donation to Gaza. With the post-World Cup celebrations still in full swing, more trouble was brewing, once again on the web. It began with a Facebook petition to persuade the man behind Algeria’s historic achievement to stay on as coach. It became a matter of state and the Algerian President Abdelaziz Bouteflika stepped in and officially asked Halilhodžić to renew his contract. The coach was grateful, but stalled.

In the meantime, the war in Palestine was continuing with no truce in sight. On 19 July the Fédération Algérienne de Football issued an official statement that put a stop to all web speculation: “The national team players and FAF will be donating 10 million dinars (80,000 euro) to the children of Gaza and express their support and solidarity towards them.”

What about the coach? It didn’t work out and he left the team. “The Federal Bureau (have) decided to appoint Mr Christian Gourcuff as national coach,” read the FAF statement. Final whistle, end of story. Almost. Ten days later Algerian President Bouteflika pledged an aid package of 25 million dollars (€ 20M) to Palestine.