Somalia: Ethiopia is back

Old enemies come with a gift of peace–perhaps. 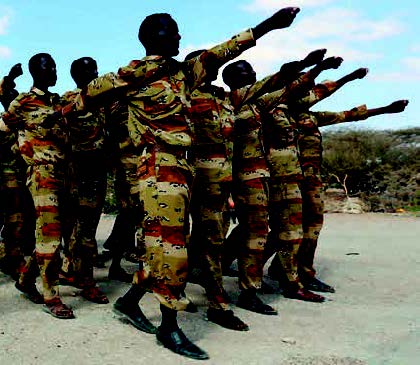 Historic and religious differences, economic and political interests: that’s the baggage Christian Ethiopian soldiers entering neighbouring Somalia as “peacekeepers” will bring with them in coming months. The ultimate impact these variables is unfathomable.

“The foreign invasion aims to divide up what Somalia between Kenya and Ethiopia. Ethiopia will be defeated, as has happened in the past and the Muslims will win”, blustered Ahmed Godane, head of the Somali anti-government movement, Al-Shabab, believed by some to be a Somali-based cell of Al-Qaeda. He has called for all Somalis to join a holy war of resistance against the ‘invading’ Ethiopians. As of January 22 this year a contingent of 4,395 Ethiopian soldiers has joined the peacekeeping force run by the African Union Mission to Somalia (AMISOM), and this news was soon turned into a propaganda tool by Godane and his Shabab militants, currently being forced to fall back by the advance of the international troops.

This development had been widely predicted by analysts and those acquainted with the Somali mess, who labelled the decision “a mistake”, according to former American ambassador to Ethiopia, David Shinn. Commenting on the news on Voice of America, Shinn, a professor at the Elliott School of International Affairs of the George Washington University, explained that al-Shabab could use the Ethiopian move as a “rallying cry” to recruit new members.

Faisal Roble, the director of research at the US-based Institute for Horn of Africa Studies and Affairs, said the inclusion of Ethiopian troops “could politically destabilise Somalia, galvanise Islamists and even revive genuine pan-Somali opposition against the Ethiopian and Kenyan forces in the country”.

A golden opportunity immediately exploited by the new head of Al-Shabab, who released a recorded audio message at the beginning of March, despite the risk of American interception or drones attacks. So far Godane has never managed to rouse large scale popular support but the return of the Ethiopians provides him with an effective tool to sway the masses; to speak to the young, to new soldiers, to new martyrs. The dream of a Great Somalia, encompassing lands inhabited by Somalis now situated within the borders of Ethiopia, Kenya and part of Djibouti lives on. In the Somali quest for ethnic unification, the role played by Ethiopia is perhaps the touchiest of all.

“There is a long and bloody history between Somalia and Ethiopia and unresolved land disputes that should be settled first”, is how Ahmed Ali M. Khayre, a Somali and researcher in international law at the University of London, summed up the situation to East .

“It would be inconceivable to send Indian troops to Pakistan for peacekeeping purposes or Iranian troops to Iraq for the same reasons”, he continues, questioning the ‘neutrality’ of the AMISOM peacekeeping force. The 1977 Ogaden War between Ethiopia and Somalia, which led to Mogadishu losing a large chunk of territory, is an indelible blot on the dream of a Great Somalia. But the Ogaden War did not only wound national pride. At stake here is control over land and resources in a part of East Africa, which – following on recent discoveries in the region – oil company experts suspect may have the potential to become a promising frontier for future petroleum and gas production.

This is another reason why the Ethiopians were already in Somalia. Their entry is nothing more than a formalisation of their long-standing presence in the country. The Ethiopians entered Mogadishu in December 2006, when the “Islamic Courts Union” (ICU) had seized power in Somalia. The Ethiopian army, with the blessing and support of the United States, overthrew the ICU and replaced it with a temporary Somali government (the TFG), staying on in the country for another two years to guarantee the survival of an executive that only really existed on paper and in international circles.

Strong regional and international pressure led to a withdrawal of Ethiopian troops in 2009, partly as a result of allegations concerning serious human rights violations by some of its forces. Yet Ethiopian forces have remained in Somalia nonetheless, though more discreetly.

In league with Mogadishu, they have watched over a kind of buffer zone along the country’s borders, defending a slice of Somali territory and its villages. As ex-ambassador Shinn pointed out, by joining AMISOM, Ethiopia is now receiving reimbursement for military operations in Somalia that up until now it had been funding itself. In spite of opposition, the Somali president Hassan Sheikh Mohamud has welcomed the decision to include Ethiopians in AMISOM, claiming they will add “energy” and boost efforts to defeat al-Shabab. With the help of the Ethiopians, the African force could now be more effective.

The Ethiopians know Somalia well, are well trained and used to fighting. A few weeks after they joined, AMISOM started making notable headway on the ground, wresting one village after another from Shabab control.

But the doubts remain. “I believe the approach to Somalia is still mistaken”, concludes Ahmed Ali. “Is Al-Shabab the only reason we have no functioning government in Somalia? And if Al-Shabab is militarily defeated can Somalia’s protracted political stalemate come to an end and the country be reborn? The facts don’t bear this out.”