The Art of War

The text has gone down in history as Sunzi Binfa (孫子兵法): The Art of War, by Master Sun Tzu, the Chinese general and philosopher who is believed to have lived from the late sixth to the fifth century BC. 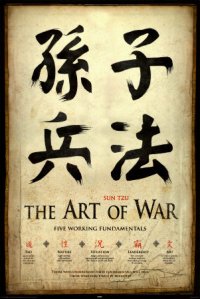 The Chinese character 兵(bīng) – signifying soldier, army or weapons – represents two hands holding an axe, the Chinese weapon of war par excellence. While the compound character 法(fǎ) means method, norm or art: the three lines on the left symbolise three drops of waters; on the right is the verb 去(qu), ‘to go’. This small volume, which it is said informed the military decisions of campaigners like Mao Zedong, Napoleon Bonaparte and General Douglas MacArthur, makes clear reference to the technical aspects of battle, of which Sun Tzu offers a concrete overview across a range of themes, from battle gear and espionage to strategies of attack and techniques for inciting the troops.

Nevertheless, the work’s particularity lies not in its attention to the details of military techniques, but in its analysis and description of war as an allegory of life. Because war, seen from Sun Tzu’s Chinese perspective, is synonymous with evolution, revolution and change, aspects of experience that determine life’s flow.

That which corrupts the soul, on the other hand, is stasis, because it places individuals in a condition that opposes life’s forces and the natural course of things, annihilating the soul and placing the truth beyond our reach.