IT
art and architecture

In times of crisis a new way of living is being developed, cohousing. It means leaving together while still having one’s own individual spaces, rediscovering the true value of neighbourhood that urban forms of existence have quashed. 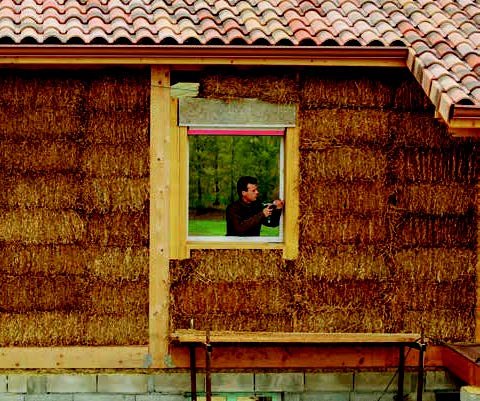 There’s an ancient and irrevocable bond between the home and the economy. It is the bond between the ancient Greek oikos and nomos: respectively, the household (which holds things together) and the rule (which establishes how things are run).

Thus, as the economic crisis is above all a housing crisis, depleted finances mean that our ways of living have to be reassessed.

Because despite our having grown to accept living in reinforced concrete apartments in anonymous high-rises, there’s not just one kind of housing, but many construction technologies and methods, and various community models and social and collective structures that are slowly changing over time and which, in part, exist side by side in cities, or nearby.

Thus perhaps the most interesting development that has taken hold in recent years is the possibility of coming up with new forms of collective living: a kind of elective neighbourhood that stems from the realisation that if both our family ties and welfare service networks have slackened, leaving us increasingly alone, we must weave a new social fabric, because together we can offer one another mutual support.

This being the key to co-housing, there are two fundamental conditions that have to be met for it to be practical: the creation of private dwellings sharing common amenities; and the residents’ active participation in the decisions that need to be taken to make the structure work, from its design to its everyday operation.

These elements, and their many variations, spawned collaborative housing in Northern Europe in the 1970s, spurred by the feminist movements, and have been spreading like wildfire in the Mediterranean and the rest of the world since the 2007 crisis.

In Munksoegaard, Denmark, for example, the search for a simple, systematic ‘eco-nomy’ inspired a group of co-housers (who shared an ecological vision) to design and build their own homes, with traditional, low-cost, high-grade and high-performance materials such as wood, clay and straw. For example, straw, the dry stalk of cereal plants, is a natural by-product as well as a great thermal insulator that moreover creates a solid foundation that can withstand earthquakes and fire when compressed into walls.

Today, interest in various forms of selfbuilding with traditional but forgotten materials, such as wood and straw, has also grown in Italy. However, Italy’s labyrinthine laws forbid people from building their own homes (in accordance with a few, clear regulations) by simply notifying their city administrations – as can be done in Denmark, and even in neighbouring France.

Nevertheless, groups such as the Associazione Italiana Edilizia in Paglia (Italian Association of Straw Bale Constructors) have been burgeoning. They are helping people rediscover sustainable lifestyles based on the most advanced international scientific research, as well as fostering a return to a “family” building system, where anyone can build their own home with their own hands, an experience made all the more worthwhile when shared with helpful friends and relatives.

One notable experiment in the publicprivate administration of large common spaces such as cafeterias and gyms – used by public entities during the day and by a community of co-housers for a nominal fee in the evening – is Stoplyckan, in Sweden, a collective neighbourhood in which over 400 people live in 13 apartment buildings. Holland, on the other hand, boasts the greatest number of cohousing communities for the elderly (over 200), which are State funded to reduce social and health care costs. Since today’s 60-year-olds can expect to live another 20 years, the issue of old age is becoming one of the most radical, and most difficult, social changes of our era.

The prospect of living one’s golden years independently and in a community is attractive even in Italy, a country in which the tradition of the family entity is more deeply rooted (though fading fast). In Europe, two prominent pilot project of cooperative living combined with new forms of collaboration between the public and private spheres took off on Coin Street in the UK and in the Vauban district in Germany.

In the former case, a group of residents of London’s South Bank successfully blocked a project to turn their neighbourhood into a site for hotels and offices, spawning an action group and later, a social enterprise, the Coin Street Community Builders (CSCB). By creating housing, leisure and cultural facilities and parks, and organising courses, workshops and events, the CSCB have transformed the neighbourhood into a mixed-use urban centre that attracts Londoners and visitors from the world over.

In the early 1990s, in Fribourg, on the former site of a French barrack, the Forum Vauban, an NGO founded in 1994, conceived and built a model district that created a balance between inhabited and commercial areas, giving priority to pedestrians, participatory design and architectural choices that reduced energy demands and developed solar energy.

In 1995, the city chose the Forum Vauban to be the collective’s legal representative body. In recent years a heated media debate has begun in Italy on the issue of cohousing, accompanied by the emergence of various projects based on groups of selforganised families (Turin’s CoAbitare is a particularly interesting example) or service companies whose team of experts (builders, architects, psychologists) help families navigate the process of designing and completing a cooperative.

One such example is the Milan-based Co-housing Venture, which helps potential co-housers find a building or area to renovate, as well as other participants with whom they can create a community, and follows them through to its realisation. Another evolution in housing models to have come to the fore during the crisis in Italy involves new forms of private social housing. The current leader in this sector is the Fondazione Housing Sociale, whose dozen or so projects integrate architectural, finance management and social elements that are likely to decide the building’s future.

Construction has just started on one of those projects, in Milan’s Via Cenni distinct, where the largest residential complex in Europe is to be built in just 14 months, with wooden foundations: four nine-storey buildings for a total of 124 apartments, all of which have Class A energy ratings.

In other words, average yearly energy consumption will be under €300 for a 100-square-metre apartment, compared to the average costs of heating in Italy of €1000-1500. Sustainability, efficiency and solidarity – through centrally located collective spaces (including shared laundry facilities, a ‘living’ or common room and a tool room for residents; a foyer and physical therapy centre open to the city) and novel residential amenities (including ‘day mothers’, mutual-support families and a Social Administrator) – are the keywords to a new community that is heralding an innovative model of participatory collective living.