The decline of Europe, wrong-footed by Moscow and Athens

Whatever the outcome, there’s something out-of-kilter about the diplomatic clash over the Ukraine. Just think. On the one side there’s Russia, with its president Vladimir Putin trying and hoping to get Europe and the United States bogged down in an open conflict. On the other there’s the US, ready to supply Ukraine with arms. And in the background, way inthe background, stands Europe. Or what little remains of it. 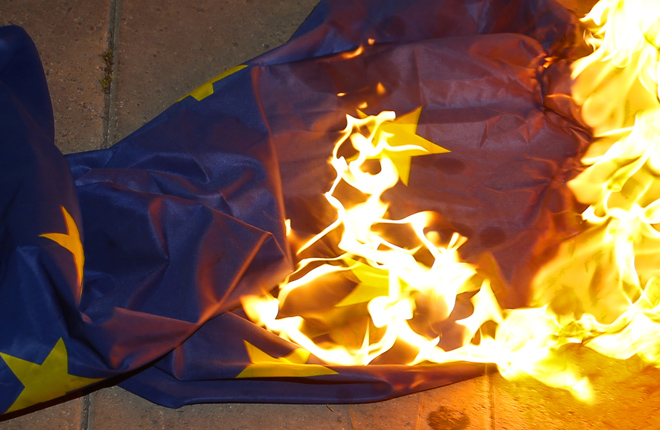 Toothless, unable to provide any kind of unified management of the Union’s interests and ultimately unconcerned about what its actions lead to. That’s where Europe stands today, with the feebleness of its attempts at reconciling Moscow and Kiev there for all to see.

The issues involved are many. The first is perhaps the most worrying in the long term. How can Europe hope to survive if its unity stays on paper and crumbles as soon as it has to face up to reality? Think of Italy, still divided between North and South. Or Greece, and its relationship with Germany and the EU, viewed as threatening, not allies. The endless discussions over the Greek debt highlight the failure of an integration process that was meant to be different. Speaking to a long-term French diplomat recently, in a discussion that provided plenty of insight as well as uncertainty over the fate of Europe, I asked myself how Europe could be described to a child. What’s it shape? What is Europe? Who or what represents it? If we take the Ukrainian crisis as our test case, there’s no point underlining that every answer has a negative connotation. Currently Europe is nothing more than a geographic outline, within which there’s plenty of division and invisible walls that stop it growing and developing (and will in the future too).

No point beating about the bush. Europe is not representative nor has it acquired legitimacy. Italy, one of the six founder members, has handled its six month EU presidency with the utmost superficiality. It asked for a post, the EU High Representative for Foreign Affairs and Security Policy, granted to Federica Mogherini. I hope the former Foreign Minister will forgive me, but if there was any chance of doing worse than her predecessor, Baroness Catherine Ashton, Mogherini is doing just that. Negotiations with Moscow, Kiev and Washington are being carried on by French President François Hollande and German Chancellor Angela Merkel, not by her. And this is the kind of unity, the kind of jointly agreed representation that Europe wants to displaybeyond its borders. In the many EU countries currently suffering the brunt of what amounts to a redefinition of production factor’s within advanced economies more than an economic crisis,the younger generations have a hard time acknowledging European authority and often see it as a threat, as a devil to be exorcised or an enemy to be vanquished.

The second question is no less scary than the first. When will the final collapse take place? Europe has been unsuccessfully trying to find its own equilibrium since WWII. Up until 2008 and the Lehman Brother’s crash it did seem to have bearings of sorts, mainly fuelled by economic interests. It created the Eurozone, the European Central Bank (ECB), the single market and, with some difficulty, it set up what seemed like a solid backbone to manage financial crises, at least in theory. The problem is that the developments in the economic and financial fields have not been followed up by its politicians, entrenched in their ivory castles and divided, both territorially and culturally, just as Europe always has been. The longer this goes on the worse the economic situation gets, the greater the rifts and the asymmetries, and the faster the decline.

Finally, the third and last question. What can Europe do to change tack? Or more aptly, how can it hope to stop its current decline? Change without hope is not possible. And seeing as hope is becoming a rare commodity among the younger generations (according to Eurobaromeer) and is waning fast even in the older ones, the prospects don’t look good. A further blow could be dealt by the United Kingdom referendum: if London votesto leave the EU, the loss of credibility would be unimaginable, and the same would be true if Greece departed. A situation from which Europe has learned very little and could be seen as one of the worst pages of its history.

Devoid of identity and common ground, Europe needs to restore the dreams of Konrad Adenauer, Joseph Bech, Alcide De Gasperi, Jean Monnet, Robert Schuman, Paul-Henri Spaak andAltieroSpinelli. It has to reassess its world position, and there’s a nasty feeling that it could be too late. The decline of Europe’s international politics has already been apparent in its management of the Balkan conflict and the first Gulf War. What we’re witnessing today, the awful dilly-dallying and indecisiveness that has become a trademark of European foreign policy, is the result of the wrong choices made in the last decades. To fuel a dream one needs hope in the future and the ability to learn from one’s mistakes. Two ingredients that Europe is missing right now. Europe, is anybody home?