The expats at the service of DNR propaganda

The examination of emails leaked from computers of the “Dontesk republic” goes on. The separatist propaganda machine is in the hands of a handful of foreigners linked by anti-American sentiment. But torn by a struggle for power.

The DONi press agency is in fact a control room for information. Its director, the Finn Janus Putkonen, who moved to Donetsk to carry out his mission, checks the foreign journalists who apply for accreditation to the press center of the DNR, writes reports on them, sets the information policy of the “republic”, works on destroying evidence about Malaysia flight MH17, and reports weekly to the “Ministry of Information”.

With him works an international team of “volunteers”, including a former CIA agent, David “Dave” Simpson, who expressly states that he takes orders from a Moscow official, Roman Manekin. The latter writes on his VK page that he works for the press office of the Ministry of Foreign Affairs of the Russian Federation.

On April 5, 2016, Dave Simpson writes an email to Putkonen, with the subject line ‘top secret’, in which he says that “Manekin is the *** Officer assigned to me by Moscow. If you know something I don’t I’m happy to listen, but it is my understanding this is the guy I report to and am responsible to here”. From another email exchange between Simpson and Tatiana Egorova of the Ministry of Information to arrange an interview with the Russian television station NTV it appears that Manekin is often together with the American.

Simpson arrived in Donbass in early 2016, and was promptly showcased by Putkonen as a former CIA agent disgusted by American imperialism and ready to help the cause of the DNR. His appearances on DONi and other local TV stations quickly multiplied. So much so that Putkonen wants to create a series of documentaries entitled “Donbass life with Dave“. He has written a synopsis of four episodes and on March 18 he sent it to Egorova for approval. The series, however, never saw the light.

Simpson – and, behind him, Manekin – seems to be steadily gaining power. And maybe he treads on Putkonen’s toes, who demonstrates that he has more power than expected. He was the one to forward the “top secret” email to Egorova and, on June 5, sent the former CIA agent a letter of dismissal. However, not before having it approved by the top floor of the ministry. “By your own emailed statement 5.5.2016 you confessed clearly that [security] rules has been broken constantly and against direct orders by Janus Putkonen by providing reports from your working position to the third party (mentioned person in your email). Violation of security agreement has been reported to DPR national security officials and investigation has been launched today”, the DONi chief editor writes.

Destroy the evidence on MH17

Putkonen is the real deus ex machina of separatist propaganda. He is the one who classifies the journalists as “friends” or “enemies”, the one who recommends issuing or refusing them accreditation to work in Donetsk (“OK person” or “Recommendation: NO”), the one who sends “weekly reports” to the ministry, and the one who suggests to “control the movements” of those who he doesn’t trust. And when he expresses his disappointment about a “Novorussian” journalist who doesn’t work as he would like, Egorova promptly reassures him: “This journalist is under our control, so don’t worry… :)…..”

He is also the director of a “movie” on the downing of the Malaysia Boeing in 2014, a tragedy under careful and objective international investigation and a target for Russian disinformation. “We really can blow up all the “evidence” that the SBU [Ukrainian secret service] have produced about the BUK [anti-aircraft system] in Donetsk with the help of Max Van Der Werff from the Netherlands”, he wrote to Egorova on October 14, 2015 .

Van Der Werff offered his investigations on MH17 from his website Kremlintroll.nl and began to send Putkonen and Egorova his analysis and deconstructions of the articles appearing in the international press. He met with the “Minister of Foreign Affairs” of the DNR, Alexander Kofman and prepared an action plan to discredit Dutch investigators.

And Putkonen oversees all this in the name of journalism and truth. Because the machine of separatist propaganda, even in tiny DNR, is working at full capacity. 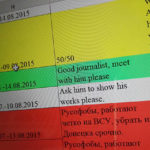 How DNR propaganda is linked to Italy 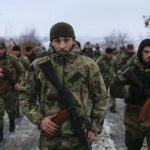 That weird idea of an International Criminal Court on Russia