The new European governance: not just two groups hammering things out, but four. And Italy still has to name its Commissioner

For the next five years Europe will be led by forces in favour of European integration that have clubbed together against the sovereigntists and won the elections on 26 May. But these could be the last five years of unconditional credit that the citizens of the 28 member states (27 without the United Kingdom) are prepared to bestow on the European institution’s top management. Because at this point the need to reform the European institutions,  enabling them to provide answers to the demand for work and security on the continent , calls for solutions not just promises.

After all, the belaboured recent process of appointing the five European ‘Top Jobs’, meaning the presidents of the Commission, Parliament, EU Council, the ECB and the High Representative for Foreign Affairs and Security Policy reveals the problems the European nomenclature is having to face. Unlike 2014 everything has got that much harder following the collapse of the traditional People’s Party- Socialist duopoly. The Europarliamentary majority now includes allies such as ALDE and the Greens, thus complicating the puzzle surrounding the appointments with four groups rather than two now involved. Firstly, the “spitzenkandidaten” method by which the political forces used to choose the candidates, and which in 2014 led to Jean-Claude Juncker being appointed Commission President, this time didn’t work as hoped. The EPP candidate, Manfred Weber, despite collecting the most votes, did not gain the support of the socialists and liberals and is certainly not in the French President Emmanuel Macron’s good books. The appointment puzzle has therefore become a proxy battle between the Liberal Macron and the German Chancellor Angela Merkel, who sponsored the People’s candidate Weber all the way. On the night of the summer solstice, between June 20 and 21, an informal meeting at the bar of the Hotel Amigo in Brussels between Macron, Merkel, Italian prime minister Giuseppe Conte and the Luxembourg Prime Minister Xavier Bettel drew a blank. Around four in the morning Bettel cut to the chase: “but we already have an ideal candidate for the Commission who could hold her own against Trump and Xi and that’s you Angela”. The German Chancellor, despite the late hour, laughed wryly and cut him dead: “let’s talk about reality, not fantasy”.

For the days preceding the summit and up to the next one on 30 June the EU Council President Donald Tusk has taken it on himself to identify the profiles of potential candidates, to come up with a shortlist, rearrange the qualified majorities of countries and populations while facing off blocking minorities. An exercise that saw all the “spitzenkandidaten” fall by the wayside, not just Weber but also the Socialist Frans Timmermans and the Danish Liberal Margarethe Vestager. Feelers were put out among the Liberals including Belgian prime minister Charles Michel and Dutchman Mark Rutte but among those best suited the strongest candidacy appeared to be that of the Frenchman Michel Barnier, the Brexit negotiator, followed by the Lithuanian Dalia Grybauskaite, the Bulgarian Kristalina Georgieva, the Crotian Premier Andrej Plenkovic and even the Croation President Kolinda Grabar-Kitarovic.

Then, once the presidents of the Commission and Parliament have been elected, negotiations will begin for the Commissioner posts. Italy is well aware that after great harvest in recent years, with three top positions out of five, it will have to make do with a commissioner. But, the Government’s representatives claim, “it will have to be a major portfolio”. Parliament has recently passed a resolution asking for a portfolio that is of “exclusive European competence”. And there are only five that have exclusive European competence: the customs union, competition regulation, common commercial policy, international trade and conservation of marine biological resources. But the real problem for Italy is the name of the new commissioner. Everyone recalls the time when the European parliament rejected the commissioner candidate Rocco Buttiglione owing to his homophobe statements. It can’t be ruled out that a League candidate could receive the same treatment from a Euro-parliamentary majority that is entirely anti-sovereigntist. That’s why the option of the current Foreign Affairs Minister Enzo Moavero, who has a real understanding of the workings of the Community machinery, hasn’t yet been ruled out.

Partly because a figure who is not openly hostile to European policies could receive a ‘soft’ treatment in the possible and not entirely prevented infringement procedure for excessive deficit due to a debt that is out of control.  Even the Italian Prime Minister, Giuseppe Conte, has had to admit that the path to prevent the infringement procedure is a steep one. In fact it is rife with problems and no one in the old Commission or among the member states seems prepared to make any kind concessions. The gap between positions in Brussels and Rome is still a wide one.  Brussels stands firm: Italy has a consolidated “hole” in its accounts of 0.4% in 2018, and one of 0.5% in 2019, which becomes 0.1% if one refers to the debt rule rather than the total rule. A significant difference which the rules actually permit. On paper gap that needs to be bridged in order not to breach the Pact is therefore 0.5% for 2018-2019. That’s more than eight billion euro. Even if we wished to rectify just 2018 Italy would have to find between six and seven billion of structural savings, without counting the two billion that have already been set aside in the budget after the agreement reached with the EU in December, which have already been accounted for in Brussels’ estimates. Plus, there’s the ‘aggravating factor’ that in 2020, for the ‘quota 100’ pension plan and the citizen’s income, the deficit will exceed 3%. So the government must provide reassurances on the next budget, while also providing details on where it intends to find coverage for the ‘flat tax‘. But these estimates, Conte keeps repeating, are not a representation of the real situation “We are the ones who monitor the situation at close quarters and know the real cash flow, not Brussels”. If this is the tune, it’s hard to see how matters can progress. Nor can one rest hope in a ‘friendly’ attitude on behalf of an ECB without Mario Draghi and his “whatever it takes”. 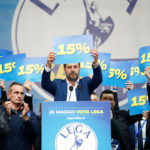