From the ‘defensive nationalism’ of the Nineties to the recent victories in Istanbul and Ankara: the strategies of a party that is trying to win over the AKP’s electorate

The election of Ekrem Imamoglu as mayor of Istanbul, which took place on 23 June following the rerun of the administrative elections held on 31 March, has once again opened up the debate on whether an alternative can be found to counter the AKP, which despite fraying slightly at the edges after the defeats in Istanbul and Ankara, can still rely on a solid segment of the electorate.

The main party fingered to ride the wave of a potential change of the guard at the pinnacle of the Republic, the CHP (Cumhuriyet Halk Partisi) seems to have found a new standard bearer in the newly elected mayor of Istanbul. Thanks to the 54% majority he secured in the latest electoral campaign, Imamoglu is rightfully considering running in the presidential elections to take place in 2023. A legitimate ambition which, as many analysts were quick to point out, would seem to be born out by the emphatic tone used in his acceptance speech following his victorious municipal election.

But can what Imamoglu termed “a new start” for the city of Istanbul also represent a new beginning for the CHP?

In spite of the credit it deserves for modernizing the country and establishing its republican structure, thanks to Mustafa Kemal Ataturk first and Ismet Inonu later, in the years of multiple parties, the CHP could not plaster over its structural and ideological limitations which over time wore away its political prestige. Alongside the difficulty of guaranteeing a turnover in leadership, the CHP has often been criticized for its ideological position that has been unable to address the needs of Turkish society and, despite being termed a “centre-left” force by Inonu in the 60’s, it has tended to back policies that do not meet the approval of its European counterparts. An example of both these limitations can be found in the long presidency of Deniz Baykal (1993-2010), during which time the CHP engaged in a form of “defensive nationalism” which led it to refusing all compromise over the possibility of wearing the veil in public places and adopting Euro-sceptic attitudes. Its unclear ideological positioning and the presence of a structured left wing party such as the DSP (Demokratik Sol Parti), meant that in the political elections of 1999 the CHP didn’t make the 10% cut off threshold and thus for the first time since the institution of the Republic was not represented in Parliament.

Mindful of this shock, when Kemal Kilicdaroglu obtained the party presidency in 2011 – after a sexual scandal had overwhelmed Baykal and forced him to resign – he engaged in a thorough overhaul. In order to shed its mantle as an ‘elitist’ party that didn’t listen to the needs of the people, it introduced primaries in approximately 173 provincial districts, while on the ideological front, once its original Kemalist approach had been partially relinquished  in favour of more ‘centrists’ positions, it also opened up on issues such as wearing the veil in public places and the Kurdish issue. Important changes which haven’t modified the approach of the party’s base. Even in 2013,  Birgul Ayman Guler, a member of parliament, stated that: “We (the CHP) cannot consider the Kurdish ethnic group and the Turkish nation on the same plane.”

Despite the difficulty of shedding old paradigms, the line promoted by Kilicdaroglu enabled the CHP to secure 25% of the vote in the 2011 elections, gaining close to 3.5 million voters more than during the 2007 elections and establishing itself as the country’s second largest party. However, an analysis of the vote highlighted how the CHP had not managed to make ground among the more destitute sectors of the population nor had it made any inroads within the conservative elecorate which has always perceived the CHP’s militant secularism as indicative of a stubborn rejection of the religious traditions which the AKP, the ruling party since 2002, staunchly defends.

The desire to close in on the majority party and expand its electoral base seems also to be at the root of the choice to put Muharrem Ince up for the presidential elections held on 24 June 2018, despite Kemal Kilicdaroglu’s preference for the former President Gul (who is also a founder member of the AKP). The fifty four year old Ince, who according to the New York Times could have unseated Erdogan, is totally different from the usual CHP candidate both in terms of his social extraction – he hails from a farming community in the province of Yalova – and his political programme, centred on his motto Degistir (change) in economic terms, with a particular focus on agriculture and the strengthening of the basic economy, bolstered by his approach to propaganda. With the help of his sister, who usually wears a veil, he managed to win over a considerable section of the conservative electorate. An additional element of discontinuity was his readiness to open up towards religious minorities, primarily the Alevites, and his reaching out to the Kurdish community, which culminated with a strategic visit to Selahattin Demirtas, the leader of the HDP currently in jail.

Though the final outcome was not in his favour, Ince’s candidacy, which obtained 30.6% of the vote, nevertheless eclipsed the previous best showing of the CHP by 8 percentage points and could be considered a forerunner of the victory by Ekrem Imamoglu in the Istanbul elections.

In the wake of Ince, and along the same lines as what was done for the new mayor of Ankara Mansur Yavas, a candidate was selected for the Great Istanbul Municipality that enhanced certain aspects of Turkish traditionalism. A religious man with extensive knowledge of the Qu’ran and a participant in the Friday prayer, Imamoglu’s 54,03% of the vote includes a sizeable chunck of the centre-right electorate who hasn’t forgiven the AKP for its handling of the economic and financial crisis which hit the country in the last year as well as members of the poor and destitute classes who view the battle against poverty promised during the electoral campaign as a path towards improving their living standards.

The choice of candidates is so far flung from the CHP’s traditional catchment area that it has to be analysed very closely. It provides a clear indication of how the long era of the AKP has influenced the main opposition party in its choice of candidates and political programme. A change that has had a pronounced bearing on the electorate and meant having to come up with new languages and new rules of engagement for the electoral campaign.

What still remains to be understood is whether the consenus achieved so far will be confirmed in the next elections and whether the CHP will continue to follow the path set so far. In the aftermath of his victory, Imamoglu was criticized for not having adequately represented the party during the electoral campaign. Thus an internal battle is being fought within the CHP to establish the future image of the party and its outcome, which is so essential for the next electoral campaigns, is hard to foresee. 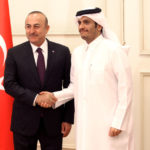 Turkey-Qatar: the reasons behind an alliance