If he wants the job, the country’s first directly elected President can be Tayyip Erdoğan. 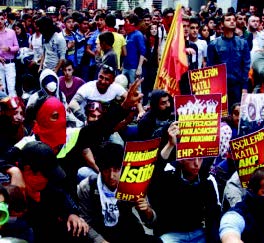 On August 10 Turkey will go to the polls to elect, by popular vote for the first time in republican history, its new President.

Coming in the wake of the municipal elections of March 30 and to be followed by the general elections of June 2015, this electoral round may alter the nature of the Turkish political system.

The strongest candidate for the Presidency is Prime Minister Tayyip Erdoğan. He is on record as having expressed his preference for an unfettered presidential system, one he believes would give the country a more efficient executive.

The presidential role Mr. Erdoğan favors would be unencumbered by checks and balances and arguably would be a system without accountability. But even with the current system Erdoğan – who as of this writing still has not officially announced his candidacy – has said that he would be a hands-on, executive President and not a ceremonial head of state.

Given the Prime Minister’s unprecedented accumulation and concentration of power in recent years, many Turks were concerned that a move towards a presidential system might lead to a system of elected Authoritarianism. In the event, Erdoğan’s plans to transform the Turkish parliamentary system were thwarted, first by the Parliamentary Commission mandated to draft a new Constitution and then by the movement born with last year’s Gezi Park protests.

The Prime Minister chose to respond to the Gezi defiance with rage. He refused to treat this mobilization initiated by urban, mainly youthful, educated classes – later joined by other segments of the urban population – as a legitimate act of protest.

Although the protests began as a reaction to police brutality against environmentalists objecting to the uprooting of trees in the small Gezi Park to make way for a shopping mall – still another shopping mall, that is – the underlying causes were deeper, growing out of accumulated resentment against increasing social conservatism, infringement on personal privacy and the repressive political and media environments. Because the Prime Minister decided to treat these events – which quickly spread to 80 of Turkey’s 81 provinces – as a plot to undermine his government, he reacted angrily, vilifying the protesters and unleashing police violence that ultimately claimed seven lives. This was in contrast to the more conciliatory gestures and lan guage of President Abdullah Gül and deputy Prime Minister Bülent Arınç. Still haunted by the experience of the Gezi protest, the Prime Minister was confronted later in the year with a far more formidable challenge.

On December 17 and December 25, two waves of graft probes shook the country. Three ministers’ sons and businesspeople close to the government were indicted when a barrage of incriminating, legally and illegally obtained tapes – some directly involving the Prime Minister and his own son – were disseminated through Twitter and Youtube, which were duly banned. The Constitutional Court has since lifted the Twitter ban; YouTube is still inaccessible.

The Prime Minister and his ruling AKP Party entered the first round of Turkey’s 18 monthlong electoral cycle, the municipal elections, while fighting these probes, which they believed were inspired by a former ally, the Gülen movement, strongly represented in the judiciary and the police. The Prime Minister fought against graft indictments and the compromising recordings implicating him in financial wrongdoing by dismissing prosecutors, removing judges and directly intervening in the judicial process. Thriving in adversity and the intensely polarized atmosphere that he himself helped generate, Erdoğan managed to keep the loyalty of most of his supporters. His party ended up collecting a stunning 44 percent of the vote.

With that result and the obvious inadequacy of the opposition challenge, the Prime Minister’s presidential ambitions have been resurrected and fortified. The expectation that he would exchange places with the current President Abdullah Gül vanished as Gül took himself out of the prime ministerial contest by declaring that “under current circumstances” he did not “entertain political ambitions.” So the way is clear for Erdoğan to become president. Given that the Turkish system gives strong powers to the prime minister’s office, the presence of a popularly elected President could easily create problems of legitimacy and contesting mandates.

Nothing in Mr. Erdogan’s career suggests that he would be willing to share power, let alone cede the authority that he has so effectively used in the past 11 years to dominate the political scene. His quandary then is how to be the chief executive in a system where that position belongs to the Prime Minister.

Will he be able to find a subservient premier – a ‘Medvedev’ to his ‘Putin’ – able to restrain his ambition and let Mr. Erdoğan effectively run the country from the Presidential Palace? That is the question. The answer awaits Erdoğan’s definitive decision. If he want’s the job, it is probably his.