What is Trump‘s real objective? Why has he opened up so many fronts with China? These complex questions need to be looked at from various angles. If the question were posed merely in order to understand whether the clash over tariffs is just part of a trade war, then the answer would quite simply be no.

The imposition of duties on imports began in March 2018, has been extended and suffered retribution, and has led to a long and drawn out negotiation of which one has a hard time imagining the outcome but one can readily expect it to be positive.

Supposedly an agreement will be found with mutual concessions that will enable both signees to beat their drum. To a greater extent than Xi Jinping, who is not used to public oversight and has little familiarity with Twitter, Trump will be able to waive the agreement as proof of his negotiating skills. Even if no agreement is reached, he would have an easy time underlining his hard bargaining practices with China. His antagonistic approach to Beijing was one of his hobby horses during the last electoral campaign and he certainly hasn’t wasted any time fleshing it out. The president was faced with the astronomical figure of close to 276 billion dollars, the amount of the United States trade deficit with China at the end of 2018 (a few estimates are even higher, based on different statistical calculations. But I any case the figures are impressive). In previous years the figures had wavered but have always been detrimental to Washington.

The obvious conclusion drawn by the White House was very simple and direct: this trade imbalance had to be reduced by making Chinese goods more expensive and the imposition of tariffs was thus the way forward. Then again,  a more extensive dispute with China had to be set in motion, calling for structural reform: improved access to Chinese markets for United States goods, under the same conditions as local ones, a reduction of export subsidies, protection of intellectual property rights and the removal of the obligation to transfer technologies to Chinese companies, plus reassurances in relation to cyber-espionage. Forcing China to sign would automatically mean a loss of a number of its advantages. Its goods would become less competitive and imports to the United States would drop. In addition, it would discourage companies meaning to invest beyond the Great Wall – because shipping their goods back to the US would be more expensive – and they’d therefore not delocalise, thus improving employment figures in the States. The negotiated imposition of these measures – of which the tariffs are only the more resounding feature – seems to be a fast way of upholding Trump’s main motto: Buy American, Hire American.

In actual fact, theoretically speaking, a country can’t survive for long with such an outrageous trade deficit, especially seeing as the one with China is compounded by those with many other partners (the EU, Mexico, Japan, South Korea). So while Trump has a real problem, are the solutions he suggests appropriate to solve it, or is the real objective currently not in the cross-hairs? In 2018, the trade deficit with China increased by 17%, reaching 323 billion dollars, the highest value since 2006. With or without tariffs, it looks like consumers can’t do without Chinese mass consumption products, and manufacturers are not prepared to give up on the instrumental assets provided by the Asian giant.

It could be that the measures have not as yet had time to affect prices, but the Dragon’s invincibility persists: who can provide a better price/quality ratio, which country can be as successful in managing its value chain? Yet, indirectly this news could have positive repercussions for Washington.

Beijing has an impact on both the United States’ deficits, its trade and its state deficit. With the profits of the first it funds purchases of the second. It sends goods containers across the Pacific and – with the same currency – it buys American assets: houses, factories, corporate bonds. But most of all it buys public debt. Beijing’s coffers are stashed with Treasury Bonds worth approximately 1,100 billion dollars, equivalent to 1/3 of Chinese reserves, which are notoriously the largest in the world.

If China were to stop buying US treasury bonds, or if it intended to cash them in, or even shift them onto other assets or currencies, the repercussions would be dramatic and the more strictly political sphere would be involved. The analysts – not without concern – call this possibility the nuclear option. The prospect is certainly far off, but somehow the Treasury Bonds have to find a buyer and China may not always be prepared to foot the bill. It’s current account surplus (the difference between its trade balance and its net profits from foreign investments) is dropping and will probably be in deficit in 2019 for the first time since 1993. This shift is affected by the considerable expenditure abroad of 140 million Chinese tourists in 2018 (+13.5% compared to the previous year).

Beijing will probably have to dabble with its credit for investments to reduce imports, but this would interfere with the promises made to Trump to increase acquisitions in energy, automotive and soya beans that were agreed at the negotiating table to appease Trump’s electoral base. And it is therefore possible that China will have to decide which deficit it should fund. Continuing to do so for both would be difficult because its resources are dwindling: its trade profits amounted to 1.7% of GDP in 2017, it was 8% in 2008. Ultimately, the increase in exports makes importing easier.

Then again: will tariffs help to improve the United States economy? The facts confirm the doubts. Most manufacturers along with trade, car manufacturer and consumer associations have opposed this trade war. Manufacturing and buying will cost more than before, because it’s difficult to replace Chinese products. In any case it will be extremely unlikely that any old factories will open up shop again. The traditional manufacturing processes have been shipped elsewhere for decades now, cities have converted to the service economy, certain companies like the legendary Harley Davidson will close its plant in Milwaukee and manufacture elsewhere. If they penalise China, it’s likely that the imposed tariffs will result in favours for other United States supplies such as Vietnam, Indonesia and Brazil.

But there’s more: are Chinese goods actually Chinese? The value of an iPhone in a plane hold flying from Shanghai to Los Angeles is entirely reflected in the trade balance of the two countries, yet it is only assembled in China. The Dragon’s actual contribution to the final cost is equivalent to a few percentage points, the added value is in the assembly. If only the latter was considered at customs – and if the method was extended to a vast plethora of traded goods – trading would be measured in a very different way. Approximately half of the goods sold by China – meaning the largest exporter in the world – are the result of investments by multinationals that have delocalised to that country. They are therefore Chinese by conceptual habit, a statistical knock-on. They actually belong to globalisation, in the face of which national labels and traditional evaluations tend to pale into insignificance.

The crux of the matter lies in the imbalances that have formed during this millennium and which even the crisis of 2008, though a warning, hasn’t dented. Asia – and China in particular –  has become a vast world goldmine for the industrial world which in the East found a supplier for everything the universal consumer was yearning for, so long as value could be extracted through finance instead of creating it with production. To this day, despite what the crisis taught us, the savings of the Asian workers make consumption possible in Europe and especially in North America. This imbalance is so vast and ingrained that Trump’s actions, regardless of whether they’re right or not, are unable to eliminate it.

Unfettered by any economic misgivings, free of any political restraints, the United States multinationals have invested heavily in China. Along with European and North-Asian companies they were attracted by an unbeatable range of advantages: low cost workforce and production factors, internal stability, excellent infrastructure, an internal market to be satisfied. No country in the world could be as attractive as China. This led to one of the most bizarre marriages in economic history, between representatives of a liberal establishment and a strongly communist state. Even China has profited, with the spectacular economic successes that are recorded in the news every day. Poverty has disappeared, backwardness has been defeated, the citizen’s wellbeing has improved exponentially. The economy has projected the country into an unbeatable dimension, at an astounding rate and with an enviable pragmatism. This marriage is at this point too entrenched to come unstuck immediately; it’s not inspired by feelings but by interests and these always tend to stick together, unless traumatic events intervene that can tear them apart. The current situation owes its genesis to its recent past. It would be an issue for any presidency, not just Trump’s administration.

The actions of the White House therefore go beyond the tariffs and focus on reducing the negotiating clout China has acquired over the years. Now Beijing is cashing in the political dividends that its economy has secured. It is spreading its tentacles and fuelling its aspirations, without concealing its pride, because it now it is in a position to do so. Consigning to history the caution preached by Deng Xiaoping, President Xi Jinping has launched a number of ambitious initiatives that have Washington seriously concerned and are the hidden target behind these current negotiations. The most important internally is “The great rejuvenation of the Chinese nation”, a patriotic push to bolster and improve the cohesion of society. One of this tool’s plan is “Made in China 2025“, a titanic effort to modernise the production system. Launched in 2015, its aim is to be rid of China as the ‘factory of the world’, the paradise of multinationals, the land of low salaries and compressed consumption, the great record buster. How much cement, steel, footwear and clothing must China continue to produce? Is this quantitative tendency still a positive for the country? Beijing is well aware that it can’t continue to rely on foreign technology, international demand and a constantly expanding economy. It wants to develop telecommunications, robotics, biotechnologies and pharmaceutics, avionics and information technology. It must drastically increase its added value per employee because its population is ageing. It wants to be rid of blue collar workers and replace them with white ones.

On the international front it is proving to be uncharacteristically active. The new Silk Road – with its twin land and sea routes – is at the core of a radical development plan. More than a route between China and Europe, it offers a chance for development to countries that have so far been hostage to backwardness. The political and strategic implications are obvious. They stem from the new balance of power that Beijing is imposing over the South China Sea. The Eastern Pacific – sailed by ships flying different flags – is managed by the United States which preserve the freedom of navigation. Now China for historical reasons is laying claim to a number of islands, on which it is building lighthouses and landings trips, thus questioning the right of the American Peace.

Washington can’t just let this very unwieldy resurgence ride, or turn its back on such a resounding change. It’s trying to fight it because it knows that the future balance of power is at stake. The tariff issue is just the tip of the iceberg. When an agreement is reached, the underlying contradictions will still be unresolved. It’s part of a much broader contest, a media synecdoche the obscurity of which will deepen the longer it lingers. 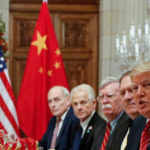 US and China face off with Brussels as ref