Someone to the rescue

Venezuela risks a military invasion, headed by Brazil and Colombia with US backing. Maduro is well aware of it and avoids stirring up trouble

“No way”. This is what the Brazilian Minister of Defence Fernando Azevedo e Silva told reporters who were asking him about a possible Brazilian military intervention in the troubled neighboring country of Venezuela. A hypothesis that has been discussed more and more openly over the past few weeks, especially since the clash between dictator Nicolás Maduro and self-proclaimed President Juan Guaidó deepened Venezuela’s political crisis. But the Brazilian defence minister claimed that military intervention is not in the cards. A view shared by Colombian President Ivan Duque, who stated that military intervention “is not the way forward” for solving the Venezuelan crisis.

And yet, that is not exactly the case. Winds of war seem to be blowing with ever greater force towards Caracas. The possibility of military intervention was first raised by Ricardo Hausmann, former Venezuelan minister and Harvard professor. In an article published in January 2018 on Project Syndicate, Hausmann stressed the need for humanitarian intervention “to end a man-made famine threatening millions of lives”. In other words, to end Maduro’s rule.

Bombastic declarations have been made throughout 2018. Just to quote a few examples, Luis Almagro, secretary general of the Organization of American States, stated that military intervention should not be ruled out, while last October, during the election campaign, Brazilian Vice-President General Hamilton Mourão spoke of a possible Brazil-led “UN mission” to Venezuela. Moreover, less than 24 hours after the victory of Jair Bolsonaro, of whom Mourão is deputy, the daily newspaper “Folha de S.Paulo” published a long article claiming that the Colombian government had reached out to the president-elect’s team, offering to form a military alliance for a US-backed military intervention aimed at overthrowing Maduro.

Bogota immediately set out to deny the allegations in every possible way. Even in unusual ways, such as the live-streamed communiqué read by Colombian Chancellor Carlos Holmes Trujillo. Such an excess of zeal prompted many to give credit to the content of the article published by the “Folha”.

That view was reinforced a few days later, when US National Security Advisor John Bolton expressed America’s interest in an alliance with Brazil and Colombia. Bolton visited the two countries and met with Bolsonaro in his apartment in Rio de Janeiro shortly after his election. The two allegedly talked about the establishment of a US military base on Brazilian territory and a possible intervention in Venezuela, then publicly denied having planned any concrete military action. However, just a few weeks later, Bolton was captured by photographers with the line “5,000 troops to Colombia” written on his notepad, right before he declared at the press conference that “all options are on the table” to solve the Venezuelan crisis. That is, including the military option, as several members of Congress – such as Senator Marco Rubio – openly confirmed. This impression was also corroborated by the Trump administration, which has recently appointed foreign policy hawk Elliott Abrams as special envoy for Venezuela – an appointment that speaks for itself, since Abrams was responsible for relations with the Contras during the years of Ronald Reagan’s presidency.

From an operational standpoint, the possibility of military intervention in Venezuela seems even more serious. In November 2017, Brazil carried out the so called AMAZONLOG, a huge military exercise in the Amazon, near the Venezuelan border. The drills involved Colombian and Peruvian soldiers as well as, for the first time, US military forces. The latter had been previously denied access to the Amazon, which Brazilian soldiers consider sacred territory. Furthermore, in November 2018, another gigantic military exercise known as CRUZEX 2018 took place in Natal. The city is famous for hosting the only US military base in Brazil, which was used as a springboard for the invasion of French Africa during World War II. The Brazilian government has also begun negotiations to rent out the Alcântara base to the United States. All these events suggest a North American military commitment in the region, possible only thanks to Brazilian logistical support.

Moreover, for several months now, Brasilia has been receiving large quantities of armaments from the US. The Brazilian Army has already incorporated hundreds of armoured vehicles and howitzers M109A, M113 and M998 which were donated – not sold – by Washington. The numbers are outrageous for a country like Brazil, which is not facing serious threats to its security, nor is it engaged in large military operations abroad. In addition to armoured vehicles, Americans are also donating large quantities of light weapons of various kinds to the Brazilian Armed Forces. In addition to all of this, Super Cobra attack helicopters and C-23 Bravo Sherpa planes are expected to arrive soon. These aircraft are ideal for Amazonian operations. Last but not least, Brazil is pursuing a policy of rearmament with the acquisition of the PHM Atlantico helicopter carrier and the construction of Scorpène-class submarines (including a nuclear one) and Gripen multi-purpose fighters. This will significantly increase the capabilities of the Brazilian military.

From a political standpoint, the US and Brazil have resumed contacts aimed at strengthening bilateral military cooperation, mainly at general staff level. But also among the chancelleries, thanks to the intense activity of Brazil’s new Minister of Foreign Affairs, Ernesto Araújo, who is considered to be the most pro-American member of the Bolsonaro government. In mid-January, Araújo met with some of the most extremist leaders of the Venezuelan opposition, later releasing a very harsh note  against the government of Caracas which drew criticism from older ambassadors for its aggressive tone. The minister’s tactlessness went so far as to irritate Brazilian military leaders, who put him under protection after recommending that all contacts with Venezuela be interrupted. In other times, this would have been a prelude to war.

Needless to say, Venezuela has been denouncing this situation for months as the unmistakable sign of an upcoming invasion. Maduro is going great lengths to retain the loyalty of the Armed Forces and has already turned to his Russian and Chinese allies for support. The two 160 Tupolev bombers and the Russian Nordwind Airlines Boeing that have recently landed in Venezuela seem to demonstrate that Moscow is also taking seriously the hypothesis of an attack and is not willing to lose such a precious ally in the US’s backyard.

South America is currently experiencing a moment of increasing tension. Unfortunately, the political crisis in Venezuela does not seem to allow for painless solutions. Maduro is not willing to relinquish power, especially as he is aware that the next step would be his condemnation to exile or a trial where he would be called to answer for his crimes. In the meantime, the opposition seems to have finally reached a consensus around Guaidò as a leader capable of dethroning the heir of Hugo Chávez. Support from abroad as well as the international recognition of Guaidò’s presidential legitimacy have galvanized those who oppose Maduro’s regime. As time goes by, the possibility of an intervention in Venezuela becomes more and more tangible, especially if the country should sink into a bloody civil war, or if its security forces should start brutally repressing the opposition. Or even if the very safety of Guaidò were to come under threat. At that point, under the legal umbrella of the “responsibility to protect”, international action would become inevitable. It is no coincidence that Venezuelan security forces are not shooting into the crowd like in 2017: Maduro is aware that a spark is enough to set things ablaze. What remains to be seen is whether he knows that his stay at Palácio de Miraflores is now doomed – no matter what happens next. 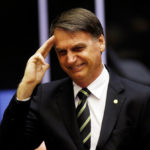