Venezuelans Took to the Streets for a Lawful Recall Referendum, but Maduro Intends to Resist to 2018… and Beyond

Despite Army checkpoints on roads and highways and the many metro stations closed off in Caracas, tens of thousands took to the streets throughout Venezuela to protest the decision of the executive branch to arbitrarily stop the collection of signatures for a referendum granted by the Constitution. The referendum could overthrow Nicolas Maduro’s government.

While the opposition, which won a landslide election in December 2015, summoned Venezuelans to “the Storming of Venezuela,” the President and leader of the Chavista Socialist Party (PSUV), toured the Middle East to promote a higher price of oil, and to dispel a default scenario of the state-owned Venezuelan oil company from which the economy depends by 95%.

The toxic institutional gridlock between the three powers seems to be at this time the government’s only option to resist the economic downfall and the humanitarian crisis while staying in power. The Parliament is in the hands of the opposition but is not recognized by the executive power after a ruling by the judiciary on charges of “contempt” (the Supreme Court is overtly pro-Chavista). By postponing the referendum to 2017, the PSUV would maintain Maduro in power until the end of the mandate in 2018. Acknowledging that it is now supported by less than a 20% of the population, and that it would be loser in those elections, the Chavista government and military are trying to buy time to retain power at all costs, even that of an institutional collapse, of international isolation and of a dramatic agony of the economy.

This is the only way for the Chavista establishment to prevent and exposure of the questionable management of oil revenues in the last decade; to try to avoid a default of PDVSA and hence a sovereign one — with all these would entail as to criminal charges for the leaders (Brazil docet ); and lastly, to avoid being held accountable for the ever decreasing oil production at the tune of almost 10% yearly.

The latter is also the reason why China, Venezuela largest creditor with an exposure of around $20 billion according to experts, is beginning to shut off its liquidity and investment tap: the oil it is getting to repay the debt is ever less, and the investment climate is the opposite of ideal.

The country’s report card leaves no doubt about the quality of its economic management: holding the largest oil reserves in the world, Venezuela’s annual inflation skyrocketed to 700%, and could leap to a hard-to-conceive 1500% in 2017 (UBS data). More than 60% of the population lives in poverty, and some are literally starving because of shortages.

Being that it was the president who suspended the referendum , the Parliament convened in a special session on Sunday, and abiding by constitutional provisions established a committee to assess Maduro’s alleged “criminal and political responsibility” when he “broke the constitutional process” of the recall referendum. The Parliament can only judge him politically. Nonetheless it summoned Maduro next Tuesday for a grilling.

The other decision of Parliament, to ask the Organization of the American States to validate Venezuela’s condition of a deteriorating democracy, if accepted would cut off Venezuela from the Latin American concert. Yesterday 12 Latin-American presidents called for a dialog in Venezuela, and the foreign ministers of Mercosur decided on 26 October to assess whether the crisis of democracy in Venezuela justifies its dismissal. Paradoxically, Venezuela’s greatest ally, Cuba, is opening up ever more.

To buy time, the government first convened the Defense Council, which will stay permanently active, and secondly, it is trying to keep the narrative of a “dialogue” between the government and opposition alive.

Returning from the Middle East, Maduro made a stop at the Vatican, which has long expressed its concerns about the population’s hardships in Venezuela. The Pope’s envoy Monsignor Paul Emir Tscherrig arrived in Caracas, but the opposition came to know about his mission from the press, and declined therefore to participate in any negotiations as of now. Conditions for a dialog, they state, are the release of political prisoners, real policies against the crisis and allowing the referendum.

“[The government] is taking advantage of Pope Francis’ and the Nuncio’s good faith to state that nothing is happening here.”

Things are moving fast in the battered country. The opposition Democratic Unity Table (MUD) called a national 12 hours strike on Friday 28 October. The strike will be another opportunity to show its popular support. It is not clear if Maduro will attend the grilling and defense session in the Parliament on 1 November.

The opposition is running against the clock, if it wants the constitutional referendum process to be restored by the government, and an election to be held before 2017. Keeping the pressure on the government, opposition leader and governor of Miranda state, Henrique Capriles, said: “I am speaking loud and clear to you, gentlemen in the government, either you restore the constitutional order or we will march on 3 November onto Miraflores presidential palace to restore our democracy… There is no going back from the march today [“the Storming of Venezuela on 26 October].”

Oddly enough, the government’s agenda coincides with that of the big financials companies holding Venezuelan sovereign bonds. Many of their analysts expect Maduro to remain in power until 2018 and then, unable to win the elections, to establish a dictatorship. “Venezuela Might Be Worse Country in Latin America, But Its Bonds Look Great,” reads a headline.

Maduro took advantage of the Supreme Court ruling declaring null and void all decisions by the Parliament, and approved his version of the 2017 budget increasing spending by 447,6% (and violating 7 articles of the Constitution, according to El Nacional). A portion of it is supposed to be allocated to the Misiones, the social benefits enjoyed mainly by the 20% that supports the Chavista government, and presumably will continue to vote for it.

Fact is that once more, a crippled democracy benefits only minorities — in this case a local one and financial speculators. 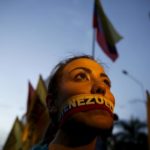 Venezuela: Mediators wanted, from the Vatican the better