What is the truth of the Lugansk massacre?

While Italy was celebrating the anniversary of the republic, dozens of civilians were killed in broad daylight in the central square of Lugansk, Ukraine. Who shot the fire? The net is being waged with explanations of plots and conspiracy, and the fighitng parties have accused each other of the massacre. We try to do a reconstruction, using videos uploaded on the network, satellite images, and geolocated photos.

While Italy was celebrating the anniversary of the republic, dozens of civilians were killed in broad daylight in the central square of Lugansk, Ukraine. Who shot the fire? The net is being waged with explanations of plots and conspiracy, and the fighitng parties have accused each other of the massacre. We try to do a reconstruction, using videos uploaded on the network, satellite images, and geolocated photos.

Let’s start from a fixed point: Ukrainian air force was engaged in these hours in the sky of Lugansk, in response to an attack held by rebels at dawn on the outskirts of the city. There are many videos showing at least an Su-27 and Su-25 aircraft, as well as at least one helicopter. The area of the battle was quite far from the center of Lugansk.

At 14:55 local, however, some sudden explosions hit the central Heroes of the Great Patriotic War square and the nearby headquarter of the local administration (occupied by separatists), killing a yet unknown number of people, including many civilians.

As expected, media outlets of the two fighting parties – Ukrainian army and pro-Russian separatists – immediately accused each other of the massacre. Some explanations even tend to prove that the square has been hit from the ground with a rocket launched by the separatists themselves to blame the government of Kiev. But the evidence on the net available can help to give a more realistic explanation.

Let’s start from the first video, of crucial importance, showing an Su-25 aircraft flying over the city and shooting at least a burst of rockets. Looking at the video below, we can see the aircraft firing a first spray of flares (countermeasures for anti-aircraft, the bright dots that remain behind the plane), then a burst of five rockets (which could be S-13, with which the Su-25 is equipped) and then a second spray of flares.

Matching the video with satellite imagery and geolocated photo (see sequence below), we can locate the place from where it was shot, Kotsiubinskovo street at number 25. We can also find the direction where the camera was pointed, making a roundup from east to west, the direction of flight of the aircraft (also from east to west) and the approximate point when the rockets were fired. This shows that at least one aircraft was flying over the center of Lugansk, and that some shots were fired on the city. The direction is compatible with the square and the struck palace.

A fixed camera pointing at the square took the exact moment of the explosions. The video was immediately used by those who accuse separatists of having caused the massacre, as it shows (at sec. 4’’) a flash in the trees and an explosion on the left side, a fraction of a second later. According to this explanation, it shows that a rocket was fired from the center of the square towards the building. But the video is compatible with the hypothesis of S-13 rockets fired from the top: a burst consists of 5 rockets shots at a distance of 0.15 seconds of each other. The two flash could be two of the 5 rockets (the others are out of the screen). The first looks just like a little burst because it sinks into the ground and is hidden by the trees. The smoke that rises then along the entire line shows that this is a longitudinal burst from above.

The third video reinforces this view. In the minutes immediately following the explosions we can see several craters in the square. They seem to be aligned along the east-west axis (we can get oriented watching the video) and the bullet-holes are facing east and are inclined at about 45 degrees. As if they were just fired from above and from the east, where the Su-25 was flying according to the first video. 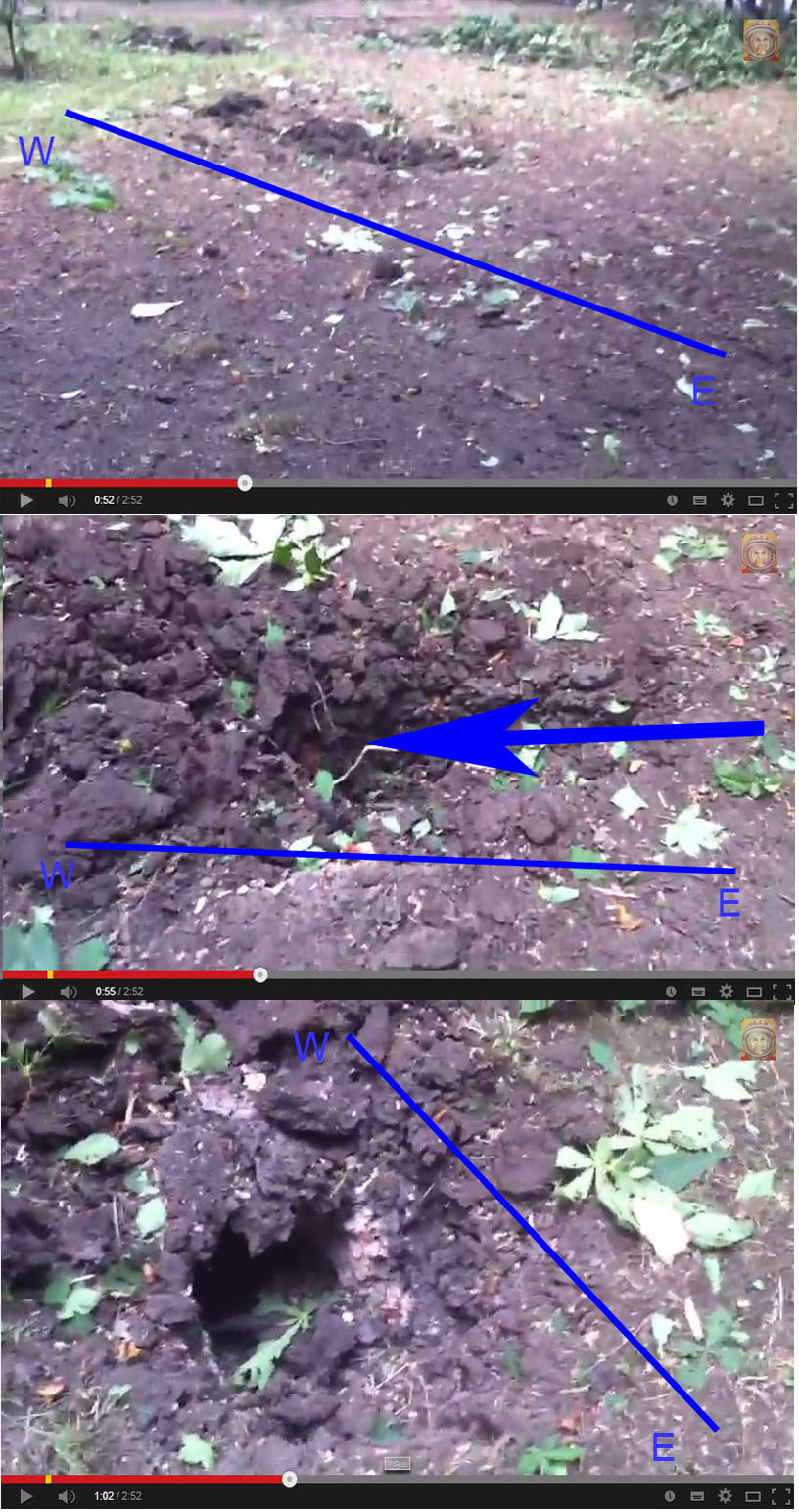 The latest satellite image summarizes everything that we were able to reconstruct here. The camera that has taken the first video is close to the telecommunications tower, which helps us to locate it exactly. The angle of the shot, which spans from east to west, identifies the trajectory of the plane and locates with a good approximation the point where it fires. The direction in which the camera was at that moment, south-southeast, leads straight to the square and the struck building, only a few blocks away.

Unfortunately, the clues we gathered lead us to conclude that most likely was a Ukrainian aviation aircraft to shoot over the area. The local administration building was occupied by separatists, but it is incomprehensible how the command of the anti-terrorist operation carried in the region may have given the order to hit the heart of the city. Moreover, in broad daylight.

Many of the victims are women. On the web there are several graphic videos we didn’t want to post here. Nothing can justify an air attack on a city that – it should be remembered – it is not a war zone, but where its inhabitants continue their everyday life, despite the presence of armed rebels.

Kyiv authorities have denied the airstrike, but it is really hard to give them credit after this analysis. In this blog we have written many times of the disinformation and propaganda led by Russian media on the crisis in Ukraine, but in this case we have seen the opposite. The explanations given by pro-Europeans sites, bloggers and media go against any logic and do not help to uncover the truth.

And the silence of western media is even more unjustifiable. This will be remembered as yet another massacre of the civil war in Ukraine.