The élite vs the burbs

The Yellow Vest protests have highlighted Macron’s frailties. He must work to revive his political programme and get the majority of those who voted for him to back it

The ‘yellow vest’ crisis marks a very particular moment in French political history. Much has been said about the ruptures it reveals, about territorial France now taking up arms against the city, yet setting itself apart from the banlieues. The roundabout blockades and the by now ritual Saturday demonstrations in the middle of towns initially seemed to be a new version of the “jacqueries”, the peasant revolts of old. There has however been a subsequent attempt to capture the nuances of a multifaceted movement, and we have therefore witnessed a concerted effort to understand and rationalise the crisis, by plunging into the sociology of a French population that has a hard time reaching the end of the month, with the modern addition of mobilisation via the social networks. The fact that premonitory warnings signs of this movement had not been perceived, such as for example the discontent triggered by the lowering of the speed limit from 90 km/hr to 80 on provincial roads last July, is representative of the paradigm of a French power completely centred around the main towns and incapable of staying in touch with its inhabitants throughout its vast provincial expanses.

One is therefore forcefully reminded of the issue of the isolation of the elite that sociological investigations have found to be scarcely representative: the French meritocratic selection system currently produces  a high level of social reproduction, with the bitter realisation that often only the sons of those who have a foothold on the rungs of the social establishment can acquire the codes to access society’s peaks. The French education system is a two lane affair. The high school graduates with the best grades all come from the best schools, all located in the main cities, and can access the system of “prépa classes“, the two foundation years after high school, with fearful workloads, which do however allow access to the competitions for the best graduate state institutions for administration (Sciences Po / ENA), engineering (the Ecole Polytechnique for example), and business (business schools such as HEC, EDHEC, etc.) or teaching (the ecole normale supérieure). The rest of the students take short degree courses at universities and institutes  whose more meritorious educational paths are rarely considered on a par with the grandes écoles” system. This entrenched power structure based on an elitist and restricted selection process is one of the more tangible aspects of the divisions within French society, a phenomenon that is also reflected in the language. The competitive selection of an elite, which tends to view itself as a series of castes on different hierarchic levels, based on results produced between the ages of 16 and 22 is undoubtedly a problem, which is further compounded by the absence of social turnover which this highly selective system entails. Since 1968 even the provincial French “école normales” were shut down. These used to enabled deserving adolescent sons of farmers or factory workers to become teachers and embodied the promise of a Republican social elevator open to all.

We are therefore faced with a power structure that has objective difficulties getting in touch with certain sections of society, and this has been the case for several decades. The “gilets jaunes” crisis has highlighted these fractures but it may also be seen as a watershed.

The scarcely organised and representational nature of this movement has driven the government, and President Macron in particular, to build bridges with intermediary figures, who are in a position to mediate with the revolt. And this is where the locally elected, and primarily the mayors, who had been sidelined by vertical power structure put in place by the young president, have come into play. The dialogue now ensuing with the mayors is extremely representative of this new way forward: in the sports centres of Normandy or Occitaine, the president has taken off his jacket and entered the dialectic arena with the locally elected personnel, which has led to a series of critical considerations being levelled at the economy, taxation and democracy. This is as much a change of tack for the Macron presidency, as it is for the Fifth French republic, which has never had to withstand such a profound level of criticism even on methodological grounds. A “major national debate” has been organised in conjunction with a local and virtual consultation that is designed to allow the various complaints and requests to be aired, a way of channelling the “yellow vest” demands within an institutional construct.

This doesn’t meant things have settled down. The Macron presidency is walking a tightrope, exposed to what is almost an endemic capacity for violent mobilisation against the government. But the awareness of the precariousness of the current predicament, succinctly captured by Macron himself in February when he admitted to be “walking on ice”, provides a strong impulse towards change, partly to avoid the chasm into which France appeared to be slipping at the end of 2018, when its entire institutional set up was under threat.

Macron, dragging his ministers along as well as his entire administration, has started to listen to the grievances. He has proven to be a great speaker with great physical resilience, capable of engaging in six hour long debates with local politicians and rebutting the criticisms levelled at the government. Macron also seems to have understood that one has to allow distress to be voices, one cannot and cannot expect to win all disputes thanks to one’s oratory. He is doing one of the hardest things: the outstanding student trained at an elite state school for top administrators, a highly competitive environment where future managers are taught to have the right answer for everything, has had to learn to set aside his instinctive will to win so that he can be believable when listing to loser’s qualms.

At this stage new scenarios in the wake of the “yellow vests” are starting to shape up. The crisis means his approach to the European elections will change. Macron is effectively on the campaign trail, and is somehow intent on using the debating tool to win back consent, a trend that the polls seem to bear out. The focus on international politics has also fallen off. At the time of the more virulent demonstrations, between November and December last year, the French presidency put its international role on the backburner and essentially put a stop to all international travel. The resumption of diplomatic activities came with the signing of the Aachen Treaty in January 2019: the renewal of the historic bilateral French-German treaty raised many eyebrows, even though it has left things pretty much unchanged. This reaction was a further indication of how touchy the European issue is within the country, and this will alter, and could even silence all the grand rhetoric about a European revival that Macron had displayed after his elections. Germany too is weaker on this front, and therefore the French presidency, despite toning down its will to reform Europe, must acknowledge the danger of making Europe’s revival the focus of its political message. This is reminiscent of Sarkozy’s presidency: an open and fruitful relationship with Germany and great attention paid to European institutions but a political programme which put the national interests centre stage.

Since the ‘yellow vest’ crisis, tantamount to a mid-term assessment for the French presidency, Macron is often in the hot seat, which may represent an weird yet powerful propellant for a revival of his political fortunes. He has already weathered the most problematic stage of the crisis. Now he has to find a way of outlining a reform programme that is compatible with some of the instances raised by the provinces, a very tricky yet not impossible task. So Macron, rather than quitting, doubles down? 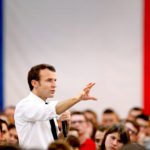 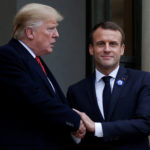 “Ode to Joy” or “La Marseillaise”?