In 2016, two thirds of FDIs come directly from Europe. Turkey has become an important base for the investments of major European companies, in high-value-added and financial services sectors.

Source: Central Bank of the Republic of Turkey

Before the Customs Union, along the period 1990-1995, total annual FDI inflows in Turkey amounted to only 745 million dollars and were growing at an annual rate of 0.4%. Immediately after the entry into force of the Customs Union, in the first 4 years (1996-2000), the average global FDI flows to Turkey was 846 billion dollars, with a growth of 6%. Between 2002 and 2014, the share of the average increase of European FDI flows in Turkey went from 42% to 43%, with a peak of 72% in 2006. The decrease after the peak of 2006 reflects not only the financial crisis of the following years, but also the political instability, which has worsened the perception of the foreign investors in terms of degree of corruption and absence of independence of the judicial system.

The post-2007 evolution of FDI stocks also shows a different behaviour between inward stocks (volatile but significantly growing) and outward stocks (a smooth acceleration in growth). 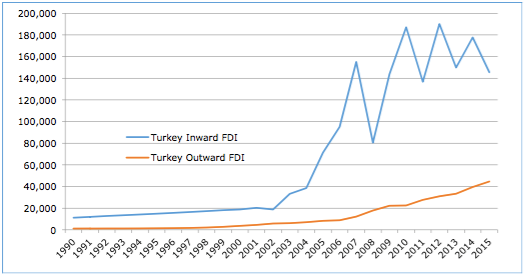 It is worth to analyse in detail the biennium 2014-2015 (1): the graph below (figure n°21) draws a significant difference between European FDIs inflows and outflows. As to imports, they decreased in the biennium from 1.3 to -0.8 billion euros, reaching negative results. Conversely, exports more than doubled for the same period, going from 4 to 10.7 billion euros, data which underline a strong attractiveness of Turkey for European investors.

1. This is the most recent meaningful biennium before the attempted coup, which has altered the trends