China and the coal about-turn

Over the past two decades, China’s economy has largely relied on the key competitive advantage of coal. Coal is abundant within the Chinese national borders, mining and refining processes do not require advanced technologies (high tech) and it has been for a long period less costly than oil and natural gas, the energy resources fuelling most of the modern industrial economies. Today, however, at the beginning of a massive socio-economic transition in China, a country aiming to escape the middle income trap, the Chinese coal paradigm is starting to show signs of weakness.

At the turn of the century, positive outlooks on world economy, and particularly on emerging markets, have stimulated huge investments in the oil and gas sector. The upstream segments have been the main beneficiaries, but also the downstream segments could afford a sustained influx of capital, especially in refining. Over the course of ten years, this massive amount of investment has resulted in a great expansion of conventional production capacity worldwide and in a significant evolution in the refining processes, too often confused with the “Shale Revolution”. The increase in supply, combined with the Great Recession and a slowdown in emerging markets that has frozen demand, has led to sharp falls in commodity prices, particularly for what pertains energy.

In the second half of 2014 oil benchmarks have dropped by an average of 60% and, within few months, natural gas and NLG prices have slumped similarly. Oil and gas prices in the United States have been falling since the past decade due to the development of horizontal drilling and fracking techniques (the actual “Shale Revolution”). This resulted in a significant national oil and gas production expansion. The impact of the “Shale Revolution” on the American domestic oil market has been limited due to the global oil market structure. On the other hand, lacking an infrastructure and legal framework for exports, the implications for natural gas pricing have been dramatic. The Henry Hub (HH) gas price (the benchmark price for North American natural gas) per Million British Thermal Units (MBTU), at the end of 2013 was at an average of $3 to $4, and at the end of 2015 it dropped to $2 to $2.5. 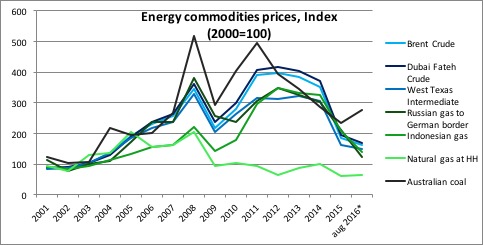 The reasons for this divergence are not simple to summarize. In the last few years some large producers, such as China and India, have been facing growing industrial and electrical overcapacity due to the reduction in global growth, to the inefficiency of their national energy grid and additionally because of the public subsidy policies favouring the energy sector. As a consequence of the pursuit of scale economies and synergies in horizontal mergers, smaller and older mines are closing, affecting global supply.

In China, accounting for more than half of the global coal production and consumption, the economic and efficiency issues are combined with a further push factor, amplifying the output reduction.  Not only coal plants are very polluting, coal mines are too.

Both surface and underground coal mines inject nitrogen, carbon dioxide, argon, neon, krypton, xenon, helium, hydrogen and ozone into the atmosphere. To that, it must be added that diffuse fibrogenic, carginogenic, toxic, radioactive and explosive dusts together with loose coal also critically affect human health and environment.

Under social, political and international growing pressures to reduce pollution, the Chinese government has started to shift from the self-sufficiency paradigm to a more dynamic approach, stressing the spot coal market quotations.

At the same time in the United States, the second largest producer and the third largest consumer of coal worldwide, the implementation of new emissions regulations and the collapse of the natural gas price are causing a significant downsizing in the coalmining sector.

Finally, forecasts on the occurrence of La Nina weather pattern – that manifested itself last time during 2011 and 2012, flooding Australian and Indonesian mines and lastingly affecting coal price worldwide – have periodically splashed coal quotations over the past few years, causing a continuing volatility in coal futures market.

As a consequence of all the aforementioned dynamics, over the last ten years coal and natural gas prices have shown a constant nearing trend.

At the end of 2013 natural gas price per MBTU at HH pegged coal price per MBTU at Qinhuangdao Port, China’s benchmark coal price. Two years later, gas price at HH presented a positive difference from coal price at Qinhuangdao Port of 10/20%, that is to say ranging from $0.26 /0.52 per MBTU or $ 6.12/12.24 per tonne of coal, despite a strong USD appreciation against renminbi in the same time lapse. During the first six months of 2016, the gap has further widened.

Moreover, in recent years massive investments in the gas industry and swirling scientific-technological progresses have steadily increased energy efficiency and reduced the cost of gas power plants, widening the price gap between natural gas and coal in power sector

If coal price overtaking natural gas price could be considered a revolution in the history of Industrialization, it also is very bad news for the Chinese economy.

Cheap workforce and cheap energy have been for a long time the two pillars of the Chinese development mix.

Chinese economy heavily relies on coal for electricity generation and as industrial fuel, while its competitors have gradually switched to gas, even if coal maintains its importance especially in the steel and electrical sectors.

Now, while rising minimum and average wages are eroding China’s international competitiveness and the domestic consumption struggles to take off – cutting the structural counterweight to exportations slowdown and FDI inward reduction – the increase in energy cost seems to have the potential to make the Chinese socio-economic transition harder.

China, in fact, is suddenly facing the crossfire competition of South-Eastern and South-Western neighbors in lower added value and labor-intensive industrial sectors, and from Western economies, especially the American, in energy intensive segments.

Notoriously, in labor-intensive sectors relocation processes are faster than in energy-intensive segments. Therefore it is not surprising that, at the moment, business offshoring in China mainly regards textile and base electronics industries.

However, the manufacturing sector and the steel industry in the US and Europe are already showing signs of responsiveness, triggering a countdown to the recovery of Chinese economy.

Wages’ increase, improving working conditions, the new welfare programs, the recent progress in environmental legislation and the social subsidy policies are in fact all big government bets on the success of the socio-economic transition.

The price that China would have to pay if these bets prove to be hazardous could be very hard.