Domiz, when a refugee camp becomes an ideal life

Seventy thousand people, three families per tent, children who attend lessons inside torrid containers, everyday life that tries to set up again its own space through the obstinate pursuit of daily habits: this is the life in Domiz, the biggest camp for Syrian refugees in North Iraq, Kurdistan Regional Government. 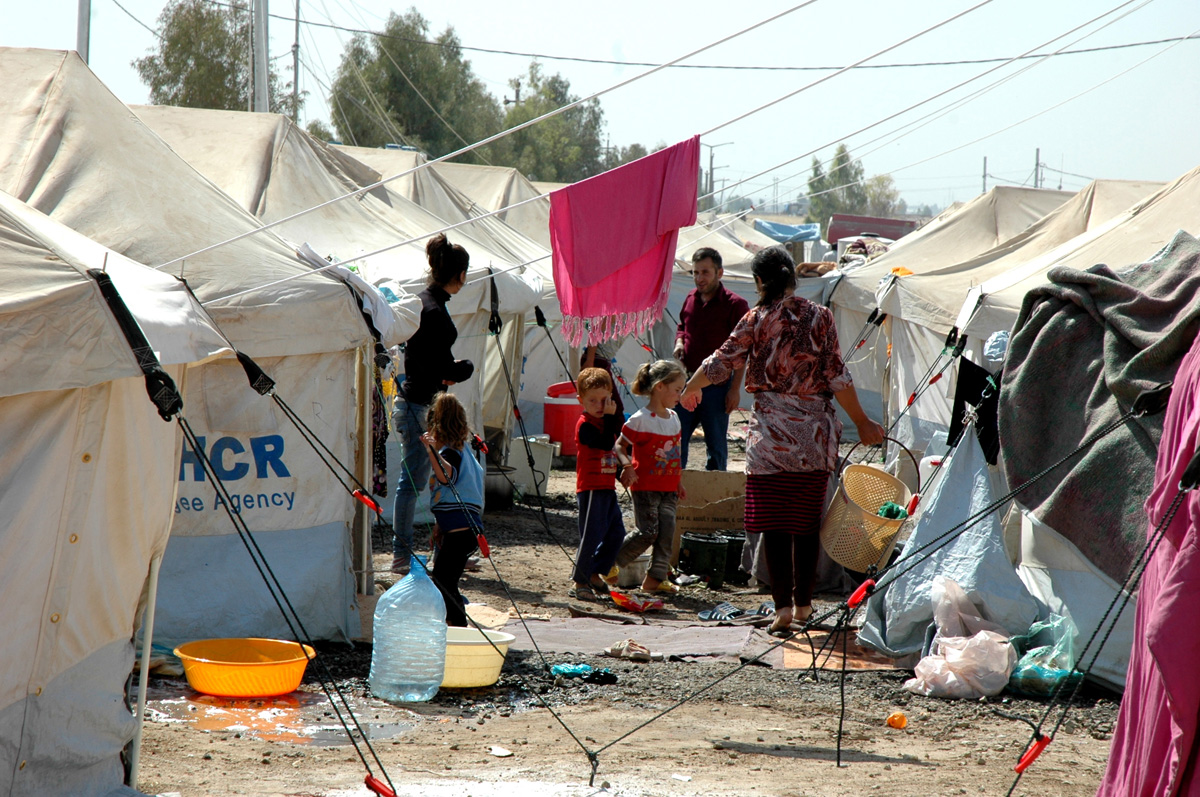 About 80% of the refugees are Syrian Kurds, who mainly come from Damascus and Aleppo, cities which are not controlled by the Kurdish militias, as instead is the Rojava area (Syrian Kurdistan).  Since the start of the uprising in 2011, Syrian Kurds haven’t been subjected to heavy repression measures by Bashar al-Asad’s regime and are now benefiting from a truce with the national army. Since last autumn, however, Kurdish militias reported several clashes with branches of the Free Syrian Army, and lately are harshly fighting against Islamic militias, like Al Nusra. On the background, international interests are growing, as the different actors involved on the Syrian battlefield.

In Domiz, refugees can easily go out and exit the camp, just by showing their UN passes to the Iraqi-Kurdish army. Here, like in the others Iraqi refugee camps, there are many flags of the Kurdistan Democratic Party (KDP) and its leader, Mesud Barzani, president of the Iraqi Kurdistan Region.

At the entrance the vortex of sand is lifted both by the hot wind and the taxis that are there to bring the refugees into the cities. Many of them found odd jobs in Iraqi Kurdistan.

Those who escaped from Syria more than a year ago have become the privileged ones, as now they don’t have just a tent for their space. Indeed there are small rooms in brick and even some little shops full of dust, but also beach-umbrellas under which there are trunks with cigarettes, money exchange and still scattered fragments of normality.

<<This area could receive twenty-five thousand people, but now there are seventy thousand. It’s hard to keep score, because the refugees are free, so they can easily enter and go out>>.

Iraqi Kurds that help Syrian Kurds could represent a possibility for the Kurdistan Federation, but now this opportunity is far and maybe not a desire for all. The Syrian people coming to Domiz and to other Iraqi camps (in all the region there are six camps and almost 300 000 refugees) can take assistance, but they can’t achieve any citizenship.

The manager of this camp, that belongs to Kurdistan Regional Government, complains about the International Community.

<<I don’t know the political reasons, but for example Saudi Arabia gives an economical support to the camps that are in Turkey and it ignores those that are in Kurdistan. We sustain our activity through our self-government, then thanks to solidarity of our population (they offer also job to the refugees), finally very limited resources come from the United Nations>>.

This kind of generosity might come in two different ways. The first one is historical, because the Kurdish region helps the Syrian people following a feeling of brotherhood. During the repression by Saddam Hussein, when the Kurds in Iraq wanted to escape, they suffered from the closure of borders in Iran, so now they would do something different. The second way is the result of a political calculation, because the president of Kurdistan Regional Government, Barzani, would like to extend his influence on Syria, inside the Kurdish area, where he is not present at the moment.

Only time could evaluate this geopolitical castle, right now an incredible human carpet is here. These people must stay in row to do everything, even children willing to climb a net like a distraction have to wait. There is a big military tent used as hall of an hospital. Some people are happy and others are not satisfied. I fill my ears up with stories of killings; people escaped; disappearances: refugees well dressed and other almost naked, operators with different uniforms (Medecins Sans Frontieres, Unicef, etc…)

<<In Syria it’s impossible to know from whom you have to evade. I heard the gunshot fire against me because I’m Syrian, I’m Kurd, I’m a human being. Islamic extremists, liberation army, smugglers, I don’t know how I can call them, but I know that they took my house. I want to go back to Syria once it’s free>>.

The voice of a man getting closer. He is reassured from the tents of this camp, from the food in dose, from the ice they receive, because all this is far from the violence that he left in Syria. He found here a serenity that is a lump, because the resignation of a precarious existence is a miracle and it makes the life in Domiz an ideal life.