Eat or be eaten. Lapsing GMO patents usher in age of open-source biotechnology

March 1, 2015 is a big day. Monsanto’s glyphosate-resistant soybean seeds will go off patent, meaning that anybody can plant them. Wasting no time, the University of Arkansas has rolled out UA5414RR, a soybean variety with Monsanto’s legendary Roundup Ready technology built into, on offer without the technology fee attached to the first big commercial GMO, or genetically-modified organism. Is an age of open-source biotechnology about to begin? 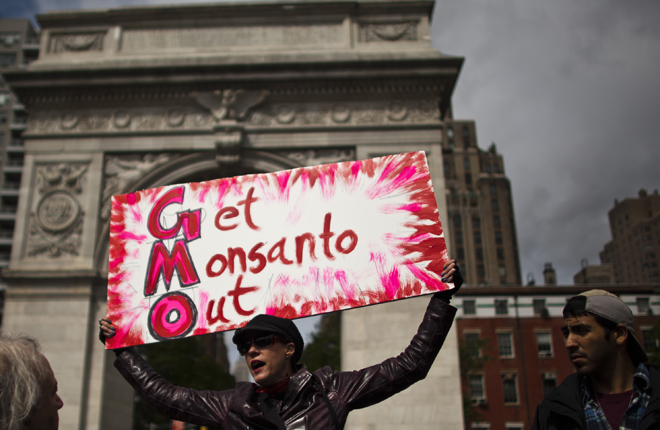 More GMO patents will lapse, and more products will come to the public market. The process may be as revolutionary as when a Venetian Protestant told Galileo about a new Dutch invention known as the telescope.

For one thing, it puts paid to those who worry that Monsanto is out to “monopolize the food system,” as claimed by anti-GMO crusader Vandana Shiva. Indeed, questions about patents on seeds – which go back to the 1930s – may turn away from multinationals and focus on Bolivia, which may be granting Mother Earth constitutional rights but has no plans to share its quinoa genomes with researchers seeking to boost food security elsewhere.

A spate of rhetorical pivots suggest regime change is on the way. Frederick Kaufman, author of the fabulously-titled “Bet the Farm: How Food Stopped Being Food” has already suggested that “the time has come to separate the dancer from the dance” and urging foodies and organic activists to back science now that it’s no longer owned exclusively by huge companies.

Biotechnology isn’t done cheap – developing a plant trait typically costs $136 million and requires 13 years before commercialization – but typically new industries push down the price of innovation,, and the cost of gene sequencing has dropped dramatically over the last 20 years, far faster in fact than the cost of computer ever dropped.

So we’ll probably see a lot more and varied GM foods on the shelves. That doesn’t mean we’ll be force-fed fishy tomatoes; that experiment didn’t get out of the laboratory. More likely there’ll be products like the FlavR Savr tomato, which stays firmer for longer, and the brand new Arctic apple, which stripped away a gene in order to prevent browning.

While images of kids down by the river doing weird experiments with genetics do hold some appeal, they’ll probably be trying to resurrect dinosaurs, not just fortified variants of the cassava, a popular tuber around Africa – to which it is not native. Monsanto’s goal was to make seeds whose plants resisted the company’s own herbicide, but other traits could be geared to drought or saline soils. Researchers are already keying in on so-called “orphan crops” or landrace cultivars of major grains with desirable traits to boost food and nutritional security.

Think of a full-spectrum global version of what John Chapman, aka Appleseed, did by spreading apple seeds around the riotous American frontier in the early 1800s.

The end of the first GMO patent may also lead to changes in public awareness. For example, most GMO seeds can can in fact be reproduced in the fields; it’s not nature that prevents that, but producers who require clients not to do that.

The latter point may roil some of today’s quirky sensitivities, as one deep aversion to GMOs is linked to the sense that humans are violating, not just manipulating, the natural order. The European Union has a dim view on GMOs but has no problem with mutagenesis, a process whereby plants are exposed to atomic radiation, their genes damaged and scrambled in multi-year laboratory experiments, all in the quest for new and useful mutations. The latter method is behind a lot of what we eat directly – and can be labelled organic – whereas most GMO crops are for livestock feed or industrial use.

As noted, transgenic crops face regulatory hurdles, unlike their mutageneticized cousins, even though the former are intentionally produced while the latter are randomized. Toss in the now-easier process of genetic “editing” and you can see it’s all destined to get very fuzzy.

Case in point: The U.S. Department of Agriculture has ruled that if a gene-edited plant cannot be distinguished from a naturally-occurring mutation, it’s not a GMO. This puts some pressure on the EU as it will be hard to detect if a crop is the product of gene editing. And moreover, if the EU chooses a more stringent definition, then the regulatory cost of developing new biotech crops will soar, with the ironic outcome being that open-source biotech will wither on the vine and only the truly large players will be left in the game.

As it happens, companies like Monsanto, which began in 1901 making artificial sweeteners and did a stint in the 1970s as a major producer of LED lighting, are already shifting gears.

The kerfuffle over GMOs is fading away. Data, big data, is Monsanto’s new thing.

Noting that knowledge gaps, particularly about changing climate trends, was a major cause for lost profits, Monsanto recently paid nearly $1 billion for Climate Corporation, an outfit with ponderous data on the weather as it once sold crop insurance to farmers and now has an app that maps – with highly granular precision — soil and climate data in a bid to help farmers make decisions like when and what to plant and how much water and fertilizer to use. It will now be integrated with Monsanto’s data base on seeds. The combo already has 3 million customers in India and plans a big push into Africa’s vast world of cellphone-owning smallholders.

In a way, GMOs were as much about data as about actual products, and appear to be folded into the so-called sharing economy. DNA is an information code, after all, and the contracts biotech farmers signed with producers generally require them to hand over significant information. Interestingly, the sector is now busy hammering out the ramifactions of lapsing patents, and one of the key issues is “stewardship,” an iconic term in any ecologist’s lexicon.

In that light, it’s worth recalling a paean to biodiversity, bemoaning the practice of grafting apple trees to bear standardized fruit, was written in 1862 by Henry David Thoreau, one of the early nature lovers and a champion of civil disobedience: “They who are at work abroad are not cold, but rather it is they who sit shivering in houses. As with temperatures, so with flavors.”
@AldoCiummo