Even indian village ponds are drained by elite capture

It turns out the rich really do get richer. While many pundits and policy makers devote time to quibbling with the thesis of Thomas Piketty, who claims that capitalism does have an internal law tending to plutocracy, news from India suggests that smart money should be placed on the readers who made the French economist’s “Capital in the 21st Century” a best seller. 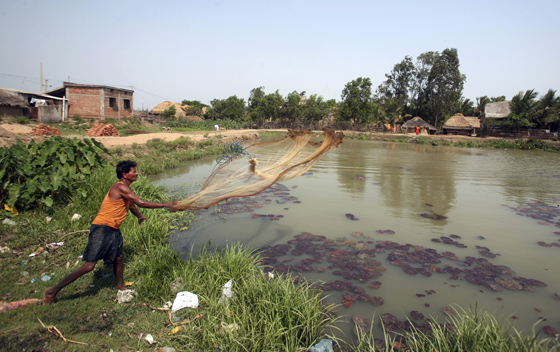 Imagine you are in the Indo-Gangetic Basin, the South Asian heartland that is home to hundreds of millions of poor villages. For centuries, fishing carried a cultural stigma and was a task done by the lowest castes.

Along comes progress and a government keen to boost food production and jobs for the growing population. It devotes resources to turning small-scale village-pond subsistence fishing into a dynamo. Fish production increases sixfold and India’s inland fisheries now export almost a third of their catch.

Great news for the smallholders who make up around 75% of this booming industry built up from scratch in the era of Indian independence, right?

Nope. Just as only wealthy financiers could tap the ultra-cheap liquidity provided by western central banks, it turns out that amid all that Indian bounty  it is very hard for the peasant to compete with the bigwigs of local commerce, despite the traditional stigma of the trade.

How is the little guy kept at bay in this case?

A long-term study just published in Water International found that the price of pond leases has risen by a multiple of 100 in 15 years. Such increases mean that operating ponds requires credit, both to secure user rights and invest in technological setups.

In a classic example of “elite capture,” only wealthier folks with access to finance end up benefiting from India’s fish ponds, according to Tushaar Shah, the author of the study.

In short, “capital, technology and muscle power have determined who benefits,” Shah and his co-author Rajnarayan Indu say.

So widespread is this that poorer farmers know the deck is stacked against them and often accept deals with wealthier neighbors whereby they apply for pond-lease subsidies and then hand over the package in exchange for 10% of eventual profits. That’s the way around a third of India’s village ponds are managed, according to the study, which spanned 10 states.

Humbler fisherfolk find it hard to stand up for their rights in an industry where a cheap bottle of insecticide can quickly kill fish worth 10,000 times more.

“Revenge poaching” is a major problem. So is regular poaching. Paying pond guards is expensive and the job is dangerous. Interestingly, the most effective way to protect oneself against that is to gift leading community members and potentially threatening rivals with fish. The problem with that is that can quickly consume half one’s annual catch.

Another common outcome is basically a quasi-feudalist racket whereby the small fisher ends up being forced to supply larger rivals – the ubiquitous anthropological figures known as “strong men”- with cheap fingerlings.

Yet another solution is to harvest the fish when they are still small and hence harder to steal. That of course is less productive and brings pond fishing back to its past association with stigma and poverty.