Germany: a clear a clear electoral mandate, but no government

Autumn leaves whirled around the Reichstag building in Berlin on 22 October, when the newly elected Bundestag, Germany’s lower house of parliament, convened for its first session. Chancellor Angela Merkel, beginning her third term, also met her deadline for signing up a coalition partner. 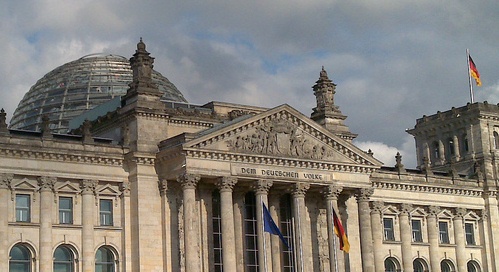 Last September, Merkel led the Christian-democrats (CDU-CSU) to their best general election result since reunification in 1990, but her success also provoked a dramatic change in the parliamentary power structure. Under the Bundestag’s glass dome, half of the plenary chamber has now been taken over by the CDU-CSU. On the opposite side sits comfortably spread the centre-left SPD, while the Greens are wedged-in between the two of them. Left-wing Linke occupies the blue seats far out to the left.

Having come-in just five seats short of an absolute majority, and with their traditional partner FDP out of the parliament, the Union’s leadership has over the last few weeks held intense preliminary talks with both the social-democrats and the ecologists.

Exploratory talks with Grünen bogged down on Tuesday last week, leaving the Chancellor with little option but to align herself with the Social Democrats, the third such coalition in post-war Germany.

This had been Merkel’s preferred option from the outset because of the comfortable majority she would enjoy in both the lower and the upper houses of parliament. But the resulting mega-coalition of more than 500 representatives corners the opposition as never before. The Left party and the Greens will be have between them less than the 25 per cent of deputies needed to be able to convene the Bundestag or to seek to have a law reviewed by the Constitutional Court.

In a fashion which recalled the first day of a new school year Merkel moved around the big Reichstag hall from the CDU half of the semicircle to the SPD seats, under the mirrored cone that directs the sunlight into the building. There she stopped briefly to confer with Sigmar Gabriel , SPD leader , with Frank Walter Steinmeier, the SPD chairman, Peer Steinbrück, her opponent in the September elections, and Andrea Nahles, SPD General Secretary, all of whom recommended that the party entered formal coalition talks with CDU.

Should these fail, Germany would have had to hold new elections, which the Union would likely win outright, according to the latest Forsa poll. Indignation caused by donations from BMW to Merkel’s party to the tune of 690,000 euros, donations which almost perfectly coincided with some successful German automaker lobbying in Brussels — in the matter of the new caps to CO2 levels for carmakers in the EU — did nothing to change this picture.

On the domestic front, the bottom line is that the current strength of the German economy allows the government to beef up domestic spending, and fulfil some of the parties’ campaign promises. Quite paradoxically, this would move CDU’s budget hawks away from their debt reduction goal using the 2015 federal budget surpluses. “CDU, CSU and SPD are at risk of being dazzled by good forecasts, and of financing their expensive election promises with surpluses that will not come about,” the Green’s budget spokesperson told FAZ.

Against this backdrop, some compromises are beginning to take shape: in exchange for the introduction of a minimum hourly wage of 8.5 euros, the social-democrats could ease up on their request to hike taxes to boost investments in education and infrastructure. There is also scope to iron out some energy related issues, even quicker — read “with higher coal ratios” — than the environmentalist and the Left parties would advocate. Dealing with the asylum seeker issue could prove a more laborious task, as could the allocation of cabinet posts.

The SPD wants the post of labour minister. More critical is the finance portfolio that Merkel wants to keep in the hands of veteran Wolfgang Schäuble — unless he became Foreign Minister, in which case, SPD’s Jörg Asmussen, currently a member the ECB’s executive board, could get this key portfolio.

Herein lies the relevance of this bargain for Europe, and hence for countries still trapped within the euro crisis. No other German chancellor before Merkel has ever had so much influence on Europe.

In other words, a softer stance on austerity for the ailing countries could well be the result of Merkel’s concessions to the social-democrats, in exchange for their support for more proactive and authoritative economic governance of the EU, involving things like more power to control the 28 member EU’s national budgets, as well as their public borrowing. The implementation of structural reforms to boost competitiveness could be achieved through Ecofin, the finance ministers’ informal meetings, by means of Protocol 14 of the Lisbon Treaty. Here, an SPD finance minister could help find room for a compromise with his fellow party member Martin Schulz, the president of the European Parliament, who already seems to have warned Merkel that he will not endorse changes in EU treaties.

Leaving such distinctions aside, this new grand coalition could pave the way towards a European monetary union with a new foundation stone. But the SPD needs to be very aware that, as economist Stefan Collignon writes quoting a friend, Merkel is like “a croupier in a casino: she makes no bets on her own, (…) but takes money from the other players.” As during the last Grosse Koalition, she could once more reap the benefits of the SPD ministers’ contributions, something they will likely be giving a lot of thought to before the new government is in place, a development that could hence be postponed till as late as January.