It’s a GroKo! But nobody really likes it, nor will the rest of Europe

While Europe welcomed the signing of a Grand Coalition agreement in Germany, among Germans the debate is as heated as ever. 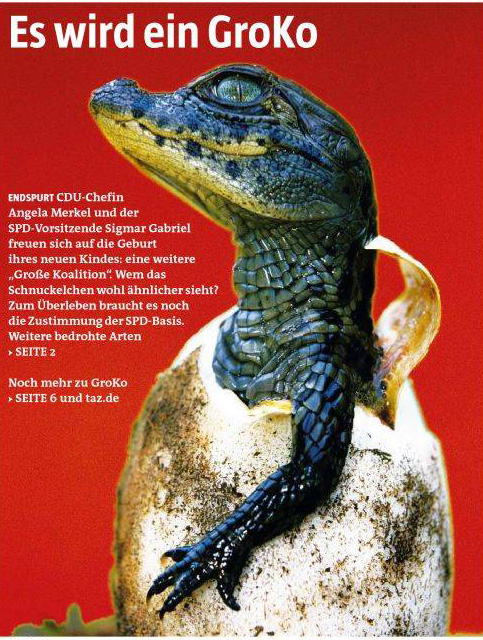 It took five weeks and a long final night of tough talks to hammer out a coalition agreement between the Social-Democratic Party (SPD) and the Christian Democratic Union (CDU) and its Bavarian ally (CSU). Nonetheless, the future government of the strongest economy in Europe and the fourth in the world has yet to be set up: for the nonce it’s just a “GroKo” — a neo-acronym that recalls in German the word “crocodile” — that is still not standing on its own feet because it must first be approved by the SPD rank and file.

It is the first time that the Social Democrats apply the rules of internal democracy in such a strict way. According to the latest Forsa poll, 78% of SPD voters are in favour of the proposed coalition agreement. But “they’ll be casting a realistic vote, because the SPD waived a lot in the agreement” is one of the comments most frequently heard in a gathering of centre-left voters — Social Democrats and Greens — in a small town near Bonn. “Should new elections be called, Angela Merkel would gain an absolute majority, and this would be worse, because she is the best at appropriating the themes of SPD and Greens, as she did with the energy shift. There is a certain fear among the rank and file,” says Rudolf Bayer, a recently retired official.

Like a big black piranha trying to eat a small red goldfish, that’s how the CDU was depicted in a leaflet distributed before the arrival of Sigmar Gabriel, the SPD’s secretary, at a meeting in the town of Hofheim. The leadership of the SPD, which many fare SPD voters fear is likely to be devoured again by Merkel, launched a frenzy campaign to obtain the approval of the contract by 15 December by winning 32 regional elections.

Many conservatives plainly oppose the new mechanism of internal democracy — Votum, shared decisions, as it’s called. A constitutional law expert stated that, in this way, the 475,000 members of SPD have more power over the destinies of German democracy than the very German citizens. The question was asked on live TV to Sigmar Gabriel while he was at the meeting in Hofsheim by a ZDF journalist. The way she put it, with a tinge of controversy, and the bickering that ensued, and that ended with Gabriel saying “Stop this nonsense” just goes to show how animated the political scene is.

While in the conservative camp many argue that there is no one single item in the contract that the SPD didn’t take home — retirement at 63 years in some cases, a women’s quota of 50% in the new government, dual citizenship for resident foreigners, minimum wage — some social-democrat voters, who now have de facto the fate of the future government in their hands, consider these ugly compromises.

Such is the case of dual citizenship that should have been extended to all foreign residents who prove to be good German citizens, and not only those born in the country, according to SPD’s integration official, Aydan Özoguz, who is of Turkish origin. Or that of a minimum wage of 8.5 euros per hour, which will come into force only in 2015. Marco Bülow, MP for Dortmund, who will vote “No”, remarks that the agreement voids the so-called “energy shift”, and perpetuates the abuse of labour contracts that violate the rights of workers.

Some scholars claim that the agreement will deepen even more the gap between rich and poor that began widening with the reforms initiated by Chancellor Schröder, which favoured the rich and corporations by forcing the middle class to pay higher taxes in proportion. The Conservatives, vice versa, fear that the agreement will decree the end of those “virtuous reforms.”

But since the “black-red” coalition agreement is likely to be passed, two other aspects of primary importance must still be unravelled. The first one is its cost: 23 billion euro said the current and likely next finance minister, Wolfgang Schäuble (CDU), but “at least twice that sum” according to newspaper FAZ.

The second, which is related to the former, is Europe. The pro-Europeans were left high and dry. The SPD, said political analyst Carsten Nickel of Teneo Intelligence to CNBC, realized that deviating much from Merkel’s European policies is not rewarding. In fact, the agreement does not mention any debt mutualisation steps and, indeed, introduces binding “reform contracts” in exchange for aid packages, to guarantee that pro-competitiveness reforms are implemented.

But can Germany force other Europe countries into binding agreements, while increasing at the same time its own debt? Although the SPD promised not to raise taxes, “it is not inconceivable that we will have to do that,” said Andrea Nahles, General Secretary of SPD, because “increasing our debt would be worse.”

The coalition agreement that some call a “stew” and others a “GroKo” will pass, but is not meeting anyone’s expectations.