The approach Italy decides to take on the question of Greece is about to become very important. The issue is not really about tweaking borrowing costs lower for Athens or extending sovereign bond maturities even further out. 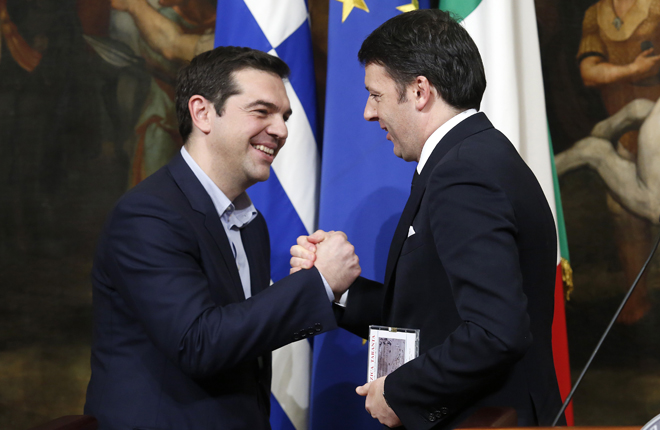 With Syriza at the helm, the European Union now has – possibly for the first time since the euro was launched – a member state with a government that has strong explicit policy ideas on macroeconomic matters.

Until now, it’s been more or less about muddling along with a bit of Maastricht fiscal rules, a bit of Basel banking regulations, and sporadic forex interventions by the ECB. Sure, there are policy issues at stake, most notably Germany’s ordoliberalism, which critics see as half-baked mercantilism while others see as a good-faith effort to make sure that promises – especially to the country’s pensioners – are kept. But the late nights in Brussels have been about mutualizing Eurobonds or winkingly allowing a fiscal wiggle to a country in need.

That murky rag-bag of rules gave Greece some debt-servicing relief but forced Athens to pledge to run a sizable primary budget surplus more or less forever. Mario Monti may have kept the troika out of Rome but more or less by promising the same.

What’s odd is that Italy has been running primary surpluses for a generation, but its public debt ratio has only risen. One reason is that, with Germanic tenacity, Rome is honouring the payout side of the domestic social contract, which is making sure that certain well-heeled insider constituencies can milk the system.

Assuming that Germany will ignore its 2011 pledge at the G20 conference in Cannes and become Europe’s consumer of last resort, the rules of the euro require countries in a balance-of-payments fix to carry out internal rather than currency devaluation.

This is remarkably explicit. The all-European troika’s Second Economic Adjustment Programme for Greece, for example, required minimum wage levels in the country to be reduced by 22%, but by 32% for youth. That is not a typo: Greek youth – who even before the program were twice as likely to work evening hours and on weekends than the EU average – were singled out to carry a heavier load.

What’s quirky – as noted by Anastasia Poulou, a PhD candidate at Heidelberg University writing in the German Law Journal – is that such a differentiated approach is illegal according to European statutes, which the Commission is supposed to enforce.

As noted, Italy retained its sovereignty but pledged to engage in internal devaluation on its own. It has chosen to do so by worsening the conditions for youth labor – via contract tenure, unemployment risk and most recently higher taxes – rather than engaging in the across-the-board sacrifices Germans made in their own post-unification reforms a decade ago.

As the economic recession drags on, the cost of policy choices such as making sure Italians born in the postwar receive unfunded state pensions paid for by the dwindling ranks of the actively employed are becoming even more intense than in recent cases where Italy’s Constitutional Court appeared to agree that internal devaluation can’t involve fiddling with acquired rights.

The pension body for lawyers, for example, is proposing that all members pay a minimum contribution, even those that earn small salaries, which has typically been for a long time in Italy’s professions and is now made even tougher by the crisis. In practical terms this means paying around EUR3500 a year no matter what, even if one’s income is lower than that. Refusal entails losing one’s professional license.

The list of iniquities goes on. All in all, the number of 16-25 year-olds working in Italy has declined by 1.6 million since 2007, despite lower salaries and the proliferation of “precarious” contracts on offer for that age cohort. Meanwhile, there was a 1.1 million increase in the number of Italians aged 55 to 65 with a job.

Italian pundits tend to approve of this. One reason is their own age. Another is that the 2012 pension reform raised the retirement age, so people have to put in more years.

What’s remarkable is that youth unemployment is allowed to soar even as business leaders shiver in fear at using new liberal layoff laws for their older and more expensive staff. The effect is ineluctably calamitous on unit labor costs, the ECB’s preferred indicator of productivity and competitiveness.

Now, however, with the ECB joining the global move to push down longer-term interest rates, those on the receiving end of Italy’s assymetrical adjustment face a new challenge: the cost of their eventual retirement is soaring.

It’s often overlooked but lower interest rates on bonds mean the bonds’ price is rising. For Rome’s state coffers, that means the EUR2.1 trillion in sovereign debt is getting heavier, while for savers, it means it’s more expensive to buy yield. the effect has raised the estimated cost of future lifetime retirement income for a 55-year-old by a third – in just one year! – according to the chief retirement strategist at Blackrock, the world’s largest asset manager.

Naturally the price of saving products – or obligatory contributions – paid for now in hopes of retirement later are not included in the consumer price index, and pundits brush up on how to talk about deflation.

Anyway, it’s intuitive that saving more will drive more retailers, restaurants and their employers out of business, destroying jobs, shrinking the economy and making even lower interest rates necessary.

Syriza’s argument in Greece is that this is a crazy self-defeating policy path. For the record, Prime Minister Alexis Tsipras also tirelessly claims he is not just asking for debt relief from the rest of Europe but will overhaul iniquities on the home front.

Italian Prime Minister Matteo Renzi’s support will matter greatly for Greece – and be of more than passing interest for Italians.