Monetary Inspiration from Naples for the ECB

The European Central Bank’s Governing Councilheld its October meeting in Naples, making it worthwhile to consider the city’s unusual contributions to monetary policy in the past. 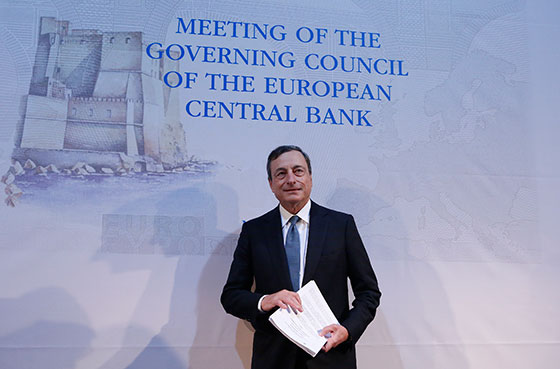 ECB President Mario Draghi has strongly hinted that he is about to unleash unconventional policies, perhaps even a variant of the quantitative easing the Federal Reserve used to buy up Treasury bonds in the United States.

One problem for the ECB has been that its efforts to pump money into the banking and financial system have so far hinged on taking securitized bonds – linked to underlying assets and cash flows – but that it is precisely this form of finance that is relatively undeveloped in Europe’s stressed-out southern regions, including Italy, where short-term bank loans have long been the norm.

As visiting journalists hastened to report, Naples is a city where organized crime appears rampant, the underground economy is large, locals line up to witness recurring church miracles, and where today the mix of unemployment and deflation is worse than Greece.

It was also home to Lorenzo de Tonti, a banker who plied his trade around Europe in the late 17th century and had much to do with the development of public finance at a time when centralized states were consolidating.

His invention – although some say he really expanded on a historical practice in highly-feudal Naples – was the tontine, basically a form of annuity for investors, but also of funding for governments. Fittingly, it has a lottery-type component, not unlike today’s social security schemes, since contributions are mandatory but nobody knows exactly how long they will live.

Tontines were issued by governments and sold to subscribers who in exchange would receive interest payments for life. Subscribers were usually wealthy extended families who would choose their youngest trusted member to be the recipient. When that person passed away, so did the tontine.

Note that in this scheme the original capital is never paid back.

One of the thorniest issues in the euro area is that many jurists interpret sovereign bonds, or public debt, as something that should be reduced, meaning even the capital should be paid back. There are few examples of this happening in the past, as instead economies grew and public debt shrank as a share of the total economy but not in absolute terms.

One useful attribute of the tontine, then, is that it explicitly assumes there will be no payback. In a sense it is a form of national equity, wherein investors put up capital which then – in theory – generates profits to be shared out. If capital can’t be deployed in that way, then the problem is not really a monetary one.

Lorenzo di Tonti successfully marketed this scheme to France and the Netherlands. England tried but with less success, perhaps because its earlier parliamentary reforms had already led to the creation of a credible central bank.

Tontines definitely have a Neapolitan flavor. They are in wide use, under their original name, in West Africa, where commercial banks are reluctant to extend credit to small businesses – more or less Italy’s problem today.

While tontines themselves faded away, their underlying concept contributed much to the way modern life insurance policies are designed.

Still, Naples may not be the place to launch a euro-tontine. After all, di Tonti himself eventually had to flee the city. His children became French, and one founded the city of Detroit.