On saving the butterfly, or at least the euro

The fate of the Monarch butterfly may offer insights into the fate of the euro and the global monetary system, as both have undergone dramatic evolution in the past 20 years. As its last act in 2014, the U.S. Fish and Wildlife Service announced that it is considering declaring the Monarch Butterfly an endangered species. 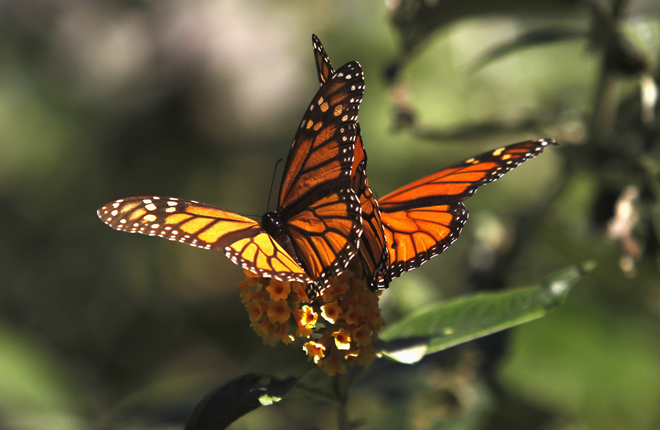 Population of the orange-and-black Monarch, which typically flies more than 2,500kilometers a year to enjoy winter in Mexico and summer on the Canadian tundra, has dropped by 97%.

The usual explanation for the demographic collapse is that pesticides have killed off Milkweed plants, which are the sole food and habitat of the caterpillars that turn into Monarchs. Indeed, prairie grasslands have taken a deeper hit, as 98% of them have ceded ground to the corn belt.

But people like the monarch for its iconic reminder of seasonal rhythms, and so gardeners around North America have taken to planting milkweed in hopes of providing themwaystations.

But a recent study suggests all that civic effort is harmful. It turns out that the butterfly brigade are planting a kind of milkweed that turns migratory butterflies into sedentary ones. Typically, milkweed types wilt, effectively spurring the butterflies to keep moving along their migratory circuit. But the kind being planted – the kind whose seeds are most commercially available to the animal’s champions – is a tropical variant that keeps producing foliage and flowers well into the autumn and even into the winter.

Just as hunting peoples tend to be more robust than agricultural ones – skeletons of people living in the old Roman Empire are notably shorter than those of the barbarians living just beyond the fringe –so butterflies that don’t fly longer get pudgy. They are also more vulnerable to a parasite that worms its way inside and hijacks nutrient flows, shortening butterflies’ bodies and lifespans and actually deforming their wings, making it impossible for them ever to revert to their migratory passions.

Interestingly the sedentary butterflies tend to have faster breeding cycles and higher larval density. In a way the idea that evolution amounts to “survival of the fittest” is stood on its head. Something similar to the Monarch’s American destiny is the European fate of the Spanish white stork, which now skips its tiring passage to Africa and just hangs out near land-fills eating trash all winter.

So, um, the global monetary system.Andy Haldane of the Bank of England has suggested on several occasions that policy makers study biology and ecology to learn how to promote financial stability. Letting a forest fire burn – um, letting banks collapse – might lead to less overall damage than stomping out fires immediately, as bankers would presumably approach risk differently if they understood their survival was at stake.

Instead, policy makers have flooded banks with liquidity, little of which has turned into loans. Likewise, the nice folks in southern U.S. states planting allthat milkweed may be turning the Monarch into a zombie. People saving euros may be doing the same to Europe’s monetary union.

That was the unintended upshot of Italian Prime Minister Matteo Renzi’s recent statement that the country’s long recession is ironically making people richer. His claim was based on data showing Italian households have increased their savings rate, and didn’t consider that this reflected terror of the future, accelerated shop closures and exacerbated the drought of real capital in the euro-zone’s third-largest economy – all of which led to capital losses four times larger than the increased savings.

So are people stupid?

To avoid self-incrimination, this writer won’t directly tackle that question. Suffice it to say that we have created some stupid systems. We killed bison and ripped up prairie to grow corn we can feed to cows that rarely walk, and in doing so are pushing a key pollinator to the brink of extinction. We go to seed stores to try to stop this and the only type on offer worsens the problem. We issue government bonds to provide a risk-free benchmark on which to build robust credit-driven economic expansions, and then we demand that public debt be reduced while at the same time applauding creditors for their thrift.

Solving the world’s problems is evidently complex work. With the Monarch, though, it’s reasonable to think that a variety of types of milkweed need to be grown in what is now the corn belt zone, and that this might be achieved best if farmers were paid to provide this environmental service – and to offset their marginal loss in reducing acreage put to crops.

Substitute euro for butterfly, savings for milkweed and youth for environmental service. And come up with something to stand in for the corn belt.