2015: a small recovery, the agreement on Syrian migration

Since the Arab Springs in 2011 (1) and as a result of growing instability in the region, migration transit through Turkey has become an increasing issue for the whole Europe. Turkey then assumed the role of guardian of the Schengen area, protecting it from irregular migration. These events brought about an unattended rapprochement between Turkey and the EU. 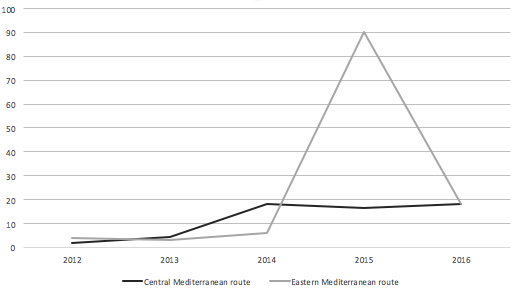 In 2017, Turkey has been the country hosting the highest number of refugees in the world, around 3 million, coming from Syria. A Joint EU-Turkey Action Plan was then agreed in 2015, aiming at bringing order in the migratory flows: at the end of 2015, in fact, a Turkey Refugee Facility was set up, in order to provide a coordination plan between the EU and Turkey. The agreement foresees financial support from the EU to Turkey, for the best management of reception centres on the Turkish soil. For the biennium 2016-17, the Commission has granted 3 billion euros, in addition to the 10 billion allocated by the Turkish Government to organize locations, food, schools for 800,000 children and health assistance. This measure has decreased, from one year to the other, the number of refugees coming on boats from Turkey to Greece, from 2,000 per day to just 200 (90% less). Turkey, in the last decade, has transformed from an emigration country into an immigration and transit country. In the effort to meet pre-accession requirements, Ankara has undertaken key reforms in the fields of migration and asylum in 2000s. The EU is using once more the carrot of membership as an incentive to gain Turkey’s cooperation in migration control: this is – according to many Western institutes of research2 – the reason behind the decision (November 2015 EU-Turkey summit) of the European leaders to open chapter 17 on “Economic and Monetary Policy”, which had been blocked for eight years by France’s veto.

As part of the EU-Turkey deal, the European Commission had also promised to lift the visa obligation for Turkish citizens by June 2016. International NGOs and human right organizations have disagreed with Turkey being recognized as a safe third country for migrants and asylum seekers, on one side; on the other, the visa liberalization has never happened, also due to the attempted military coup of July 2016, which complicated the alignment of Turkish legislation on personal data protection and anti-terrorism with EU standards. In spite of these serious issues on the table, the migration deal is still alive and contributes to keep the Turkey’s EU accession in the leader’s agendas.

1 Arab Springs are a wave of pro-democracy protests and uprisings that took place in the Middle East and North Africa beginning in 2010 and 2011, challenging some of the region’s entrenched authoritarian regimes (Encyclopaedia Britannica).