The Biggest Brother 2: Euromaidan in black and white

Once again, media from east and west are watching what’s happening in a remote country through the lens of their own audience, and the output is a distorted image. If sometimes is damn true that things are much easily understood when seen from far, that’s not the case of the case of euromaidan rallies in Ukraine. 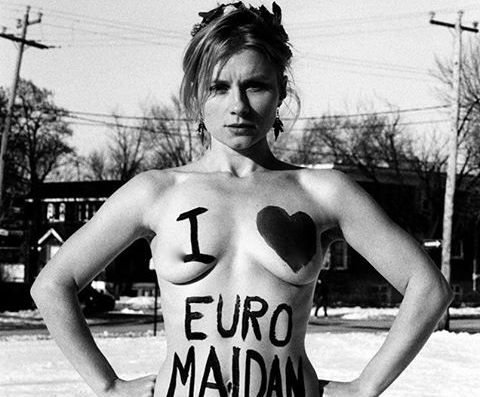 Mirror, mirror on the wall

Taking a look at the reports delivered by European media, I’m often overwhelmed by the impression of watching an image reflected in a mirror. It’s more or less like the magic mirror on the wall, where reporters and analysts – and even European Union’s representatives – just see what they want to see. And don’t ask for anything else.

I already wrote how deceptive is the interpretation of the pro-EU rallies as “the voice of Ukrainians” and that the 2010 polls, that gave the power to Mr. Yanukovych, were judged compliant with the international standards. Paradoxically, the Euromaidan rallies, which are viewed by Europe as the most genuine form of people’s democracy, are widely backed by Svoboda, the ultranationalist party tainted with xenophobia, homophobia and negationism, which celebrates as a national hero Stepan Bandera, the pro-Nazi leader of the OUN (the Organization of Ukrainian Nationalists during the WWII). To Svoboda, which gained the majority of votes in western provinces, the proximity to Europe is seen as nationalist and anti-Russian in scope. So, very little to do with the European principles and values.

The eastern side of media

At the other end of the spectrum is the interesting point of view offered by Russian media. “It’s obvious that Russia has launched a massive disinformation campaign against EU and the agreement with Ukraine”, twitted yesterday Carl Bildt, Foreign minister of Sweden.

While Medvedev said the appearance of EU representatives in Kyiv “cannot be called anything else but crude interference in a sovereign state”, Russian flagship TV Pervij kanal deployed all its weapons: when something like two to five hundreds of thousands of Ukrainians flooded Kyiv’s Independence Square to call for Yanukovich’s to resign  Russia’s TV reported “a few hundred people” shouting in the street. But the Oscar for misleading information went to the star anchor Dmitry Kiselyov of Rossiya 24, in the real sense: during a live coverage from Kyiv on December 8, Ukrainian journalist Vitaly Sedyuk interrupted the reporter to present the head of the Russian channel a golden statuette.

“Here is an Oscar for your channel and for Dmitry Kiselyov, for nonsense and lies in live broadcast” Sedyuk shouted at the camera.

And the winner is…

Recently appointed at head of a new media conglomerate ordered with a decree by Mr. Putin, Kiselyov seemed to make any effort to deserve the award. Recently he described Vitali Klitschko, world heavyweight boxing champion and Ukrainian opposition leader, as gay icon. And only a few days before he gave his witty explanation of the protests in Ukraine: “Sweden, Poland, Lithuania, does that remind you of anything. It’s the same alliance Peter the Great defeated at Poltava in 1709. Carl Bildt hails from an old Swedish aristocratic family, some ancestors were generals, and he was a CIA agent in his youth. Amusing as it sounds it now looks like they want revenge for Poltava”. Yes, amusing. Or not so much.

Russian channels are widely watched throughout the post-Soviet space by hundreds of million people speaking Russian and feeling somehow part of the same big community. The Kremlin-sponsored RT channel – with an estimated budget of $300 million – an international news company that broadcasts in English, Spanish and Arabic, and runs the world’s most watched news website with 1.1bn viewers. And now it must be also added the new established Russia Today news dreadnought. Big, bigger, biggest brother!