The role of the currency

The “lira” was first adopted as official currency by the Ottoman Empire in the mid-19th century: the currency has had, since the beginning, a volatile history, with several major devaluations and recoveries.

Inflation has been a constant challenge throughout the 20th century. In an attempt to provide stability, Turkey periodically pegged the lira’s value to globally prominent currencies: in 1946, the Turkish lira pegged to the US dollar for the first time. The exchange rate of 2.8 lira to 1 USD was maintained until 1960, when the lira was devalued for the first of a long series of interventions. The meagre valuation of the first Turkish lira ultimately led to the creation (2005) of the “new Turkish lira”, also known as the “second Turkish lira”. The debate of whether to adopt or not the euro as the national currency has been an ongoing political issue since the European Union’s inception.

If 1995 is selected as the base year for the real exchange rate, Turkish lira appears overvalued in the early 1990s, undervalued in 1994 (the crisis led to the overshooting of TL), in equilibrium between 1996 and 2000 and undervalued again in 2001. In addition, there are notable fluctuations also in the GDP, be it in dollar terms or in TL, which coincide with the years of financial crises (1994) or with the earthquake in Turkey (1999).

It could be argued that the Customs Union, since its application, has in some way favoured the restoration of the country’s credibility, especially after the 1994 crisis, and has therefore also been thought to curb inflation and stabilize the volatility of the Turkish lira. Despite this stabilization factor, the 2016 political turmoil (the attempted coup d’État) has been so severe and unpredictable that it has inevitably impacted the economic sector: inflation should close 2017 at 10.8%, above the 5% target of the Central Bank, the exchange rate of the Turkish lira vs. Euro should be 4.02, compared with 3.35 in 2016 (1). 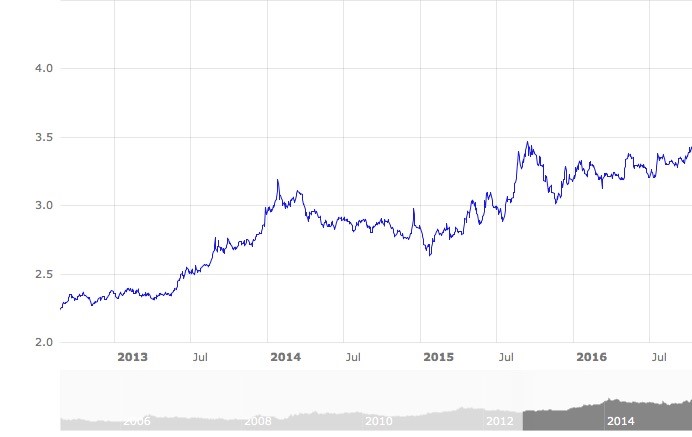 The modernization of the Customs Union could definitely improve the stabilization factor, but this will only be possible if supported by an accurate monetary policy and by a structural stability of the country, not only internally but also in the relations with the main international partners, EU in the first place.