Tunisia : two years after the Jasmin Revolution the country is stuck between ‘national dialogue’ and the political impasse

Back in October 23, 2011, Tunisia organized its first free and democratic elections since 1956, year of the independence and liberation from French tutelage. Some time before,  Mohammed Bouazizi’s desperate and heroic act had triggered what would become for posterity the largest uprising in the Arab world. 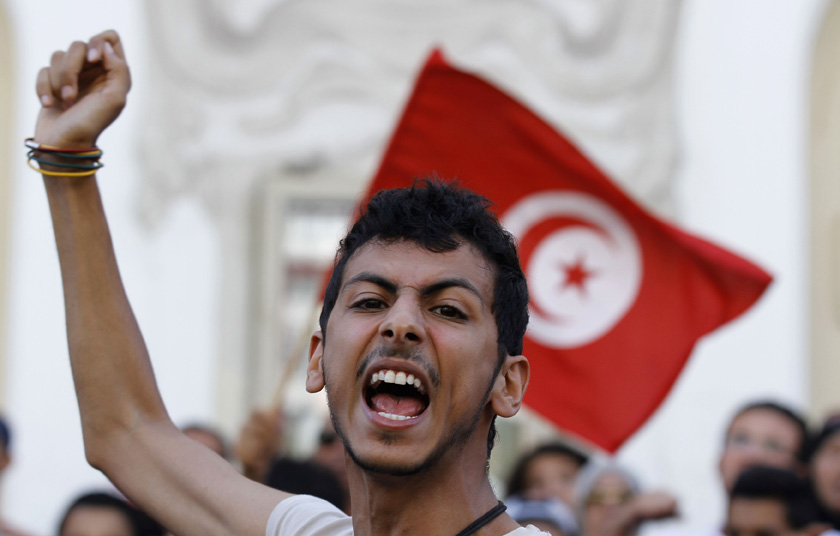 One year after the ‘Jasmine Revolution’, Tunisia organized the first democratic election since dictator Zine el Abidine Ben Ali was ousted from power. Tunisia turned the page on its political history and it seemed that the West and the other countries of the Arab world could witness a kind of political miracle, as a movement started from the bottom and supported by the Tunisian élites and young generations seemed to be able to turn a thirty-year dictatorship into a democracy, a new landmark for other countries tangled in dictatorships in the rest of the Arab-Muslim world.

Unfortunately, two years after the Jasmin Revolution, the hope of democratic transition came to a standstill and the ‘national dialogue’ to exit the political impasse is not launched yet. Tunisia’s Islamist Ennahda party, who won elections with 41.5 per cent, has so far failed at the institutional but also at the economic level.

Ennahda has been unable to give a political change and is accused by the opposition to cover the violence and oppression of the Salafis who are plunging the country into religious obscurantism. In Tunisia there are about 400 mosques controlled directly by the Salafis, cities are witnessing the return of the ‘niqab’, theater performances and art exhibitions are blocked, the opposition media are silenced. Ennahda has also proven to be unable to fight against unemployment, social discomfort and failed to dismantle nepotism and corruption. Some tragic events have also made Ennahda political path even more arduous than it should be. The double murder of Chokri Belaïd – Secretary-general of the Democratic Patriots’ Movement – and Mohammed Brahmi, deputy in Sidi Bouzid village (Mohammed Bouazizi’s hometown ) and founder of the Attayar Achaabi Party. Two political opponents killed with the same weapon. Perhaps a sign that there is a plan to silence the opposition?

The terrorist threat still casts its long shadow over democratic transition. Last week, the Tunisian army bombed the positions of the radical Islamist group Ansar al- Sharia along the Algerian border. Ansar al- Sharia has about 100,000 militants and is involved in the murder of Chokri Belaïd, Mohammed Brahmi and in several terrorist attacks against police and army.

The chaos in Libya had also created a fertile ground for the proliferation of terrorist factions threatening Tunisia stability. According to a poll, 50% of Tunisians think current Constituent Assembly is no longer legitimate and another poll shows that the ruling party Ennahda collects nowadays only a third of the voting preferences.

Despite all this, the negotiations between Ennahda and the opposition trying to give shape to the ‘ road map ‘ to exit from the quicksand are still going on. It all started in Paris, at the Bristol Hotel. Here Ghannouchi agreed to sign a ‘road map’ whose major points are: the government resignation by the end of October, the appointment of an independent office, the elaboration of a Constitution draft and an agenda for the future presidential and legislative elections. The opening of the negotiating table was attended by all major political actors: the president Moncef Marzouki, PM Ali Laarayedh,  the president of the National Constituent Assembly Mustapha Ben Jafar, representatives of the General Union Tunisian Labour (UGTT), the leaders of the ruling government (Ennahda, Ettakatol and CPR ) and the opposition coalition, the National Salvation Front.

By the anniversary of the first free elections after Ben Ali’s fall, Ali Lâarayedh should have signed a document certifying the government’s resignation and the start of the national dialogue. In the same day the opposition marched along the Avenue Bourguiba as in the days of the Jasmine Revolution.

Apparently, two distant worlds are opposing each other: one who’s unable to pick up the legacy of the revolution and the other looking back nostalgically to it to discredit the current establishment. It is unclear whether the two fields will be able to meet but it is clear that they have to find a common way for the good of Tunisia and the Tunisian people, exhausted after two years of lacerations.