Turkey’s economy and its relationship with the EU

According to the external consultant BKP Research & Consulting 2016 study, the BPTF has positively impacted both the EU and Turkey. The study estimated that in 2016, EU’s exports to Turkey and Turkey’s exports to the EU were 8.7 billion euros (9.1%) and 6 billion euros (6.5%) higher, respectively, than they would have been without the BPTF. 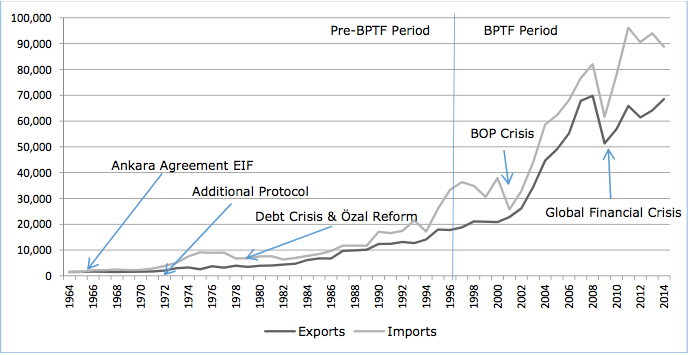 From a State to a market economy

From the Second World War until the early 2000s economic crisis, Turkey’s economy has been characterized by weakness and volatility. The low productivity growth during the 1970s was essentially due to policies inspired to economic dirigisme (e.g. import substitution, subsidisation of agriculture, etc.), which brought about a sub-optimal allocation of resources. In spite of some steps towards reforms and liberalisation in the 1980s, economic growth was curbed by periodical crises, in a weak institutional and regulatory environment matched with inadequate macro-economic policies. The 2000/2001 crisis led to the breakdown of the currency peg to the US dollar, a sharp depreciation of the Turkish Lira and a contraction of GDP by almost 6% in 2001. As often happens, the crisis formed a strong incentive for reforms, which have favoured the economic recovery in the years 2002-2007.

Adamopoulos and Akyol (1) have considered Turkey “an interesting case study of relative stagnation”, as it is the only OECD founding member which has not converged to the US per capita GDP since 1950. In addition to the above mentioned causes for the weak growth, the two economists have added the heavy labour market rigidities and a too long permanence of resources in agriculture. After 1980, Turkey started a gradual process of economic liberalisation by removing price controls, subsidies and interest ceilings, freeing foreign trade, relaxing capital controls, encouraging FDI and expanding the private sector. As a result, foreign trade and FDI increased significantly, even if from very low levels. However, growth performance in the twenty years 1980-2000 has been characterized by cycles: periods of industry-led rapid expansion have alternated with balance of payment crisis, devaluation of the Turkish Lira and austerity programmes affecting the domestic demand for foreign goods.