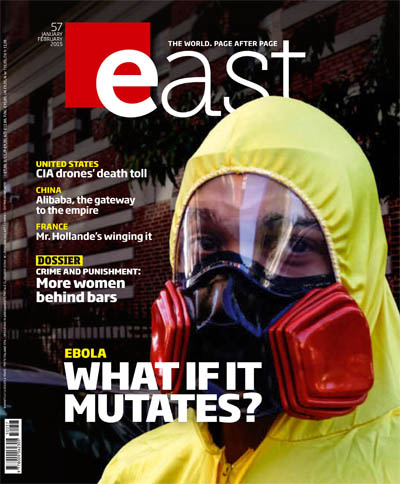 The new issue of East will be at newsstands, bookshops and ready for download from the 1st of January.
Ebola comes from afar, an eye witness account from Africa by Médecins Sans Frontières. Vaccines and therapies are currently being developed. The social and economic impact of the virus on West Africa.

Europe: Ireland after the crisis, Greenland’s black gold, bad luck hasn’t spared Britain’s Royal Family. The German army is on the retreat while military services are on sale in the Balkans, but the war on Isis is a cultural one. Ukraine is moving decidedly west, while France is just treading water. Italy launches a worldwide campaign against violence on women and in the meantime we await the advent of a truly European lawyer.

Chronicles: the adventurous origin and experimentation of vaccines, the King of Spain and Doctor Balmis. The White House, a golden cage for its restless leaders.

World: a map of the army’s fighting over forlorn Libya. While Oman displays the tolerant face of Islam, Tehran won’t change its nuclear strategy.

Alibaba conquers the world’s computers but is also the gateway to the Chinese market. The Dalai Lama is ahead of the game, he says he won’t be reincarnated in China.

A look at the kill tally for CIA drones and the Indonesian resurrection in the wake of the tsunami ten years ago. Have you ever played Kabaddi and Sepaktakraw? Net neutrality is pie in the sky, as is the innate goodness of man, or so say the scientists.

In the Dossier: crimes and criminals of various kinds, natural and juridical persons, authorities, institutions and international sanctioning organisations. Everyone has their punishment and their atonement.

By the way, have you stolen anything in a shop recently...?

How did a simpleton king obsessed with hunting end up financing the first-ever global immunisation campaign?

Shoplifting, a crime for everyone

Have you stolen something in a store lately?

TECHNOLOGY & RESOURCES -10 years after the Christmas tsunami in Indonesia

A natural disaster brought peace and, for now at least, the chance of a future.

EAST Forum 2014 Promoting talent and entrepreneurship: a path to growth

The 9th edition of East Forum was held in Brussels on 24 October. Its theme was the promotion of talent and entrepreneurship as a path to growth.

EDITOR’S NOTE - Chocolate and a plague

A Belgian chocolate maker has changed its name from ISIS Chocolates to Libeert in order to avoid an inadvertent association with the Islamic State after sales unsurprisingly crashed on decapitation news.

More than a battlefield, the North African country is a chessboard.

An expert witness recounts an epidemic without modern precedents.

Libya: now’s the time to choose

We cannot afford a failed state on a Mediterranean shore.

The Queen of the Internet is Chinese

After its IPO, Alibaba is worth more than Facebook.

About that failed nuclear agreement with Tehran

There was room for progress, but the magic moment slipped away

Goodbye and hello - The long goodbye of Jose Manual Barroso and the even longer phasing-in of Jean-Claude Juncker masked something of a revolution in the EU’s institutions, not least the Commission.

But the scars of its economic crisis are slow to fade.

Chinese investments in Russia are replacing those from Europe.