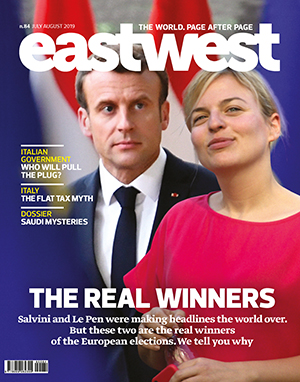 THE REAL WINNERS – The conformation of the new European Parliament. Euro-scepticism (25%) hasn't won out: over 200 million European citizens took part in the vote delivering more power and voice to the new Green and Liberal parties.

ITALY - How long will the unbalanced yellow-green majority last? Salvini's League and the Grillo/Di Maio 5 Star Movement have been at each other's throats for weeks but neither seems to have a real interest in pulling the plug. The legislation could go the distance but not necessarily with the same personnel in charge.

DOSSIER – The 'mysteries' behind the Saudi dynasty: an unresolved schism dating way back between the western 'brotherhoods' and Islamic fundamentalism.

POLITICS - Who will pull the plug?

ECONOMY - The myth of the Flat Tax

The Middle Eastern board game

The “Deal of the Century”

Turkey-Qatar: the reasons behind
an alliance