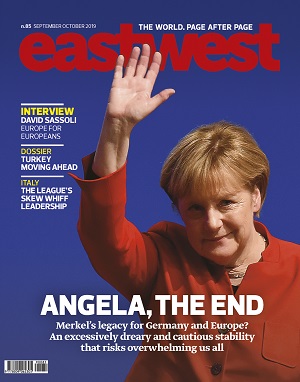 ANGELA, THE END – The helmswoman of Europe and of the status quo is preparing her succession, that will influence both German and European affairs: new energy and new driving forces are needed to relaunch both Germany and the European Union.

EXCLUSIVE INTERVIEW – David Sassoli explains how the European Parliament, which he has presided over since July, must and can become the home of Europe's citizens and the seat of its democracy. “No home is built by decree, it has to be a political choice.”

DOSSIER – Post-Erdogan Turkey is taking shape. Anyone who loses out in Istanbul, loses Turkey, paraphrasing the Turkish President who was defeated last July in Istanbul for the second time.

ITALIA – The League's skew whiff leadership: an analysis of the intricate relationship between Matteo Salvini's League and the European Union.

A drawn out status quo

ECONOMY - VAT and the "white knight"

Sultan Erdogan's time is slipping away

BOOKS - How Turkish politics is changing

Rise and fall of the AKP