The English paradox: out of Europe, lost to the world

The UK economy benefits from EU membership, but British hearts are still not convinced. 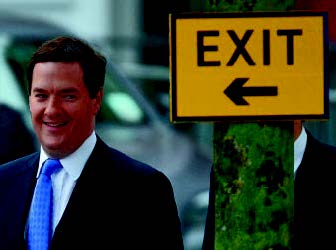 Exactly one year ago, in issue 46 of East, I was considering the future of relations between the European Union and the United Kingdom, taking my cue from David Cameron’s rather off-the-wall policy statements at that time. So let’s take a look at what’s happened over the last twelve months.

“If we cannot protect the collective interests of non-eurozone member states then they will have to choose between joining the euro – which the UK will not do – or leaving the EU.”

Speaking last month, British Chancellor of the Exchequer George Osborn reasserted London’s position on the United Kingdom’s permanence in the European Union, just one year after Prime Minister Cameron announced his intent to call a referendum in 2017 – should his party be re-elected in 2015 – to decide whether or not to stay in the EU.

Osborne’s strong words come at a very delicate juncture in British politics, which sees Cameron losing ground in the polls and the 2015 elections looming ever closer. Current polls would seem to indicate that the Tories are likely to obtain 34% of the vote compared to Labour’s 39%, and would therefore need the support of the Lib-Dems, or, to Cameron’s chagrin, of the ultra-nationalist and euro-sceptic UKIP party, which is very much on the rise.

David Cameron is, moreover, getting stick from his own side as well: 95 Conservative party MPs wrote to him formally demanding that the UK parliament be given the power to veto every aspect of EU law that threatened ‘national interests’ (following the example of Germany). Yet while the English don’t seem to care much about London’s permanence in the EU, they are perhaps not aware of exactly how much it contributes to the country’s economic interests. In the preliminary findings of government reviews of the balance of competences between the EU and the UK, experts, NGOs, businesspeople and MPs had to admit that it was in Britain’s interest to continue operating within the European Union in matters of the economy, trade, defence, foreign policy, technology and, generally speaking, a whole range of global challenges.

Being a member of the EU and the single market guarantees London political clout and brings economic benefits it would otherwise not enjoy. A group of top representatives in British business and the financial sector, including the chairman of the London Stock Exchange and the head of the Confederation of British Industry, wrote to Cameron reminding him that leaving the EU could cost the British economy – along with all those companies that have been able to expand thanks to their dealings with the EU – over €30 billion.

British economist Andrea Boltho and his American counterpart Barry Eichengreen recently calculated that the European single market brings an added value of +5% to the EU’s GDP. And this state of affairs is not lost on many of the foreign investors in the UK, given recent statements by some business leaders, including the co-chief executive of Goldman Sachs International, who threatened the investment bank would relocate its European hub (with a current staff of 5,500 in London’s Square Mile) if Britain were to leave the EU. The same approach was officially echoed by Toyota, Ford and Nissan, leaders of an industry that generates an annual turnover of almost €50 billion and employs more than 700,000 people.

In spite of all this, at recent EU summits, Cameron – who is well aware of these figures – has voiced his strong objection to much European legislation, in the hope of intercepting the euro-scepticism now rife in the UK.

But this is a very dangerous game: the EU referendum card could end up being counterproductive in many ways, one being the indirect effect it could have on the upcoming Scottish referendum on independence in September. It’s quite likely that the majority of Scots will ultimately vote to stay in the UK, yet the fear that Great Britain might leave the EU the following year might convince the Scottish, who have always been pro-Europe, to consider a permanent divorce from London. In that case the (Dis)United Kingdom – having lost an important part of its territory – would find itself competing with such economic giants as India and China without any European backing, and thus sadly face being gradually yet unavoidably side-lined from the stakes that matter.

When listing the main reasons for the EU’s decline that could force the British government to take the unwise decision to abandon the European ship, George Osborn pointed to lack of innovation, rampant unemployment and excessive welfare costs. And he explained: either things change and we stop this decline, or the United Kingdom will leave the EU.

The most interesting part of Osborne’s speech, however, is not so much the threat of leaving the EU, but his focus on the urgent need to reform the framework of the European Union: “The biggest economic risk facing Europe doesn’t come from those who want reform and renegotiation, it comes from the failure to reform and renegotiate”. He added: “It is the status quo that condemns the people of Europe to ongoing economic crisis and continuing decline”. London is very worried by the prospect of greater integration between euro countries, which would effectively leave non-euro nations facing a rather unpleasant crossroad.

Personally I remain convinced that the British government, despite their current efforts being primarily and perhaps exclusively focused on market integration, would find it impossible to turn down the opportunity of climbing on the bandwagon of a Europe that found the courage to head resolutely towards a federal future.